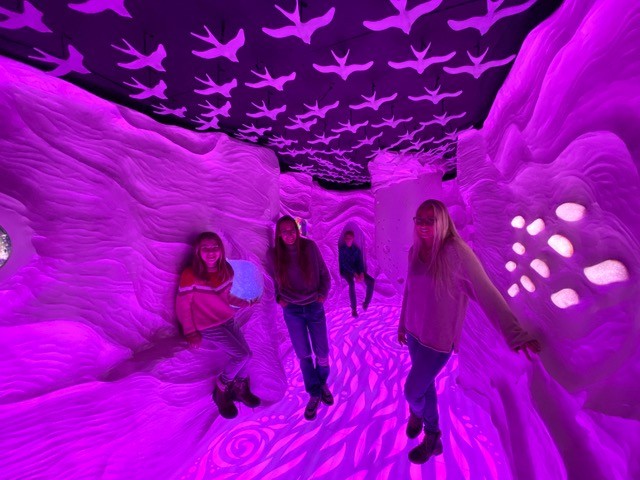 The U.S. Department of Agriculture announced on May 24 that it has awarded a $4.75 million loan guarantee to support the development of a new type of Vermont art destination called Babaroosa. The 20,000-square-foot, multi-sensory, experiential venue is scheduled to open at the Essex Experience in 2024.

“But that’s just the beginning,” said Robert, an acupuncturist, medical researcher and entrepreneur. His wife is the founding director of Davis Studio, an art school in South Burlington.

The Davises said their permanent, multifaceted art installation will cost about $23 million to build and launch. They named it after the babirusa, a spiral-tusked boar depicted in an Indonesian cave painting estimated to be about 45,000 years old. When the painting was discovered in 2017, experts determined it to be the world’s oldest figurative art.

The couple said Babaroosa will employ about 45 people full time plus dozens of Vermont artists and other makers who will collaborate to create the 60 loosely themed exhibits within the venue. Some will be iconic anchor spaces, while others will change periodically. The Davises project about 500,000 people a year will visit Babaroosa from around New England. 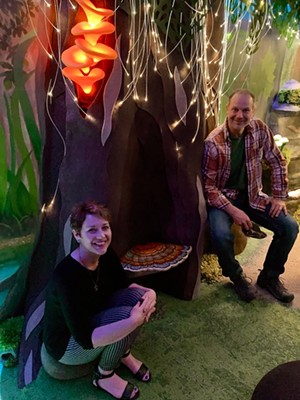 That number far exceeds the 350,000 who flock annually to Ben & Jerry’s Waterbury ice cream factory, Vermont’s current top single destination. But the Davises point to the success of Santa Fe-based Meow Wolf — a similar type of large-scale, permanent, immersive art installation with three locations around the U.S. ­— which they consider an inspiration. There is not yet anything similar in the Northeast.

The couple lived in Santa Fe before moving to Burlington in 1991 and have done extensive market analysis comparing the two cities. The results were encouraging, they said.  “We have eight times more people within a three-hour drive than Santa Fe does,” Robert noted.

“It’s weather-proof, year-round entertainment for all ages. That's the niche that could be filled,” Teresa said. “This would put Vermont on the map in a really unique way.”

Towards Babaroosa’s start-up costs, project partner and Essex Experience owner Peter Edelmann will contribute $5 million worth of real estate, where the venue will be located. The Davises are also in the process of raising $10.8 million in investor equity. They declined to specify how much they have secured so far but said that Roxanne Scully, who cofounded Burlington’s Hula with her husband Russ Scully, has been a “very generous seed funder.”

South Burlington electric aircraft pioneer Beta Technologies has also contributed funding for two prototypes built in shipping containers. Dubbed “Flow” and “Mushroom Forest,” they are examples of the different experiences visitors to Babaroosa will pay a projected $36 ($26 for students and seniors) to explore over a two- to three-hour visit. 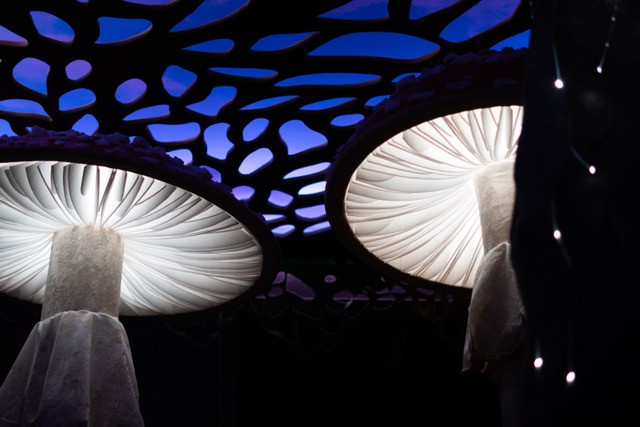 Teresa described "Flow" as primarily a visual experience, “a color bath experience with really just a lot of flowing energy.” "Mushroom Forest" is more of a tactile experience with a lot of different textures and layers, she said. Neither are currently open to the public.

The couple said they were motivated to create Babaroosa after witnessing the power of immersive art to engage people of all ages and to positively impact health and wellbeing.

“As an art educator and artist, I have had a long-term interest in installation and immersive art,” Teresa said. When Davis Studio was located on Pine Street, her team created two small, immersive experiences for the South End Art Hop in 2015 and 2106.

To help people envision immersive art, Teresa explained, “Typically, when someone says, ‘art,’ you think of a picture in a frame on a wall or a sculpture on a pedestal.”

Immersive art, by contrast, “is like walking inside of a piece of art,” she continued. “The art will cover the floor, cascade from the ceiling. You are surrounded by the art in a way that you can become part of the art and, in some cases, you can interact with the art,” she said. “It moves you along the continuum from being a spectator to being more of a participant.” 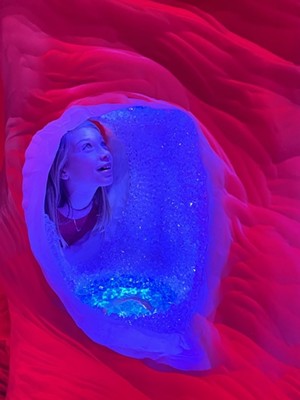 The Davises also believe that Babaroosa has the potential to deliver more than entertainment.

Robert has a vivid recollection from the couple’s first visit to Meow Wolf in Santa Fe in early 2017. Looking around at fellow guests, the medical researcher said, “If I could have done an MRI scan of their brain at this moment, we would [have seen] some cool stuff going on. People had this blissed-out look whether they were 80 years old or 8 years old and everybody in between.”

Research has documented, Robert said, how “just plain old art museums” can help people with chronic pain, depression and PTSD. “I saw it through the lens of like, Wow, this is an experience that is not just entertainment.”

The Davises acknowledged the influence of Meow Wolf, which created its first site in Santa Fe in 2016 and launched two more in Las Vegas and Denver in 2021. In a September 24, 2021 New York Times review of the 90,000-square-foot Denver Meow Wolf, art critic Ray Mark Rinaldi wrote, “Anyone looking to get their mind blown, and then blown again, will deem Meow Wolf a thrilling fun house.”

“While Meow Wolf is our inspiration,” Teresa said, “I would say we have a different sensibility and aesthetic.”

Karen Mittelman, executive director of the nonprofit Vermont Arts Council, recognizes that Babaroosa is a heavy lift to pull off. She also believes it will invigorate the arts community and spark broad economic and cultural vitality in the state.

As someone with perspective on the national art scene, Mittelman underscored that Meow Wolf has been “a pretty spectacular success.” But, she added, “You can’t take a cultural attraction from elsewhere and plop it down in Vermont. Babaroosa is really built with Vermont communities and artists and creatives in mind. That matters."

Correction, Monday, May 30: This story has been updated to reflect that Babaroosa will open in Essex.