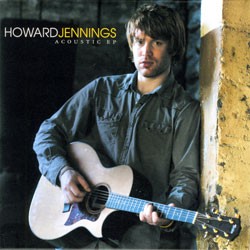 Plattsburgh’s Howard Jennings returns with Acoustic EP, a follow-up to his 2007 debut, Appreciation. The former youth hockey star turned guitar-wielding troubadour scores modest results. At times, he almost legitimizes frequently made comparisons to similarly softhearted tunesmiths such as Dave Matthews and Jack Johnson. At others, however, his work, in particular his lyric writing, bears the perhaps predictable clumsiness of a jock-turned-artist, not unlike, well, Jack Johnson.

Matthews is an acknowledged, and obvious, influence. The idolatry is borne out by the first track, “Your Side.” A descending acoustic line, vaguely reminiscent of the opening sequence from “Crash Into Me,” quickly gives way to Jennings’ Matthews-esque mellow growl. Much like his hero, Jennings attempts opaque poetry. But unlike Matthews — at least prior to his dumping-a-chemical-toilet-into-the-Chicago-River era, which is actually an apt allegory for his canon since — Jennings stumbles under the weight of youthful earnestness. Though his intentions are pure, his metaphors, if they qualify as such, are scrambled and artless. For example: “More than the taxes we are paying / Greater than the gallons of oil we are burning / More than the sky is depleting / Just like we eat more than we need, yeah / Nothing is for certain, except the girl / The girl in the world I’m livin’ in.”

Jennings’ lyrical folly continues throughout. But the nadir is reached on the disc’s fourth cut, “25 to 89.” The song is something of an ode to both wide-eyed innocence and, of course, love. But Jennings’ stilted turns of phrase fall short of capturing the essence of either. He opens with “Perhaps I’m too optimistic / But life’s so short and I don’t want to miss it / Being naive to the world really isn’t that bad.” He continues with the mincingly redundant line “I’m standing here drinking and thinking with the thoughts in my head.” Then, toward the tune’s climactic bridge, he offers a real head scratcher: “I want to feel my toes in your sand.” Uh . . . what?

Writing foibles aside, Jennings has an undeniable knack for catchy melodies. This is evident throughout, but particularly on album closer “When My Mind Starts to Go.” The number is easily Acoustic EP’s best and offers a glimpse at the young songwriter’s nascent potential. When he’s not mining the stylized vocal deliveries of more accomplished artists, he possesses a smooth, emotive tone. If given time to become comfortable with his natural abilities and sharpen his observations, Howard Jennings has a chance to sidestep unnecessarily lofty comparisons and truly come into his own as an artist.