Howard Coffin Talks About the Year Vermonters 'Froze to Death' 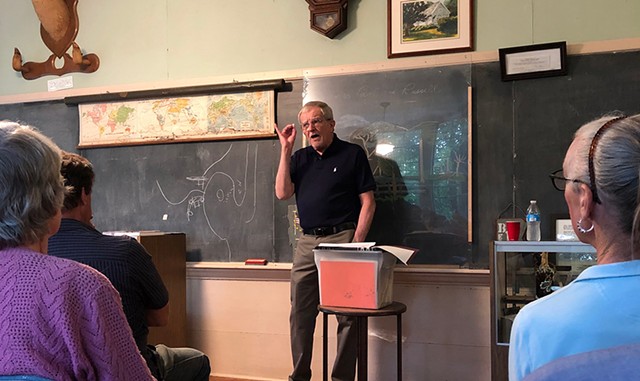 One of Vermont's strangest years on record was 1816. It was also one of the coldest. That year the state endured snowstorms in June and a frost every month. The skies were perpetually dark, and locals reported everything from failed crops to mysterious lights. Those dire and seemingly inexplicable oddities led some to suspect supernatural causes, including an angry and vengeful God.

The real explanation was slightly more mundane: A volcano had erupted in Indonesia in 1815, spreading ash around the globe. But rural Vermont in the 1800s was an isolated place. News traveled there slowly, if at all. According to historian Howard Coffin, most Vermonters of the time were in the dark, literally and figuratively. The apocalyptic weather left them frantically searching for answers.

"Volcanic ash was blocking the sunlight," Coffin, 78, says. "But the people of that age had no idea what was going on. They were terrified. And it led to a religious revival."

Coffin is best known for his writings on the Civil War and his stint as late senator Jim Jeffords' press secretary. For the past several years, though, he's been researching the curious events of 1816 in Vermont and throughout New England. In the process, he's uncovered bizarre historical gems that he has compiled into what he says is the most popular lecture of his 25-year speaking career: "Vermont, 1800 and Froze to Death: The Cold Year of 1816."

As part of a Vermont Humanities Council lecture series, Coffin presents that talk on Friday, November 1, at the Highland Center for the Arts in Greensboro. Seven Days spoke with Coffin by phone about Vermont's "year without a summer."

HOWARD COFFIN: [Laughs.] All of a sudden, the weather turned cold, and there was a frost every month in Vermont. A volcano had erupted in Indonesia, and it cooled the world as the mass of ash spread around the globe and made it difficult to grow crops. It was a bad time, particularly for Vermont.

SD: How did you come to be interested in that year?

HC: I grew up hearing about 1816 from my grandmother, who grew up on a farm in Pomfret. If it was a really cold morning, she'd say, "Boy, Howard, it feels like 1800 and froze to death." I never paid much attention to it until, one day, I asked her, and she told me about 1816. "The year without a summer," she always said.

Then, in 2015, my wife was dying. I had been an off-and-on churchgoer my whole life, not steady by any means. But I knew I was gonna need a church. The United Church of Bethel is presided over by an old friend of mine, Tom Hardy, who is the best preacher I've ever heard. So I called Tom and asked him if he minded if my wife and I started coming to church. I found out right after I got there that they were about to celebrate their bicentennial — the church was built in 1816. I started looking into the history, and the creation of the church was connected to the bad weather.

SD: So it was part of a religious revival in Vermont?

HC: It was. The year is progressing, your corn is dying and the skies are dark and the weather is getting worse and you can't figure out what's causing this. There probably were some newspaper accounts of a volcano exploding in the South Pacific, but there was no connection made until the 20th century.

Even the governors of the states put out proclamations urging people to pray, to try to get God's favor. Because the common diagnosis was that God was angry, so start building churches! It's a fascinating story.

SD: What was the explanation for the weird lights?

HC: Late in 1816, the weather began to go back to normal. But then, in January of 1817, a weather phenomenon called St. Elmo's Fire came. And steeples lit up, fence posts lit up, cattle lit up. And then people's hair began to flame — not catch fire, but have a flame-like glow around them. Of course, that scared the hell out of people. Like, "Now He's really after us."

SD: Without giving too much away, do you have a favorite anecdote from your research?

HC: The weather was pretty normal in Vermont until June of 1816. Then, on the sixth of June, there was more than a foot of snow in the Northeast Kingdom. Some of the farmers had already sheared their sheep. So the ones who hadn't already shipped off their wool wrapped it back around their sheep. They made coats for them.

The original print version of this article was headlined "Cold Comfort: Howard Coffin Talks About the Year Vermonters 'Froze to Death'"