How Vermonters Are Helping Ukrainians Fight for Democracy

In the U.S., the weeks between Thanksgiving and New Year's Day are filled with gatherings of friends and family, and shopping — for gifts, for food and drink. Many Ukrainians are doing these things, too. Only sometimes the stores or apartment buildings they're headed to are destroyed by Russian missiles.

Since Russia invaded Ukraine on February 24, more than 6,500 Ukrainian civilians have died, according to a November 14 report from the United Nations high commissioner for human rights; another 15 million people have left the country. But there are still many citizens living in Ukraine and fighting to keep it free.

Colin Hilliard, deputy director of the Burlington Business Association, has been there recently and met some of them; for the past eight months, he's been involved in efforts to bring them food and other supplies from Vermont donors. "Ukrainians are winning this war. Their resilience is incredible and has led to a lot of remarkable gains lately," Hilliard said in a phone interview a few days before Thanksgiving.

But though the Ukrainians have seen some success, he points out that they still need outside support. "These communities that are being liberated, they don't have electricity and haven't had internet access in six months. They don't have running water. The humanitarian crises unfolding in newly liberated cities are terrible ... There are 7 million internally displaced people in Ukraine. Staggering levels of human displacement happened almost overnight and continued as the war churned on."

For months, Ukrainians have been preparing to transition into a cold, dark winter similar to the ones we experience in Vermont, noted Hilliard, whose work has expanded to include helping Ukrainians stay warm. "Imagine surviving a Vermont winter but without reliable heat, power and food. Imagine surviving under these conditions under daily air raid sirens reminding you of the never-ending threat of missile attacks," he said. "It's going to be brutal."

Building a pipeline between Vermont and Ukraine

Hilliard had never been to Ukraine before the war. He was invited to travel to the region by Adam Roof, chair of the Burlington Democratic Party and a former city councilor. Roof got the idea from a friend in Boston who called him in March and invited him to join a loosely organized relief mission.

"I felt morally obligated to go," Roof said. "I thought, If you can go, you should go. You must."

Within a week, Roof and Hilliard had leveraged their connections with local businesses and philanthropists and partnered with the Vermont Council on World Affairs to gather $15,000 in cash, as well as over 1,000 pounds of in-kind contributions from donors including Burton Snowboards, SkiRack, Darn Tough Socks, Vermont Teddy Bear, Twincraft Skincare and Revision Military. The University of Vermont Medical Center donated some medical supplies. Roof and Hilliard received large hockey bags to carry it all from the hockey teams at UVM and Saint Michael's College.

In mid-April, they brought it all to Medyka, a Polish border town; up to 1,000 people were crossing there daily at that time. Many other displaced Ukrainians were massed on either side of the dividing line.

But large international relief organizations were slow to mobilize for the conflict because of its political nature — and the danger of delivering humanitarian aid in a war zone. Instead, a loosely organized army of volunteers, including Roof and Hilliard, stepped into the breach.

This decentralized effort has been remarkably effective: A study by the UK-based research group Humanitarian Outcomes found that, in the first three months of the war, "virtually all" humanitarian aid for displaced Ukrainians came from thousands of community groups and volunteers who rushed in to help — even though those groups have received just 0.24 percent of the donations intended for relief efforts.

Roof and Hilliard became part of the effort when they arrived in Medyka. While distributing the goods they brought from Vermont to refugees crossing the border, they quickly connected with people there who had vans, as well as some ex-military volunteers willing to drive deep into Ukraine and distribute goods. They found a warehouse that they could fill with food while the vans were out making deliveries. They used Vermont dollars to buy shopping carts full of produce at Cash and Carry, the Polish version of Costco.

And they built a relationship with British volunteer Simon Massey, who ended up running the official humanitarian aid station there. Together, they worked to set up a food distribution program that kept going after they departed Poland at the end of April. 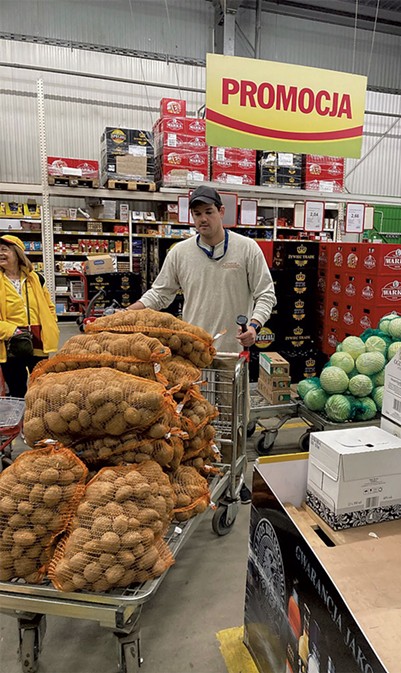 Roof and Hilliard's April trip went so well that the pair returned to the region in August to do more work with Massey's crew. This time, they traveled into Ukraine to provide food and supplies to shelters, including one in Bryukhovychi, a community to the northwest of Lviv.

It was located in an unfinished hospital building, Roof said. "The property was about three-quarters of the way built, but you still had walls unfinished, wires hanging. The kitchen was not fully set up and had to be outfitted to serve the more than 100 people living there," Roof said. "The main goal for us at that shelter was to make it more of a home — more dignified, more livable." They brought beds, bedding, cabinets and kitchen appliances — and delivered over 1,000 pounds of food there and to various other shelters — all paid for by generous Vermonters.

As soon as the kitchen was set up, the Ukrainians got to work. "The women in the shelter made this amazing meal our last day," Roof said. They prepared traditional Ukrainian dishes as a thanks to the volunteers who'd brought the food. "They wanted us to taste the food, to know that we were appreciated," Roof remembered. "We saw many examples of how strong, kind and grateful the Ukrainian people are, and this gesture was particularly special."

While at dinner, through translation, Roof and Hilliard learned that one of the women had lost a grandson that morning in the fighting and that another of her grandsons, who was also with the Ukrainian military, had been missing for months. He was later found dead.

That she insisted on making this food and joining them for the meal "brought us to tears," Roof said.

Something else they noticed at the shelter: Children's art was hanging everywhere, on walls, doors and refrigerators. The paintings and drawings gave the unfinished institutional space a homier feel.

They arranged for some of that art to be delivered to Vermont for a fundraiser for further relief efforts through Massey's newly formed nonprofit, Actions Beyond Words (see below).

Hilliard emphasized that larger, more established organizations have done "incredible work," since the early days of the crisis, and they have the resources to sustain missions over many years. But he and Roof have personally experienced the effectiveness of working with people "outside of the red tape."

Roof noted that, unlike some larger efforts, Actions Beyond Words doesn't have large expenses for staff or office costs. "It's incredibly lean and incredibly fast," Roof said. "If you send $100 to us, $98 of that is quickly going to get turned around into fresh vegetables or a generator or a bed."

Roof acknowledged that there are many important causes to support locally but added that the people of Ukraine who are resisting Russian occupation are "fighting a battle for all of us here on Earth." What happens there has ripple effects that will be felt here and around the world.

"I think it's one of the more potent examples of a potential shift in the world order that could have really dire consequences — not just for us near term, but for our future generations," he said.

On Wednesday, January 11, Adam Roof and Colin Hilliard will host a fundraiser at Burlington City Hall Auditorium, in conjunction with Burlington City Arts, to raise money for continued relief efforts in Ukraine.

"We're going to tell some of the stories about resiliency of the Ukrainian people and the impact that Burlington and Vermont has been able to have in the region," Roof said. Artwork made by Ukrainian children will also be on display.

The money raised will benefit Actions Beyond Words, a new crisis-response nonprofit launched by Simon Massey and fellow volunteer Travis Goode. Roof is slated to join the board of directors for the organization in December.

Pre-pandemic, Massey and Goode worked with an international performing arts organization. Massey started out years ago as a music teacher but had a talent for logistics. He became the group's bookings director and operations manager, pulling together 1,200 shows a year; Goode was the IT guy — until COVID-19 shut it all down.

Massey was in Lincolnshire, England, when he saw BBC news coverage of the invasion. He hopped in his Volvo and drove to Medyka to help Ukrainian refugees. He had planned to stay for two weeks; that turned into more than two months.

Massey used his organizational skills to help set up the relief center in Medyka and to develop a network of sources and contacts on both sides of the border. He brought in Goode to help with the infrastructure, building a website and establishing nonprofit status so they could officially accept donations.

"Simon and Trav set up a remarkable network capable of providing sustained support to thousands of people across Ukraine — primarily funded by Vermont dollars," Roof said. "If you want to support Ukrainian people, this is a real grassroots way to do it. Donations go directly to people in need and are deployed almost immediately."

In October, Massey and Goode visited Vermont to deliver artwork from Ukrainian children and work with Roof and Hilliard on plans for the coming months. Both men spoke about the carnage and devastation they'd seen in Ukraine.

Massey, who frequently travels deep into the country, recalled a trip to a shelter near Kharkiv to drop off supplies. He showed a photo of a group of smiling men and women on a set of stairs. Shortly afterward, he returned to the site with another load.

"The steps weren't there," he said. The building had been destroyed. No one could, or would, tell him what happened to those inside.

It was a low point for him. He recalled talking with one of the other volunteers about the futility of delivering vanloads of supplies to a country at war. "I said, 'This feels like a drop in the ocean.'"

The man's reply stuck with him: "He said, 'Drops make the ocean.'"

Learn more about Actions Beyond Words at actionsbeyondwords.net/vfe. The art show and fundraiser “Resilience — The War Through Ukrainian Children’s Art” will be held Wednesday, January 11, 6 to 8:30 p.m., at Burlington City Hall Auditorium.