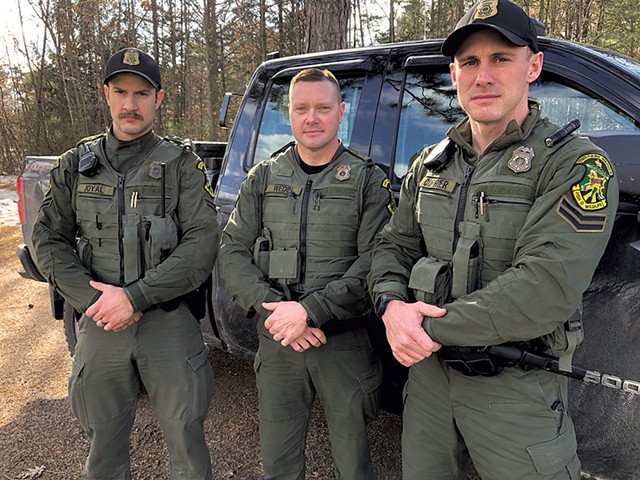 Five law enforcement agents surrounded a split-level ranch in Winooski at 1:19 p.m. on November 8. Protected by bulletproof vests and Glock semiautomatic pistols, they pounded on the front door of the Cedar Street home. No one answered, but the officers had a warrant, so they entered an unlocked back door and roused their surprised suspect, 42-year-old Justin Cianchetta, from a nap.

Minutes later, they found the contraband they were looking for: five containers of salmon filets in the freezer and another two in the refrigerator, according to court papers. The bust was for poaching — but not the kind done in a skillet. The officers, all game wardens, cited Cianchetta for taking fish illegally from a no-fishing section of Hatchery Brook in Grand Isle, where salmon from Lake Champlain migrate every fall to spawn.

Cianchetta admitted to poaching the prized Salmo salar, and he isn't the first angler to succumb to temptation at the spot, said Lt. Carl Wedin, the game warden who supervised the investigation and expanded on details available in court documents during an interview with Seven Days.

While anglers can legally fish for salmon 1,100 feet away in Lake Champlain, Cianchetta allegedly netted them from a protected pool not far from where they were raised at the Ed Weed Fish Culture Station. The big, leaping fish can literally be scooped up by the handful — and some people can't resist doing just that.

"They are trophy-size fish, anywhere from five to eight pounds probably. Not only is it fun to catch big fish, it's more meat to eat," Wedin explained during an interview last week.

Cianchetta could not be reached for comment, and no one answered the door at his home last Friday. He's been cited to appear on December 19 at Vermont Superior Court in North Hero on two counts of taking fish illegally. If convicted, Cianchetta faces up to $466 in fines, $100 in restitution, and potential revocation of his license to hunt, fish and trap in Vermont for one year.

The last of those punishments, for an avid angler, may be the harshest of all. On his Facebook page, where he describes himself as a former pastry chef at Junior's restaurant, Cianchetta can be seen posing proudly with an array of large fish. Game wardens sleuthed the very same Facebook page for clues that helped them snare Cianchetta, according to filings they made to successfully secure a search warrant from Judge Howard E. VanBenthuysen.

This particular fish tale began in October, when scores of lake salmon started converging on the brook near the Grand Isle hatchery, which is operated by the Vermont Fish & Wildlife Department. "You come here in October, and you would see fish everywhere," hatchery manager Kevin Kelsey said during an interview at the site, noting the observation deck that accommodates onlookers who come to watch the annual migration, which usually lasts through early November.

But his workers soon started noticing spear and hook marks on the arriving fish. Those are indications — which they see almost every year — that poachers are literally wading into the pool where the silvery, black-speckled salmon gather, according to Kelsey. Fishing is illegal along the brook that flows from the fish culture station under West Shore Road and into Lake Champlain just north of the Grand Isle ferry dock. Three large signs warn that the spawning waters are "CLOSED TO FISHING."

Salmon have keen homing instincts, which drive them to lay their eggs in the same waterways where their own lives began. The ones from Ed Weed may travel hundreds of miles through rivers and the lake to find their way back to Hatchery Brook to lay their eggs, according to Kelsey. "They are an incredible animal," he said. 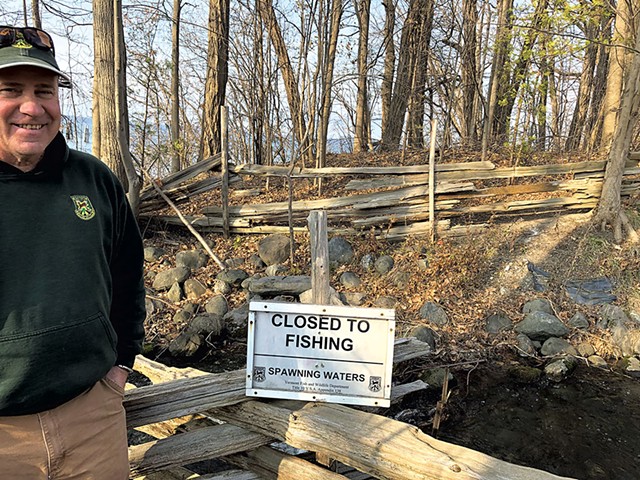 Kelsey pointed to a fish trap in the brook. During the migration, salmon swim into them. The fish are then loaded into a tank on a truck for the short drive to the hatchery across the road, where workers sedate the pregnant female fish and gently squeeze the eggs from their vents. They put the eggs in trays of purified water and then add milt, or sperm, that has been stripped from the male salmon. After 18 months, when the fertilized eggs have grown into adolescent smolts, they are released into Hatchery Brook and other local waterways.

Last year, the hatchery raised about 145,000 landlocked Atlantic salmon as part of a restoration effort that dates back to 1972. At that time, the local fish had all but disappeared as a result of overfishing and degraded river conditions. Today the salmon population is considered healthy, and fishing the species is allowed year-round, including in competitions. The largest salmon caught in Vermont, which measured 12 pounds, 10.4 ounces, came from Lake Champlain in 1994, according to the state Fish & Wildlife Department.

Poaching near the hatchery during the salmon migration undermines the restoration effort and the sport-fishing it supports on the lake. But even anglers who understand and support the hatchery's mission sometimes break the rules, Kelsey observed. "Big fish in a concentrated area does funny things to people," he said. "It brings out some pretty bad behavior."

The migration coincides with bow hunting season for deer, when game wardens are usually too busy for illegal fishing investigations, Wedin said. This year, however, things were relatively slow for the wardens. So when staff at the hatchery called to report the poaching, Wedin decided to organize a crackdown.

He assigned a half-dozen wardens to do overnight surveillance at Hatchery Brook. They staked out the waterway for six nights, two officers per shift, at hidden positions they declined to share with a reporter. They also reviewed photos from hidden cameras placed at the site by staff at the hatchery.

Shortly after 5 a.m. on November 5, game wardens Jeremy Schmid and Josh Hungerford were on stakeout duty. They observed a man sitting in a 2000 Dodge Neon at the parking lot near Hatchery Brook, according to court papers. The man got out of the car, put on fishing waders and proceeded to fish in Lake Champlain, near the mouth of the brook. He had a video camera, possibly a GoPro, strapped to his chest, Schmid wrote in a search warrant affidavit. Although the man was fishing in a legal spot, the two wardens ran the license plate on the Dodge Neon before departing. It was registered to Cianchetta.

The next day, November 6, Schmid spoke with Ben Rooks, fish culture engineer and deputy game warden, who advised that the hidden camera had captured several pictures of a person illegally taking fish from Hatchery Brook. These included a photo taken between 7:27 and 7:47 a.m. the previous morning — shortly after the other wardens had left the scene.

According to the affidavit, Rooks also had pictures of a man wearing similar waders taking fish illegally from the brook around 3:10 a.m. on October 23.

Schmid then searched Cianchetta's Facebook page and found a November 5 post showing a photo of him with a fish in the early morning hours, wearing a video camera and waders similar to the ones in the hidden-camera photos.

Based on these facts, Schmid wrote, there was "probable cause to believe that Cianchetta was taking fish in closed Hatchery Brook" and probable cause for a search warrant.

According to Wedin, Cianchetta was "more cooperative than a lot of the people we deal with." He admitted to poaching the fish in the brook because "they weren't biting in the lake," Wedin said.

Cianchetta has not been arraigned, and he has not entered a plea. Grand Isle County State's Attorney Douglas DiSabito justified the sting.

"The legislature deems this activity illegal," he said. "The statutes, we take them all seriously. Whether it's poaching a fish or driving under the influence or shooting big game out of season, we take it very seriously."

There has been at least one other poaching case in recent years at Hatchery Brook, he noted. In 2015, former Grand Isle Selectboard member Ron Bushway was charged with taking fish illegally from the brook and giving false reports to law enforcement. Bushway was convicted on the charges and ordered to pay more than $2,000 in fines.

It's unclear what will happen in the Cianchetta case. But the fish won't be served up anytime soon. The salmon that the game wardens confiscated is being stored in an evidence freezer at the Vermont State Police barracks in Williston.

Does that constitute a happy ending? "Depends who you ask," Wedin said. "Probably the defendant wouldn't say that."

Fishing is supposed to be a sport, he added: "If you do it by the rules, it remains a sport ... Where you cheat, then it's not."