How to Solve the Pollinator Problem? 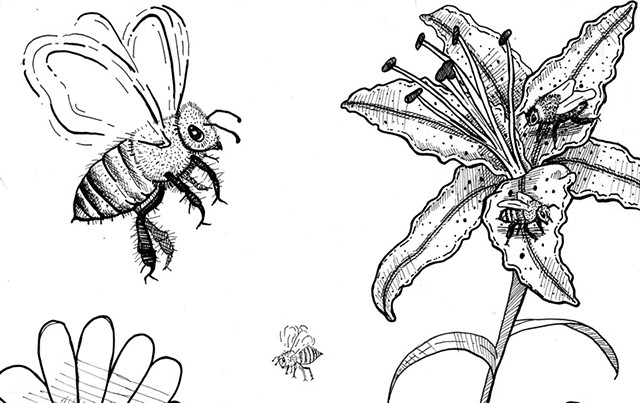 Members of the insect species Bombus affinis, commonly known as the rusty-patched bumblebee, used to spend a great deal of time in Vermont. An important pollinator of such crops as apples, cranberries and wildflowers, the bee was, as Vermont Center for Ecostudies conservation biologist Kent McFarland put it, "dirt common" in the Green Mountain State just a few decades ago. But no one has seen one here since 1999. Bombus affinis now survives in a few isolated patches of the world, none in Vermont.

Pollinators are the bees, butterflies, birds, moths, beetles and other creatures that carry pollen from one blossom to another, thus assuring fertilization and the production of the seed and fruit of plants. A drastic decline in pollinators could have severe repercussions, including large-scale bankruptcy, worldwide malnutrition and environmental catastrophe. The issue is complex and multifaceted, but it is not intractable — yet. At a pollinator symposium in Burlington last week, the prevailing attitude was not "We're screwed" but "We can fix this."

The Agency of Natural Resources convened "Beetles, Bees, Butterflies: A Symposium on Vermont's Pollinators" at ECHO Leahy Center for Lake Champlain to bring together experts and those affected by the sharp decline in pollinators' numbers and diversity. The enthusiasm in the room suggested that Vermonters are ready to help solve the pollinator puzzle.

At the daylong event, researchers, ecologists, policy makers, farmers, biologists, conservationists and beekeepers shared their knowledge and teamed up to consider solutions. McFarland joked that it was easy to discern attendees' roles from their attire: Policy wonks were among the few dressed in business casual; ecologists and conservation biologists wore their native plumage of flannel, fleece and baseball caps. Professions aside, nearly all of the presenters remarked that Vermont's commitment to environmentalism and its wealth of natural resources make the state eminently qualified to tackle the pollinator issue.

ANR secretary Deb Markowitz explained that the conference came about because her agency recently had to place three bee species, including Bombus affinis, on the endangered list. "We thought that was remarkable," she said, "and also telling of a larger problem." As several presenters stressed, "large" doesn't begin to describe it. Yet they seemed to agree that the situation is not hopeless.

Keynote speaker Rick Keigwin Jr., deputy office director for pesticide programs at the U.S. Environmental Protection Agency, forcefully drove home both of those views. No fewer than 15 federal agencies have been charged with addressing the pollinator crisis, he noted. It was no surprise to see the EPA and the U.S. Department of Agriculture in the mix, but less expected were the Federal Emergency Management Agency and even the Department of Defense. How can FEMA help? By incorporating pollinator habitats into disaster-relief construction efforts, Keigwin said. And the DOD manages millions of acres of land, including prime planting ground for the flora that pollinators need for food and habitat.

Keigwin and others referred to the 2015 action plan devised by the federal government's interagency Pollinator Health Task Force — the very existence of which clearly inspired optimism in many symposium attendees. The plan, said Keigwin, "lays out in pretty exquisite detail what we're doing, why we're doing it, what we know and what we don't know — and, in those areas that we don't know about, what we're going to do to learn."

The task force's three main goals are a reduction in honeybee overwintering losses to no more than 15 percent within 10 years (the current five-year average is 30 percent); restoration of the monarch butterfly population to 225 million by 2020 ("a very, very ambitious goal," said Keigwin); and creation of pollinator-friendly habitats on seven million acres of federally managed land within five years.

Taylor Ricketts is a professor of environment and natural resources and director of the Gund Institute for Ecological Economics at the University of Vermont. He opened the symposium on a positive note, arguing that Vermonters can do something about the decline of pollinators.

Ricketts made his points with striking data: Seventy percent of the world's most important crops, and 80 percent of the world's total plants, are pollinated by animals. The estimated annual market value of those crops is between $235 billion and $577 billion. And, he said, about 275 species of bees reside in Vermont.

Then he outlined one of the Gund Institute's local projects, which involves gathering pollinator data, and the pollinators themselves, from numerous Vermont blueberry farms. Over a three-year study, Ricketts and his team found that honeybees, which are often brought into the state from other regions to pollinate crop plants, pollinate only 9 percent of Vermont blueberries. Native bumblebees and other species handle nearly all the rest, contradicting the common assumption that honeybees do the lion's share of pollination. Climate, it appears, isn't the only factor driving the behavior of pollinators: In Michigan, by contrast with Vermont, honeybees accomplish 94 percent of blueberry pollination, said Ricketts.

"What is it about these farms that changes the bee diversity?" Ricketts asked rhetorically, before acknowledging that this ongoing study has not yet come up with an answer. He thereby introduced a theme picked up by nearly every other presenter: Our knowledge of pollinators is incomplete.

Leif Richardson, a postdoctoral fellow at the Gund Institute, highlighted several of those information gaps. We don't know the number of fly species in Vermont or which crops they pollinate, or anything about recent changes in their abundance. We know next to nothing about the distribution ranges of the many local species of pollinating moths. And, though we have some ideas about what has caused the collapse of local pollinators such as bees, Richardson said, we don't know exactly how those factors interact.

Richardson was one of several presenters to identify root causes: habitat loss due to land development, disease, heavy pesticide use and climate change. "We need to address these threats now," he said, "and we need better assessment of pollinators' status."

Here's another important knowledge gap: Nearly half of the 24,000 to 43,000 kinds of organisms that reside in Vermont are invertebrates — insects, in most cases — and many of them are officially classified as "conservation status unknown." We know these organisms exist from observing general pollination patterns, but we don't know what they pollinate, how their populations are faring, or even what the organisms are.

Mark Ferguson, a Natural Heritage Inventory zoologist with the Vermont Fish & Wildlife Department, said upon presenting these data, "We still need to gather information on invertebrate groups. Pollinator conservation depends on [it]."

Pollinator conservation also depends on a change in local farming practices. Vern Grubinger of the UVM Extension and the USDA Northeast Sustainable Agriculture Research and Education program drew applause for his passionate calls for sensible and informed pesticide use. "Messy farms and messy yards are good, too," he said. "Holes in your flowers means you're doing the right thing."

The advent of integrated pest management has worked a paradigm shift in farmers' pest control, emphasizing a range of tactics over the blanket application of dangerous pesticides. Yet, Grubinger said, psychological barriers to that new paradigm remain hard to surmount. Orderly rows and traditional monocultures, he noted, may be the stuff of pretty photos, but they rarely help pollinators thrive. He cited several Vermont farmers whose "messy" farms provide diverse pollinator habitats, thus reinstating a natural balance that obviates the need for excessive pesticide use. "Vermont is ahead of the curve with its [agricultural] knowledge base," Grubinger said. "We can build on that."

Markowitz enthusiastically embraced the idea that Vermont can and should be a laboratory for innovative solutions to pollinator decline. "One of our greatest strengths as a state," she said, "is that we have so much natural infrastructure ... We still have that traditional land-use pattern: a village center with farms around it, followed by forest. So we don't have to invent something new, wholesale. We just need to do what we're doing differently and more mindfully."

After several presentations and coffee refills, participants hunkered down in single-issue sessions to trade ideas and develop action plans. The room was positively abuzz with possibilities.

An optimistic mood prevailed even in the face of the daunting challenge. Charles E. "Chaz" Mraz, a third-generation beekeeper and owner of Middlebury's Champlain Valley Apiaries, has ample reason to be concerned about the large-scale die-off of pollinating insects. Yet, though he was hardly waving a victory flag at the symposium, he sounded generally upbeat.

"What I'm seeing is a progressive awareness of the problems," Mraz said, "whereas, for a long time, people didn't even know what the problems were."

Plenty of work remains to be done, he continued, particularly in educating the public about the short- and long-term effects of pesticides. But Mraz said he's encouraged by the relatively small, tight-knit and informed communities taking on the issue of pollinator decline in the Green Mountain State. Tackling the issue head-on "could be a boon to farmers here," he said. "We'd start to look green again."

For more about protecting pollinators, read about the Xerces Society — a national nonprofit working to conserve invertebrates and their habitats — at xerces.org.