How to Ski This Season Without Going Bankrupt 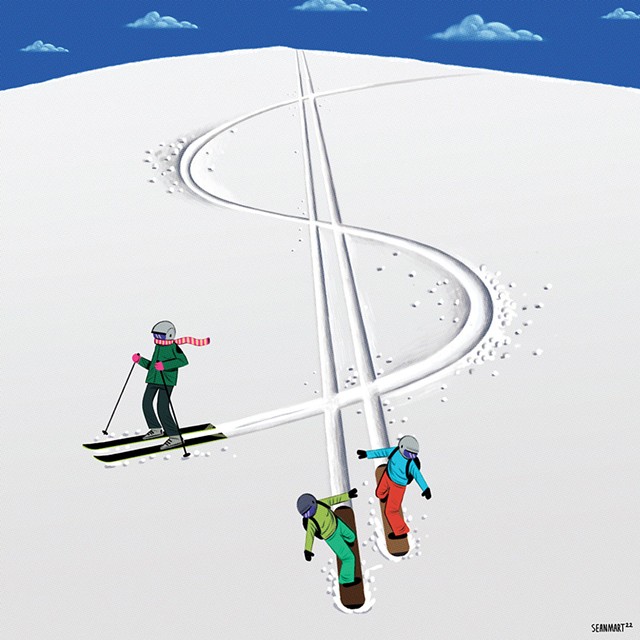 Skiers and riders face some tough choices this winter. Their love of sliding on snow hasn't changed, but the cost of doing it has increased a lot more than their wages have.

The U.S. Travel Association keeps track of the cost of activities such as skiing via the Travel Price Index, a collection of travel-related items from the Consumer Price Index, which is calculated by the U.S. Bureau of Labor Statistics. In September, the overall CPI registered an 8.2 percent increase over the same month in 2021. The year-over-year increase in the TPI is even worse: 10.2 percent.

The items on the TPI that are particularly relevant to Vermont-based skiers and riders include "motor fuel" (18.8 percent increase), "recreation" (2.8 percent increase), and "food and beverage" (8.3 percent increase). Anecdotal evidence from my own checkbook indicates that skiing and riding costs have soared even more than the data on "recreation" might capture. The season passes to Killington that I bought for myself and my two kids for the 2022-23 season show a 12 percent price increase over last year's. I'm not looking forward to finding out how much a hot chocolate costs in the lodge.

But don't give up on this season. While skiing and riding will never be as affordable as, say, snowshoeing, there are ways to save money and still have fun — with a little planning and flexibility.

If you're looking for discounts on single or multiday lift tickets, a good place to start is the "deals" section of Ski Vermont's website. Most ski areas in the state offer discounts for active and retired members of the military, seniors, young children, and Vermont residents. Burke Mountain, for example, has special Vermonter rates every day: $65 for adults and $55 for kids ages 6 to 18.

Skiing at off-peak times is another good option: Think early and late in the season, midweek, and non-holidays.

Smaller ski areas usually have lower prices; some of the cheapest skiing in the state for adults can be found at Lyndon Outing Club in Lyndonville ($15 lift ticket), Ascutney Outdoors in Brownsville ($20), Northeast Slopes in East Corinth ($15) and Cochran's Ski Area in Richmond ($19). At Bolton Valley, you can get a night skiing ticket after 4 p.m. for as little as $25. Many of these places offer kids' lift tickets for even less or free.

Mad River Glen in Waitsfield, possibly the birthplace of frugal skiing, has one of the least expensive day tickets in the industry: $39 when purchased in advance. That's intentional, according to Ry Young, marketing and events manager at the cooperative.

"We try to keep skiing as affordable as possible because of a love of the sport, a desire to keep passing the torch to our friends, neighbors and the next generation," Young said. "The ski industry needs new skiers in order to survive, and right now most of the resorts are pricing out potential new customers."

Mad River Glen is one of many resorts where it's less expensive to buy lift tickets online at least a day in advance. Bryan Rivard, the director of communications at Ski Vermont, also advises that consumers "keep an eye out for ski area promos throughout the season — if you know which mountain you're traveling to, getting on their email list is an easy way to take advantage of any special offers."

For dedicated skiers and riders who want to be on the slopes more than 15 days per season, a season pass usually makes the most sense. If you ski enough, you can get a lot of value out of the Epic and Ikon passes, which give you access to dozens of resorts around the world.

Early bird pricing for most season passes has already expired this year, but the Indy Pass is still a great deal if you're up for some in-state travel. At a cost of $329 for adults and $149 for kids, you get two days of skiing at each of four local resorts — Bolton Valley, Jay Peak, Magic Mountain and Saskadena Six — plus many other independent resorts around the country.

Skiing with little kids is as much work as it is fun — which is to say, a lot — so it's nice that their lift ticket prices are usually affordable and sometimes even free. For fifth graders, Ski Vermont offers the Fifth Grade Passport, which provides 90 days of skiing across the state for just the $20 cost of enrollment.

Skiing and riding are gear-intensive sports in which safety is a paramount concern, so it's best to look for new gear on sale or slightly used gear that incorporates modern technology. In the fall, ski clubs often host ski swaps, which can be great places to pick up lightly used gear. Skiers need to make sure their boots and bindings are properly adjusted by a certified technician at a ski shop.

Many ski shops offer package deals on skis, boots, bindings and poles, especially early in the season. Late-season shopping can also be a way to pick up discounted gear, but it's a hit-or-miss strategy, since inventories are usually low by spring.

If you don't want to purchase a new suite of gear for yourself or your children, seasonal leasing is a good option. For usually less than $300 per adult and $200 per child, you can get high-performance equipment for the entire season. This approach makes the most sense for kids, who tend to outgrow their equipment every year. It's wise for adults at least to buy their own boots, so they can custom mold the liners to their feet and ankles.

If you've ever wondered how it would feel to exist in a monopolistic economy, try eating at a ski area. When you're hungry after a session on the slopes, you're probably not going to leave the ski area for a meal, and resort owners know this and charge accordingly. At the lodge, chicken fingers and fries or a bowl of chili might have the laughable price tag of nearly $20. A cup of coffee? That'll be $3.75. The exceptions are the resorts with less expensive lift tickets, which tend to stick with the frugal vibe at their restaurants.

For price-sensitive skiers, though, there's only one reliable way around the high cost of resort fare: Bring your own food. Stuff your pockets with on-the-go snacks that don't freeze easily — cookies, a PB&J, granola bars, cheese slices, dried fruit, nuts — and pack a lunch and a thermos with your preferred hot drink.

With gas prices eating into our budgets, many of us are thinking about other options for transportation. Vermont lacks a robust public transportation network, but there are bus services that can get you to certain mountains.

The Bus, for example, serves the Rutland area; trips from downtown to Pico Mountain and Killington are $2 each way. Green Mountain Transit runs the Route 108-Mountain Road Shuttle, taking skiers and riders from Stowe Village to the Stowe base area for free. It's an especially attractive option this year, because Stowe will be charging $30 per car for parking on Fridays, Saturdays, Sundays and holidays, except for cars with four or more passengers.

The Mad River Valley has the Mad Bus, Mount Snow has the MOOver, and Tri-Valley Transit offers the Snow Bowl Shuttle, which travels from Middlebury to Rikert Nordic Center and Middlebury Snowbowl.

It might be tempting to sit out this year, but if skiing and riding prices are at all-time highs now, they have nowhere to go but up. And, as ski filmmaker Warren Miller said, "If you don't do it this year, you'll be one year older when you do."

The point is, go skiing while you still can, have fun and try not to succumb to that $20 hamburger.