How to Make Your Backyard an Avian Attraction 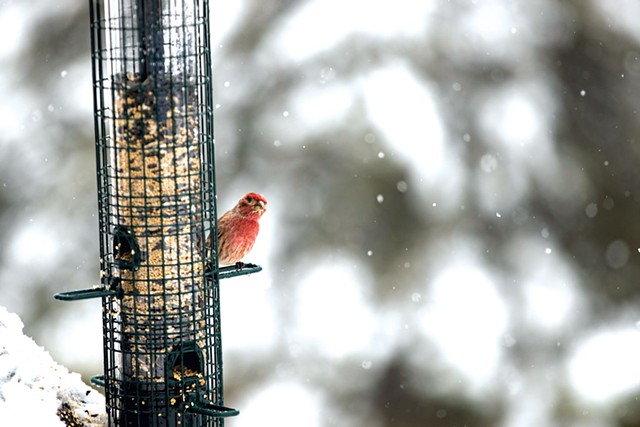 When I bought my house nearly a decade ago, the previous owner told me he had fed the birds in the winter, and some of them returned each year. Notably, a cardinal couple — they mate for life, he said.

Of course, I can't swear that they're the same pair, but a male and female cardinal have shown up every late November, almost like clockwork. To my delight, they spend the winter in my backyard, feasting on seed, hiding in the cedars, bossing around smaller avians at the feeder and looking pretty against the snow.

Here's further evidence that birds, like humans, are creatures of habit: This summer I had a rather unsightly arbor removed from my backyard. Standing about five feet from my kitchen windows, it was the structure from which I hung bird feeders when the cold came. I'd purchased new pole-type hangers, but I hadn't yet installed them when Mr. Cardinal showed up. I happened to be in the kitchen when I noticed him fly in, land on the ground and look up quizzically at where the arbor used to be. I know it's anthropomorphizing, but I could swear his expression said: "What the hell?"

The next day I installed the poles, filled and hung the feeders, and hoped my feathered friends hadn't left in a huff.

They may have done just that initially, perhaps scoping out the neighborhood for a better offer. I wasn't sure how much loyalty — or habit — influenced their behavior. But after a couple of days, the cardinals reappeared at the feeder, still acting entitled.

This little drama reminded me that my avian acumen was pretty rudimentary. I had been, ahem, winging it. So I decided to get some tips from an expert on backyard birding.

Anna Morris is the lead environmental educator at the Vermont Institute of Natural Science in Quechee. She's had that position for two and a half years, she said in a phone call. The public education center at VINS focuses on environment and wildlife rehabilitation, offering classes and workshops, nature camps, and teacher instruction. As it happened, the center had recently given a class on pretty much what I wanted to know, and Morris kindly gave me the nutshell version.

The first and most important topic was feeders, without which one's backyard will remain essentially a no-fly zone in winter. "The more different types of feeders you have, the more types of birds you'll attract," Morris said, noting tube feeders, suet cakes and hopper dispensers as examples. "Like people, birds like different foods."

Finches and other small birds enjoy niger seed, which is appropriately teensy. Bluejays, Morris noted, prefer peanuts. (Who knew?) And a great variety of birds like black oil sunflower seeds. Most commercial products contain some mixture of these seeds and others.

"What do you put suet on?" I asked Morris. I told her that the one time I bought a block of the fatty stuff, along with a simple wire cage, a squirrel ate the whole thing in short order. She described two other, more effective suet feeders: one that hangs upside down from a tree branch (in theory, preventing rodents from getting the goods) and a baffled unit with a domed top.

Morris stressed a couple of other guidelines for keeping feeders: timing and cleanliness. Most Vermonters who live outside urban areas know all too well that birdfeeders can attract bears in the spring. That's not a visitor you want in your backyard. "Put them up in November; take them down in March," she said succinctly. One exception: Nectar feeders for hummingbirds can go up any time.

This was news to me. "I've only been cleaning them at the end of the winter," I confessed guiltily, wondering whether my feeders had been the source of any birdie pandemics.

When the seed is gone, remove the feeder and wash it out with a dishwashing detergent such as Dawn and a long brush, Morris advised. (Bleach is not recommended on plastic feeders.) Then make sure the feeder is dry before refilling the seed.

I already knew birds need nearby hiding places — the critters live in a constant state of high alert. "Yes," Morris agreed, "it's important that birds have natural places to forage and for protection." They'll usually dash into nearby trees or bushes, but even a thick brush pile does the trick. "And any native berry-producing plant is good for the birds, too," she added, stressing the word "native" — some invasive species can be toxic.

"The Audubon Society has a great online native plants database," Morris said, "and it points you to nurseries in the area that carry them." Green Mountain Audubon Center in Huntington is an excellent local resource, as well. Aptly, one good plant for our region is common winterberry (Ilex verticillata). But there are hundreds of choices.

I had a few other questions for Morris. First, how do birds stay hydrated when standing water is frozen? Do they eat snow? "A lot of birds don't drink water," she said. "Maybe in hot weather." But if you provide a heated birdbath in the winter, she said, they'll flutter around in it despite the cold.

What about that mating for life thing? I asked. "That's true for all songbirds," Morris replied. "Until one dies; then they get another [mate]." Birds may be faithful, but apparently they don't waste time grieving.

Speaking of moving on, my final question for Morris was which birds have the longest commute. "A lot of the finches travel from northern Canada," she said. "The cedar waxwings, bohemian waxwings..."

And there are so many more. After our conversation, I scrolled through several websites, marveling at the lives of these tiny migrating creatures. They're not just cute; they're kind of miraculous. Least I can do is offer dinner on their stopover. And, this winter, I'm making it my mission to serve up some squirrel-proof suet.