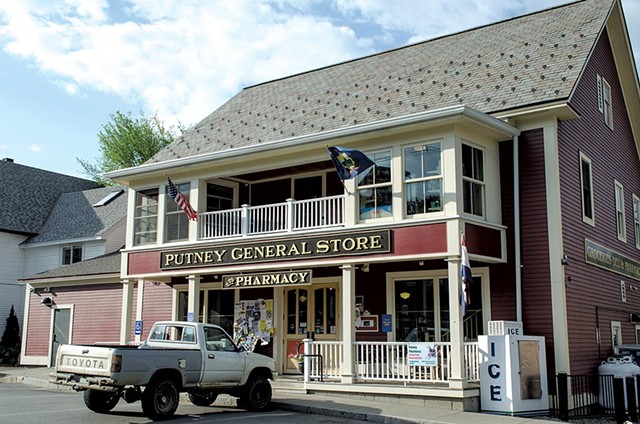 I grew up in Boston, which has its share of delis and lobster shacks, but nothing is as emblematic of local culture as a Vermont general store. The term is used interchangeably with "country store" and reflects the specialties of a state as much as the needs of a town, offering daily conveniences at a range of price points. At Dan and Whit's General Store in Norwich, the confident motto is, "If we don't have it, you don't need it."

Yet for nonnative Vermonters like me, a common tendency is to picture a general store as offering fudge, flannel nightgowns and novelty drinks such as switchel and sarsaparilla: a nostalgic nod to a time past rather than an everyday purveyor of local needs. As Kate Bolick stated in a 2013 New York Times article about the Vermont Country Store in Weston, just browsing the store's catalog is "a trip down memory lane so masterfully paved, I don't even care whose memories I'm remembering."

To an outsider, the general store is as integral to the romantic vision of Vermont as leaf peeping, maple syrup and green mountains. But these institutions aren't simply relics of the past. Like any lasting business, they must evolve to endure, defined by their role as a central feature of community life.

I wondered about that evolution, which led me to a question about not the past but the present: What does a Vermont general store look like in 2016?

To find an answer, I decided to embark on a statewide, summerlong tour of general stores that will be chronicled here in monthly installments. I soon realized I'd have many stops to choose from. Writer/composer Dennis Báthory-Kitsz notes the state's density of general stores in his 2008 book Country Stores of Vermont: A History and Guide, where he says about 300 country stores still operate across Vermont's 261-mile reach from the Canadian border to Massachusetts.

Before setting out on my general-store road trip, I needed to find a Vermonter with expertise on the subject. So I contacted Paul Bruhn, executive director of the Preservation Trust of Vermont for the past 36 years. As a specialist in community-supported enterprises, he would have good insights, I figured. This was an understatement. Bruhn was able to list his first 15 general-store recommendations from memory, along with addresses, specialty items, owners, histories, preferred spots to sit for a sandwich, favored bottles of wine and a couple of personal phone numbers.

"General stores are like dairy farms," said Bruhn. "Both jobs are seven days per week, with over-eight-hour days. They're establishments contributing to community well-being. They maintain iconic roles in Vermont society. Both compete with big chains, as well, but that doesn't mean these jobs can't work."

And, just as a small dairy farm might initially evoke nostalgia in a Boston native who didn't grow up with local milk at the gas station, general stores are only nostalgia items to the degree that they want to be.

"General stores are the place for folks to connect with each other and their town," Bruhn continued, "and this includes all sectors of the population. People with resources and people without them. Newcomers and fourth-generationers."

As a social hub, the general store plays a neighborhood role in a way department and grocery stores cannot. "When a store is lost, you lose that sense of communal identity," Bruhn said. "Your town just becomes a rural subdivision."

This brings me to my first tour stop. On the first 80-degree day in May, I drove down Route 100 from Middlebury, my Vermont home since last September, heading for the Putney General Store and Pharmacy. It's a store so vital to its town that Putney's inhabitants wouldn't let it disappear.

At 10 p.m. on May 3, 2008, the Putney General Store was enveloped in flames. Although the blaze was "not suspicious," according to Putney fire chief Tom Goddard, its cause remained mysterious — perhaps old wiring in the building, the store's website noted. The façade was damaged and the interior gutted, but the general store was not destroyed. It would, however, require a significant amount of cash to reconstruct. And the price of rehabilitating the store exceeded the storekeeper's insurance payout.

"Because the Putney General Store was a general store, it was the center of community life," said Bruhn. "This is typical for any number of general stores around the state. The Putney Historical Society recognized [the store's importance] and decided to take on the project of ownership."

With the historical society behind it, the Putney General Store was ready to be salvaged. Then came another roadblock: Stabilizing the store's foundation called for about $500,000. "Funding was complicated," explained Lyssa Papazian, treasurer of the PHS and a board member for nearly two decades. With the help of grants from the Vermont Housing & Conservation Board, the Vermont Community Development Program and "tons of community donations ... we got the money to rebuild," she said.

Soon, the Putney community watched as reconstruction began on its general store. Within a year, the façade of the newly built store was almost complete. But then, on November 1, 2009, an arsonist struck. The Putney General Store burned again, this time nearly to its foundation.

Then "there was a town hearing that would decide, What next?" Bruhn recalled. "Before the hearing started, a crowd of over 50 people had already gathered. Folks were devastated." But the townspeople concluded that an arsonist would not define the town of Putney. Money would be raised, once more, to rebuild. This time, thanks to good insurance, Papazian said, the monetary loss wasn't devastating. A few grants pulled out. Many stayed.

"It was really the community effort that got it all back together," said Jim Heal, current owner of the Putney General Store. In a recent phone call, Papazian reinforced Heal's comment: "The project had over 400 individual community donors. Not bad for a population of about 3,000 people."

When I visited the Putney General Store, I found a young couple lounging in two deep-seated chairs on the front porch, chatting over sandwiches before running inside for a six-pack of beer. A man worked on his coffee and pastry at a wrought-iron table beside them. Inside, the store hummed with friendly conversation about a daughter's dance recital and how much ketchup to buy for a barbecue. People mingled over lattes near the espresso bar and browsed cuts of beef at the deli counter.

"Did you know that, in Vermont, this is the oldest general store that's been a general store the whole time it's existed?" said barista manager Mijkl Blue. He was ringing me up for a raspberry turnover made in-house by cashier and part-time baker Tabitha Celani.

The doors of Putney's "general merchandising store" opened in 1796, and the space remained in operation until the fires forced its temporary closure. By December 2011, the year of its 215th birthday, the Putney General Store had reopened to the community. Although the PHS maintained real estate ownership of the building, local pharmacist Heal became the store's owner in May 2013.

Updates in the store's 220 years of service include a full coffee bar, a prepared-foods deli and the aforementioned pharmacy on the building's second level. "Here, you can get all your needs met in one place," Blue said. "Deli, meat market, beer, coffee, pharmacy, groceries" — both local and commercial brands — "and social, especially."

I asked Blue what he meant by "social needs."

"[The Putney General Store] is definitely a community center," he answered. "Many people come in just to socialize. You may be grumpy when you come in, but not when you leave."

Blue cited more examples of this communal sentiment. Locals can borrow coffee pots from the espresso bar when they need them for fundraisers or parties. The store hosts special events each year — such as Breakfast With Santa, when Heal bedecks himself in the archetypal red suit and white beard to serve breakfast to the Putney community. Recently, Heal hired a local cook named Jason Newton to make themed nightly suppers like Fish Fry Fridays and Thursday Burger Nights. They also hired a baker to meet gluten-free dietary requests.

It's easy to see why the store that twice nearly burnt to the ground was twice worth rallying around. Daily conveniences — everything from good coffee to dental floss to Doritos to farm eggs — are only the beginning. The Putney General Store, like many general stores across the state, draws great value from being a vital social institution.

I began my tour to seek the narratives behind general stores like Putney's. So far on my trip, I've found the most extensive wine selection in Rutland County. I've encountered a beverage cooler filled with Mexican Coca-Cola, and a 16-ounce can of B&M Brown Bread with Raisins. I've backtracked, already, to the Dorset Union Store, where co-owner Cindy Loudenslager made me an ice cream sundae stacked with vanilla soft serve and homemade ginger-molasses cookies. Behind these finds are the histories, and people, that stitch a town together.

What does a Vermont general store look like in 2016? The answer is in the stories, pictures and products gathered along the way.