How the Burlington Telecom 'Debacle' Divided a City Council 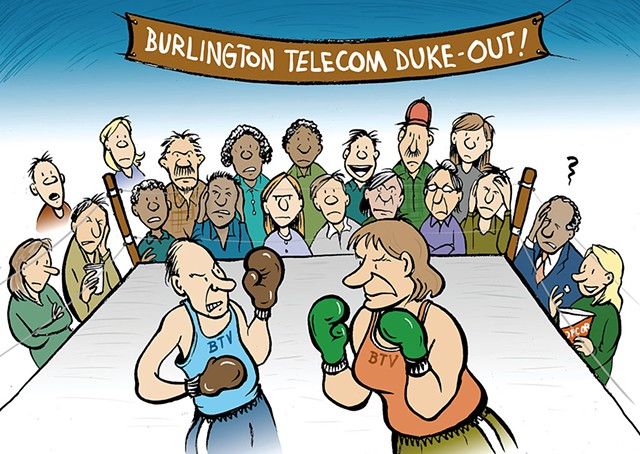 Five hours into the Burlington City Council's November 27 meeting, Councilor Dave Hartnett (D-North District) decided to take matters into his own hands. His colleagues were trying for the third time to select a buyer for Burlington Telecom, and, in Hartnett's view, they were once again headed for a deadlock.

So, just before 11 p.m., he climbed the stairs to the City Hall Auditorium balcony to hash out a deal with one of the bidders.

"You guys aren't winning," Hartnett recalled telling ZRF Partners founder Faisal Nisar and Schurz Communications president and CEO Todd Schurz, who had put together a joint-venture bid. "I don't support your proposal." He suggested that Nisar and Schurz restructure the bid — that Schurz take the lead role and Nisar step back and fund the venture.

The result? A new, 11th-hour $30.8 million offer. Some councilors, such as Max Tracy (P-Ward 2), strongly objected to the backroom deal. He called the last-minute development a "slap in the face to the public process."

Nonetheless, it won approval from a majority of Burlington city councilors. At 1:45 a.m., they voted 8-2 for Schurz and ZRF. By then, the group had rejected the highest bidder — Toronto-based Tucows offered $32.3 million — and the lowest, which had the most vocal supporters: the cooperative Keep BT Local.

To maximize profit, the city had to sell Burlington Telecom by the end of December as part of its 2014 legal settlement with creditor Citibank. The six-month process of vetting potential buyers was supposed to be orderly and transparent, but conflicts of interest and changing timelines, bidders and offers made it anything but. The deadline vote came after an eight-hour meeting marked by sharp disagreements, profane outbursts and Twitter battles. Because of the outcome, Councilor Ali Dieng (D/P-Ward 7) later vowed he'd work to unseat some of his colleagues on Town Meeting Day.

It was a "process of compromise," she said. "That is what legislative bodies do when they're working well. At the end of the day, I honestly think we got a great bid."

How did the search for a new owner of Burlington Telecom turn the rule-bound city council into a reality show?

Eight bids for BT came in by the June 5 deadline. An advisory board selected the final four — ZRF, Schurz, Tucows and KBTL — to advance to the full council in July.

Knodell decided to make the once-confidential offers public in September and called it a "big win for transparency."

But then three, not four, bids were released. Nisar's ZRF had withdrawn its offer after Mayor Miro Weinberger expressed his concerns about a potential conflict of interest in the relationship between Nisar and BT adviser Terry Dorman, the latter of whom was considering staying involved with BT after the sale. The two have known each other, and served on some of the same boards, for more than a decade.

Then, in October, the council delayed what was supposed to be its final vote because Councilor Karen Paul (D-Ward 6) announced that she had a professional conflict of interest. Paul subsequently quit her job and did vote, though the nature of the conflict has still not been revealed. (The city turned down Seven Days' request for related public documents, and the newspaper is suing to obtain them.)

The second time the council tried to finish the job, members were split 6-6 between Tucows and KBTL. Because the 12-member council has no tie-breaking measure, it asked the two competing bidders to team up and present a joint proposal. If they couldn't agree on one, the council decided, Schurz and ZRF could reenter the process. Dorman resolved any potential conflict by announcing that he would have no future involvement in the telecom, according to Hartnett and Weinberger.

A week later, the council passed a resolution stating that "no individual city councilor shall be in contact with any bidder individually for the remainder of this process."

If that measure was intended to rein in councilors, it failed. Last week's meeting was even more contentious than the preceding ones.

The council had already taken two hourlong recesses by 11 p.m., when public deliberations on BT finally started. The long delay gave the audience plenty of time to tweet about the growing chaos. They called it a "travesty," a "farce" and a "show de merde" — a shit show.

"Bullshit!" Hartnett yelled over her. "You're out of control, Councilor Shannon, and you're going down the wrong path!" When she persisted, he jabbed a finger at her and declared her interrogation "boring."

Wright and Knodell jumped in to defend themselves. Speaking for the two of them, Wright denied that he had acted improperly and later asserted that Dorman had approved the November 26 sit-down at the Hilton Garden Inn.

Dorman did approve a November 22 meeting of Nisar, Knodell and Wright in the airport, the BT adviser said later. Dorman told Seven Days he further attempted to facilitate the meeting that occurred on the 26th, but learned Todd Schurz was unavailable. He gave Nisar's cell phone number to Wright "mistakenly thinking that the meeting (which I had okayed but could not schedule) was being substituted by a call," he said in an email.

Co-op supporters alleged that Tucows backers were "Miro-bots" who will do whatever Weinberger wants.

With time running out and options seemingly exhausted, many councilors were willing to resign themselves to the ad hoc Schurz-ZRF proposal. Schurz is a private family-owned company from Indiana that operates fiber, cable and media companies across the country. ZRF will fund job training and provide startup capital for local tech companies.

"We couldn't postpone any more," said Adam Roof (I-Ward 8), a Tucows supporter who nonetheless voted in favor of the final Schurz-ZRF proposal. "It was an improper ending," Roof said. "But it was a fitting ending to an improper process."

Hartnett acknowledged that he ignored the council resolution from two weeks prior by approaching Nisar and Schurz at the meeting but said he had no regrets. "I'm OK with giving up transparency for a better offer," he said during a recess at the meeting.

Besides, he told Seven Days later, "Everyone had their hand in the cookie jar going to bidders independently."

Those councilors who violated the resolution by meeting in secret won't face any consequences, Blackwood told Seven Days. "The people's remedy is to unelect them," she said.

"No apology from me for Councilor Shannon — at all," he said.

In fact, Hartnett asked for Shannon's apology. He was enraged, he said, "to sit there and have another city councilor attack the integrity of other councilors and virtually just flat-out lie on the floor. She should consider maybe even stepping down from the council."

Shannon said it "pained" her to hear of Hartnett's continued criticism. "We had a good relationship prior to Monday," she said. "I do believe time heals all wounds, but how much time, I don't know."

In a phone interview last week, Dieng, who voted against Schurz, said the meeting was "like kindergarten." He took the next day off work. "I was totally sick from the inside," he said.

He said he'd be helping to unseat those current councilors who are motivated by "their own agenda. It's really time; other people should run for office." Dieng said he is especially peeved with Knodell, Wright and Hartnett, but only Wright is up for reelection in March. Dieng also suggested that Paul should step down from the council for her alleged conflict of interest.

Groups are mobilizing, too, as a result of the BT decision. KBTL board chair Alan Matson said last week he was taking "a day to mourn" but would be meeting with members soon to decide next steps. They would consider using their groundswell of support — including 500 contributing members — to stay involved with BT or to back council candidates in March, he said.

Rights & Democracy is gearing up to campaign for and endorse progressive candidates and will be discussing BT and devising a strategy, according to spokesman Shay Totten, a former Seven Days columnist who supported KBTL.

"There's a backlash that's going to come out of that that's a little more vicious," Totten predicted. "People have been very energized," he said, and are "seeing this as part of a broader picture that the city is sliding backward."

Tom Torti, president of the Lake Champlain Regional Chamber of Commerce, worried that the "debacle" would make Burlington look bad in the eyes of tech companies searching for a place to land. Such companies seek transparency, consistency and predictability, he said: "They're going to look at that and say, 'Huh?'"

Plenty of questions remain about the winning bid. Schurz charges its consumers more than BT, according to Shannon, but it promised not to raise prices in Burlington for at least five years.

The company also submitted a letter to the Federal Communications Commission to advocate against net neutrality — the current practice that prevents internet service providers from favoring some online content. But CEO Schurz promised that BT would stay net neutral. "The commitment we gave to the city we will absolutely keep," he said.

Weinberger, who backed Tucows, said he was relieved the council finally acted. Of Schurz, he said, "We'll work to hold them to a higher standard than sometimes they've achieved in other markets."

He said he would help Schurz and ZRF establish a formal agreement, which is scheduled for council approval on December 18. By Tuesday, the contract was not yet formalized.

Meanwhile, CEO Schurz said he would spend the next several months reaching out to the community, trying to win the hearts of Burlingtonians. A few days after the marathon meeting, he confessed, "We, too, were surprised by what happened on Monday."

Clarification: This story was updated at 4 p.m. on December 6, 2017, to include Dorman's statement about trying to set up a meeting for Wright on November 26.