How My Son Became My Running Coach 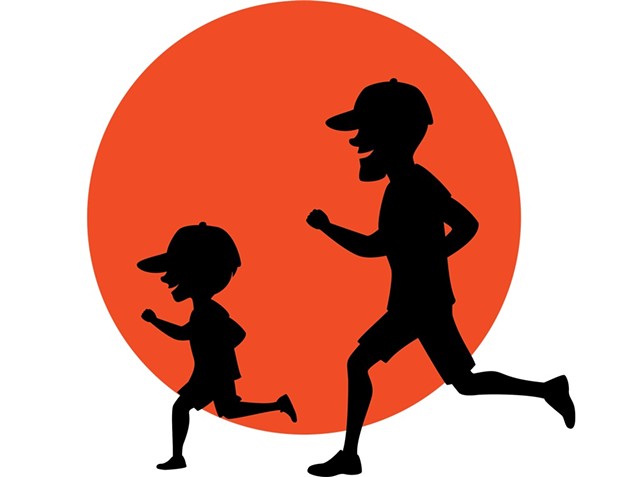 "Come on, Dad! Really push yourself for this last stretch! Bring it in! All the way home!"

I stumbled toward my pint-size coach, gasping down the bike path in my best approximation of a jog, wondering in that moment why I had not only agreed to this but suggested it. Aside from a few flirtations with running in my twenties, I've never been a runner. In fact, I don't think I had ever run more than two miles at a time in my life.

But here I was, at 42 years old, under the tutelage of my 11-year-old son Hayden, training for a hypothetical 5K. We'd agreed to start small. Day one, we would run a mile. The next day we would tack on a 1/4 or 1/2 mile, adding a little more each day until we hit our 3.1-mile goal. In my young coach, I had someone who would help me set goals, encourage me and hold me accountable. I needed to be held accountable.

The seed for this project was planted when Hayden was in kindergarten. As part of a school program, he would show up early and run laps around the playground. Every time he completed one, he was handed a popsicle stick. Once students had enough sticks, they could cash them in for stickers or bouncy balls or erasers or whatever the hot elementary school prizes of the year were. He amassed a lot of popsicle sticks and, in the process, discovered that he had a real affinity for running.

As he got older, we found more opportunities for Hayden to run. Parks and rec track-and-field program in the summer? Check. An uncle burning off his Christmas cookies and cabernet on December 26th at my parents' house? Lace 'em up, kid. Local 5K raising money for a cause that his parents somehow got wind of? Sign him up — and see if we can guilt the grandparents into a nominal contribution to boot.

At those 5Ks, my wife and I would pull up, decked out in jeans and flannel, letting him loose in a sea of spandex and sweatbands. Near the starting line, runners would splay out, massaging their calf muscles with what looked like giant foam rolling pins, going through stretching routines that reminded me of elementary school gym class, and mumbling pre-race mantras while staring out into the distance. Tables with trays full of bagels and giant bowls of granola bars, and medals for everything from finishing to winning, awaited runners at the finish line. Once the race started, my wife and I would drift into the corner, trying to look inconspicuous in our street clothes while we waited the 25 to 30 minutes it took Hayden to finish. These were his people, not ours, but we were thrilled that he was finding his own tribe, growing away from us in all the right ways.

Pretty soon, he was running on relay teams in the Vermont City Marathon. The first year, Hayden ran a 6-mile stretch, and the next, at 11 years old, he ran a half marathon. I was simultaneously proud and flummoxed. And my son's accumulating achievements got me to start thinking about taking up the pastime myself.

While my earlier attempts at running were thwarted by a bad ankle and what I'm pretty sure was medically diagnosed as a "bum foot," surgery in the intervening years had taken care of frequent sprains and impact injuries. My old excuse that my body just wasn't built for running was becoming harder to justify. And while it was easy to chalk up my son's seemingly effortless 5Ks as a preternatural gift, watching him add mile after mile to his training every week was inspiring.

Picking up Hayden from his weekly pre-marathon training sessions, sweaty, exhausted and beaming with pride, I began wondering: Even if I didn't have a half marathon in me, surely I could run a 5K with my son, right? And if I could convince him to be the one to get me there, it could be a healthy shift in the dynamics of our relationship. Under my tutelage, he's learned some important life skills: how to fix a bike flat, make a mean breakfast sandwich and identify all of the Grateful Dead's keyboard players. What, I wondered, could I learn to do under his?

And so, we began training: Hayden running next to me, talking the whole time as if we were on a leisurely stroll; me gasping for air, never responding, taking it all in — every word of encouragement, every endless tangent about Fortnite, every question about how I was feeling. He would jog right next to me, reigning in his pace for most of the run, then sprint off ahead so that he could clap me in for that last 200 feet or so. As I stumbled over the invisible finish line at the end of every run, he would tell me that he knew what I was doing wasn't easy, but he believed in me, he was proud of me, and he loved me.

Eventually, without even realizing it, we hit the 3.1-mile mark. There was no big celebration, not even a photograph of the two of us afterward. That first 5K, however, wasn't my last. I've kept it up, running almost every day. I still don't love it. I don't know if I ever will. But I trust science, and so I run for my physical and mental health. More importantly, however, I run to remind myself that, as much as I try to shepherd Hayden through life as best I can, he has just as much, if not more, to teach me about how to live.

I still don't really have any interest in running a half marathon, but I'll sometimes run five, six or even 10 miles when I have the time and the inclination. And when I feel doubt creeping in, it's quickly erased by that small voice in my head telling me that he believes in me, he's proud of me, and he loves me. So I push myself. And I bring it in, all the way home.