How Local Performing Arts Venues Are Reacting to COVID-19 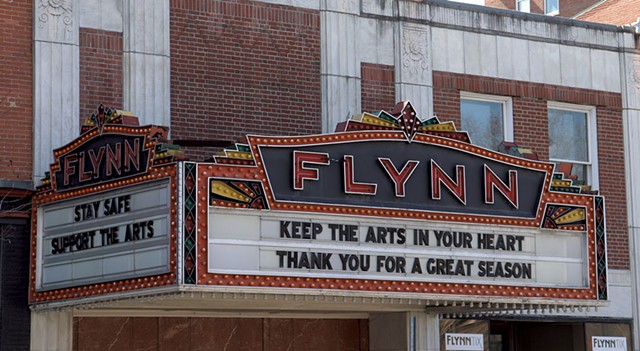 Call it "Black Friday." On Friday, March 13 — yeah, we know, right? — performing arts venues of all shapes and sizes across Vermont began responding to the threat of the novel coronavirus pandemic by announcing postponements, cancellations and, in some cases, complete closures. By Monday morning, it was easier to make a list of theaters and performance halls that still had events on their calendars than of those that didn't. By Tuesday, practically every concert, play, dance recital, comedy night and puppet show in the state had been canceled or postponed.

What might have been seen — to quote countless press releases and sound bites — as "an abundance of caution" only a week ago became this week an ethical imperative. Experts worldwide advised that "flattening the curve" of the virus meant stopping all gatherings en masse, stat. That left people who operate gathering spaces confronted with a profound and difficult obligation.

"It would be utterly irresponsible at this moment to keep pushing forward and have people gathering," said Steve MacQueen, artistic director of the Flynn in Burlington. On Friday, the largest nonprofit performing arts organization in Vermont canceled all performances and classes through May 31, effectively ending its current season.

If performing arts venues had essentially no choice but to close, that didn't make the decision any easier.

"It's pretty clear that the impact of this is going to be potentially devastating on the arts organizations and the creative sector," said Karen Mittelman, executive director of the Vermont Arts Council.

"I think it will be grave," MacQueen said. "Nothing positive is gonna come out of no shows from a place that does shows."

MacQueen noted that the Flynn is "fairly well positioned" to weather an extended closure.

"We're well established; we don't really live show-to-show, per se, like a lot of arts organizations do," he said. But the Flynn will experience serious financial fallout from the cancellations. "Everybody is," MacQueen said. "Only Netflix will benefit from this. Netflix and delivery food."

While larger organizations might be comparatively insulated from the consequences of a temporary shutdown, those that do "live show-to-show" are in a more precarious position.

"It is absolutely crippling," said Laura Roald, executive director of the Off Center for the Dramatic Arts. The tiny alternative theater in Burlington's Old North End, which seats just 49 people, canceled its programming through the end of March.

"We function as a community center and as a place for artists — usually low-income artists or students or emerging artists — to be able to present work," Roald said. "We operate on a less-than-shoestring budget to make that happen."

Roald explained that Off Center operates through an all-volunteer artists' coalition and has no cash reserves, corporate sponsorship or access to operational funding.

"Without those resources at our disposal, there are a lot of question marks," she said.

Those uncertainties made the decision to close even more complicated for Off Center, which effectively partners with the artists who rent its space.

"It was a question of talking to the artists and seeing how they felt about it," Roald said. "But the responsible choice, I believe, is to make sure that our artists and audiences are safe."

She added that numerous volunteers at Off Center, as well as those who attend and work on shows there, are in the high-risk groups for developing severe symptoms from COVID-19. "And we would never want to do anything to jeopardize them," Roald said. 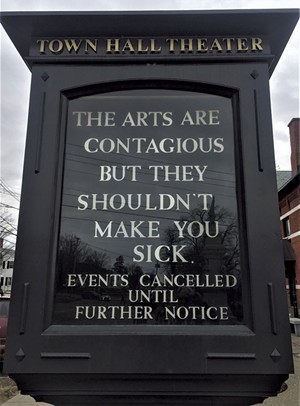 While most Vermont venues began announcing cancellations on Friday, Town Hall Theater in Middlebury made the call to halt its programming (through April 30) a day earlier. Luckily, said general manager Lisa Mitchell, Town Hall Theater has so far been able to postpone, rather than cancel, most of its shows.

"We've had a lot of luck rescheduling," she said, adding that many shows have been moved to late May or the fall. Even so, Mitchell expects the financial strain to be significant.

"We really rely on ticket sales to bring in revenue," she said. "But it's also a really difficult time to go out and fundraise, because everyone is hurting, and also the market is terrible. So we're weighing our options and trying to figure out what the best approach is."

Financial peril is perhaps even more severe for artists than for performing arts organizations, noted Mary Lou Aleskie, executive director of the Hopkins Center for the Arts at Dartmouth College in Hanover, N.H. Like the Flynn, the Hop has canceled or postponed the remainder of its season.

"The challenge is actually for the artists, and especially artists who are strictly freelance, whose tours are cratering, who are relying on this income," Aleskie said. Complicating the cash-flow issue is that most artists don't get paid until the day of the show, but they may have been investing money in developing a production for six months.

"They really need that money on the back end," Aleskie said. "So we're trying to figure out [how to help] artists remain whole in this process."

Mittelman advised those who can to seek out and support artists in virtual spaces.

"For people who are feeling deprived of the arts thanks to COVID-19, you can go online and see there are Facebook live events, live-stream concerts, online film-watching parties," she said.

Indeed, individual artists and organizations around the region are exploring the use of live streaming to deliver performing arts to homebound fans. The Flynn's leadership, MacQueen noted, has been in discussion with artist-in-residence Daniel Bernard Roumain, local contemporary ensemble TURNmusic and others about alternative programming. Town Hall Theater is engaged in similar discussions with its artists.

At the Off Center, Roald said she's working on "low-cost" online alternatives for programming. She also noted that she's keeping the space open to artists for rehearsals "basically for free," provided users abide by strict sanitation protocols.

The Hop plans to capitalize on the success of streaming one of its most popular events, the talent show "Dartmouth Idol." The finals of that event were held in early March, just when concern about the coronavirus emerged in the U.S.

"We encouraged people, if they weren't feeling well, to stay home," Aleskie said. About 300 people turned in their tickets, and 900 watched online, she noted.

"That was a good test case for us," Aleskie continued, that has encouraged the Hop staff to see streaming as a viable option. She said the venue will stream excerpts of past performances, as well as "salon-style" performances by Dartmouth ensembles, most of which are led by working artists, not academic faculty. The college closed its campus last week.

For events scheduled beyond the announced cancellations, most presenters are taking a wait-and-see approach. In mid-April, MacQueen and the rest of the Flynn leadership — including interim executive director Charlie Smith, who came on board in late January — will evaluate the fate of the Burlington Discover Jazz Festival, which is currently scheduled for early June.

"I can certainly see a world where you can't have big gatherings in June," MacQueen said. He added that one option would be to postpone the 10-day festival until the fall, rather than cancel it.

"Doing away with it causes some real financial damage," he explained, calling the festival "a little more fragile than the Flynn proper." Losing a full year "is dicey."

As for how patrons can support arts organizations, all of Seven Days' interviewees echoed similar themes. Ticket holders for canceled shows can consider donating refunds to the venue or taking a credit rather than cashing out. Those who can might donate money outright.

That's what Cristina Alicea, producing artistic director of Vermont Stage, suggested in an announcement of the company's cancellations: the last week of Marie and Rosetta, the entire run of The Pitmen Painters, and two Youth Company productions. Similarly, in White River Junction, Northern Stage suspended all of its programming through May 3.

"Arts organizations across Vermont are scrambling right now to respond," Mittelman said, "to just keep the doors open for their own staff and to provide basic operating support."

Roald made a different sort of plea, alongside urging financial donations.

"If anyone's got some hand sanitizer, we'd love some," she said with a chuckle. "We'll take cleaning products, too."

As the ramifications of closures become clearer in the coming weeks and months, local artists and arts organizations will do what they do best: get creative. And they'll have to.

"You know, it's my first bout with the end times," MacQueen said. "I've never done this before."

Whatever happens, he believes recovery will take a broad and inclusive effort.

"Even though we're socially distancing, [that] doesn't mean we're not part of this community," MacQueen said, "and we've gotta do what we can to help everybody out."