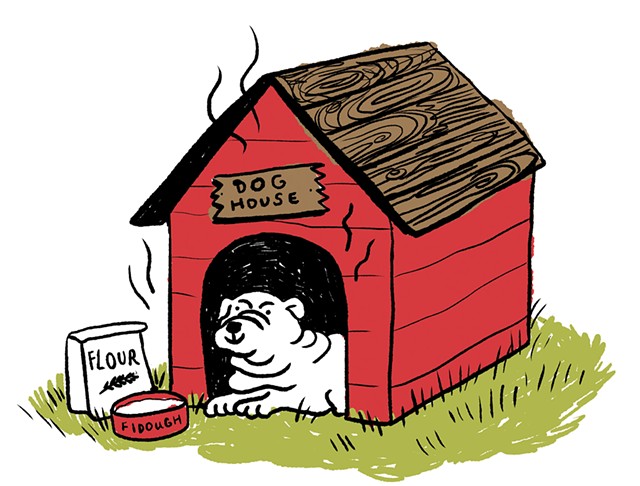 A year ago, in mid-March 2020, when we were all staying at home for two weeks to flatten the curve, I jumped on the sourdough bandwagon. Despite regular experiments with no-knead loaves, quick breads and other floury delights (and hosting two seasons of a podcast about bread), I'd never actually kept a sourdough starter of my own. But boredom led to baking, so I stopped loafing around.

At the same time, I was wrapped up in another popular early pandemic pastime: really, really wanting a dog. I spent hours searching online for a hypoallergenic rescue pup, to no avail. Apparently I wasn't the only one who had that idea, or whose partner had dog allergies.

Since I couldn't have a canine companion, I channeled those caregiving urges into a mixture of flour, water and ambient yeast, bacteria and other microflora — and Fidough was born.

Barring the requirement of regular walks, caring for a starter is similar to owning a dog: Feed it on a strict schedule, clean up after its accidents, and don't worry if it's a little stinky. The instructions I followed even likened the daily feeding process — giving it flour and water — to "training." Sit. Stay. Good Fidough.

Those instructions came from Chad Robertson's book Tartine Bread, named for the San Francisco bakery synonymous with sourdough. Robertson's training process seemed relatively straightforward for a novice pet owner, despite requiring five pounds of flour, which was hard to come by at the time.

I filled a small glass bowl halfway with lukewarm water, added fistfuls of all-purpose flour and plunged in my hands to mix until I had a gloppy, thick batter. I covered the bowl with a cloth and put it on a cool, dark shelf. Easy.

Over the next few days, bubbles dotted the top and sides of the mixture, right on time. I was optimistic.

But on day four, peeling back the dark crust that had formed on top of Fidough filled my kitchen with a smell that was more "poop bag" than the romanticized "aroma of fermentation" the instructions promised. I started to wish I could tie Fidough up outside.

Good pet owners put up with the smells and the cleaning for the rewards of the relationship. But as I progressed to daily feedings and then to my first loaves, Fidough and I were not bonding. I had only managed to train it to play dead.

As friends and coworkers shared photos of their airy, crusty bread and perfect discard crackers, I hid the fact that I was baking up one failure after another. Each Frisbee-like loaf frustrated me more.

I began to neglect Fidough, skipping feedings and eventually crating it in the fridge. Finally, in a shame-filled fit — and without ever baking a successful loaf — I threw it in the compost.

In the year since I murdered Fidough, I've stuck to baking no-knead bread with reliable commercial yeast — and to watching videos of other people's dogs online. I'll leave the sourdough up to our talented local bakers, and if I ever get a dog, I'll hire a professional trainer.

The original print version of this article was headlined "RIP, Fidough | How I murdered my sourdough starter and realized I wasn't ready for dog ownership"