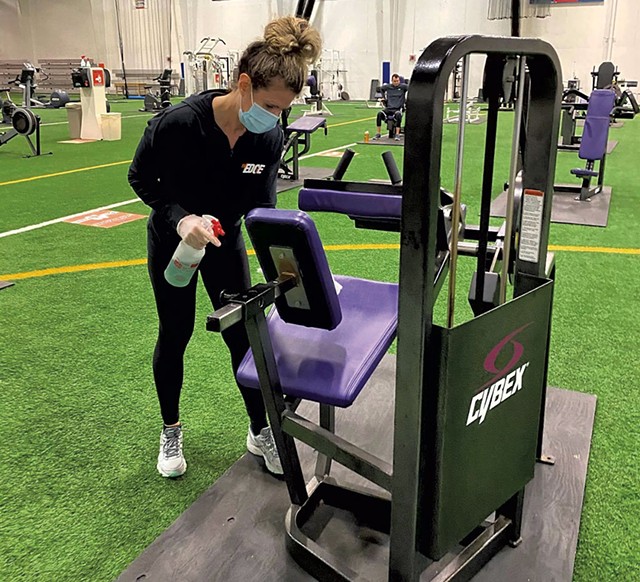 For many of us, the dawn of a new year is a time to clean up our acts. Temporary teetotalers drive their friends to drink, preaching the gospel of a "dry January." Others hop on the latest fad diet or at least try to eat a veggie now and then. And, of course, still others sign up for new health club memberships or optimistically renew the ones they let lapse the previous February.

This year, those legions of would-be workout warriors now returning to the gym or in-person yoga or spin classes are finding a very different fitness environment from that of Januarys past. Let's say they walk into the EDGE Sports & Fitness on Twin Oaks Terrace, one of two EDGE locations in South Burlington.

Before the pandemic, the club's exercise machines and equipment lived in dedicated rooms scattered around the mazelike facility. Most of that equipment has since been moved to the 21,000-square-foot space that once was a trio of tennis courts. Members may feel like they're working out in an airplane hangar.

"You can literally drive a car through it," EDGE president and co-owner Mike Feitelberg said on a recent Thursday afternoon tour of the space.

Indeed, one could probably squeeze a Mazda3 in the spaces between chipper stationary cyclists whizzing through a spin class, grunting bodybuilders pumping iron and lithe folks gliding away calories on elliptical machines.

But for health clubs, such pandemic adaptation comes at a price. You could also drive a car, maybe even a truck, through the holes in the financial ledgers and membership rolls of many area fitness centers.

Last March, the State of Vermont mandated the closure of health clubs; on June 1, it allowed them to reopen with pandemic-era restrictions. Many gyms, yoga studios and other fitness centers did reopen, but at 25 percent capacity, often with restructured facilities and sometimes with expensive upgrades.

"Our goal is not just to meet the state's guidelines, it's to exceed them." Mike Feitelberg tweet this

The largest multiuse health club in Vermont, the EDGE operates five locations in Chittenden County: one in Williston and two each in Essex and South Burlington. In addition to reconfiguring workout areas, the company has upgraded or replaced its HVAC systems, adding hospital-grade MERV-13 HVAC filters. It has converted all of its faucets and dispensers to touchless models, covered high-touch areas in NanoSeptic self-cleaning material, and created a new position, "health ambassador," to aid in cleaning and to remind guests of protocols such as mask wearing and distancing.

Feitelberg put the cost of those measures for each facility at "tens of thousands" of dollars.

"Our goal is not just to meet the state's guidelines," he said, "it's to exceed them."

Feitelberg declined to give specific numbers, but he noted that a "significant number" of EDGE members have put their memberships on pause or canceled them outright since the pandemic began. While daily visits to the EDGE were up 20 percent in January over December, he said, overall membership is still down 30 percent. The company has laid off about 50 employees.

Steve Hare, the owner of Vermont Sun Fitness Centers in Middlebury and Vergennes, reports a similar lull in membership — he's at 750 members, down from a January norm of about 1,100. That kind of drop would impact any business at any time of year. But for the fitness industry in January, it's a critical blow. That's because, Hare explained, the business models of most gyms are built on a first-quarter surge in membership. 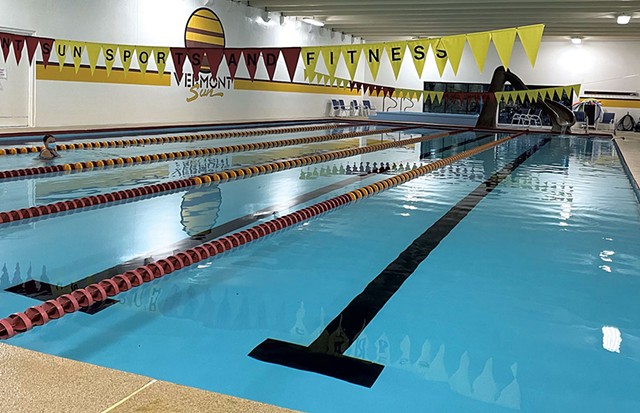 "Any fitness center relies on people who don't come in that often," he said. "It's part of the financial structure."

Hare said that 60 to 70 percent of his business is from people who work out regularly. "Our bottom line relies on the 30 to 35 percent of people who don't," he continued, "and those folks just aren't there this year."

"The first quarter is what sustains us," said Sarah DeGray, owner of REV Indoor Cycling. "In fitness, like restaurants or entertainment, your business model is volume," she added. "So January is the dream month."

But this year, she said, January is more of a nightmare. At the end of the month, DeGray will vacate her cycling studio on Farrell Street in South Burlington, which she hasn't opened for indoor classes since last March.

DeGray is a member of the Restart Vermont fitness task force that advised Gov. Phil Scott on reopening health clubs. She said she was the only member who advocated against reopening for indoor services.

"Indoor cycling is such a cardiovascular activity. There's sweat, there's spit, people breathing heavily," she said. "So I could never wrap my head around the idea that we couldn't go into a bank, but someone could come into my fitness studio, remove their mask and start cycling," DeGray continued, referring to a loophole in the state mandate that allows people to remove their masks "while engaged in vigorous physical exercise."

"It just didn't make sense," she said, adding that she understands and supports fitness center owners who opted to open. 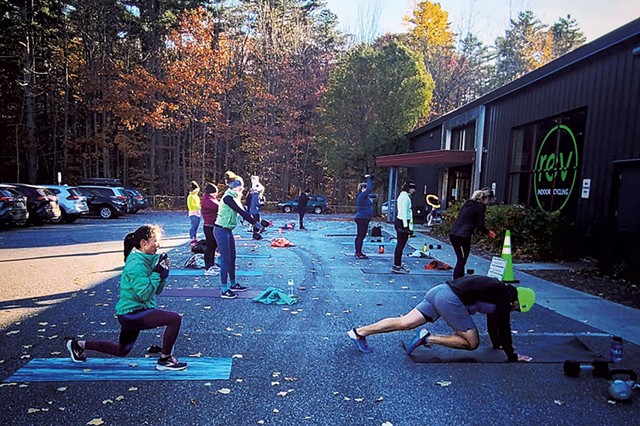 REV hosted a series of outdoor classes over the summer and into November, when the cold arrived, along with a spike in COVID-19 cases. Otherwise, the business has moved online, offering virtual classes and a library of recorded workouts with local trainers.

DeGray said she's had some success with that model, but not enough to offset the loss of her in-person classes. For one thing, she said, "You can't charge as much for a virtual service."

Such services also face corporate national competition: Peloton, Nike, Apple and others offer similar ones, often at a fraction of the cost of buying local. DeGray said she's been forced to offer her classes "for free or at bargain-basement prices just to get people to participate."

"I think a lot of local consumers don't realize that we're competing with these giants," she said. "Think of it like a Church Street shop competing with Amazon."

Marla Thomas is another member of the Restart Vermont fitness task force. She and her husband, Deshawn Thomas, reopened their South Burlington studio, Queen City Yoga & Fitness, on June 1 after pivoting to virtual classes in the early weeks of the pandemic.

"The community needs us, and we can do it safely," Marla said of the decision to open their facility. "Also, how else can we keep our business going?"

While declining to give numbers, the Thomases said the club's membership is down to 2018 levels after several years of growth. They also said the club has been operating at a loss since March, and they've given up their own health insurance.

Like other local clubs, Queen City Yoga, which opened in 2016, has increased its sanitation protocols and requires masks and distancing. It has a hot room that was designed by a mechanical engineer and features a state-of-the-art HVAC system that turns over the air four to six times per hour.

"If it wasn't safe to open, I don't believe the state would have allowed it," Deshawn said.

"And if it wasn't safe, we wouldn't have opened," Marla added. "This is our life. We can't get sick; we can't put our family in harm's way. And that's how we treat our community."

While health clubs offer much-needed outings and help relieve stress during the pandemic, Feitelberg suggested they're uniquely positioned to help the community in a more concrete way: contact tracing.

"We have a remarkable amount of information about each person who comes through our doors," he explained, citing the specs that members are required to give when they join: work and home phone numbers, email addresses, emergency contacts. The club also knows when members check in and out and, based on which equipment they signed up to use, where they were in the building at any given time.

The EDGE has even created its own internal contact-tracing team, each member of which has been certified through a contract-tracing course offered by the Johns Hopkins Bloomberg School of Public Health.

"We've found we are often able to do it faster than the Vermont Department of Health," Feitelberg said.

On March 12, just before the statewide lockdown, the EDGE facility on Eastwood Drive in South Burlington closed after a member who had visited the club tested positive for COVID-19. That case did not lead to further transmissions at the club, according to Feitelberg. While there have been other incidents of members contracting COVID-19, he added, not a single case has been transmitted at any EDGE location.

That's not to say exercising at a health club is without risk. Experts advise caution and common sense even at facilities that are hypervigilant about their COVID-19 protocols.

As Dr. William Schaffner, an infectious disease professor at Vanderbilt University, recently told NPR, "If you walk into a place and see people not wearing masks, turn around and walk out."

While they continue to face the unprecedented challenges of the pandemic, Vermont health club owners see positives, too.

"We were all forced to make changes to how we did things," DeGray said. "And I have a lot of gratitude for being allowed to think differently about the way that I do business."

In Marla Thomas' words, "The silver lining here is that it came to be very obvious how important we are in people's lives and what a strong community we have."