How Do You Express Affection With Your Kids? | Kids VT | Seven Days | Vermont's Independent Voice

How Do You Express Affection With Your Kids?

My parents expressed affection by hugging and sometimes kissing when I was a kid. But when Tatiana was born, we discovered she was very sensitive to touch. We even had to buy her seamless socks that wouldn't rub and bother her feet. So there was caressing — the way you would caress a child's head when it's time to go to sleep — but it was a little different from what I grew up with.

Still, when she was a baby, she would sleep on my chest, and later on we would nap together. As she grew, that began to fall away. When she was in elementary school, she asked if I remembered when she was small and we would fall asleep with me holding her. I think asking was her way of letting me know that it was a good memory for her and something that she missed. It was sweet.

When I was growing up, we knew we were loved and cared for — there wasn't any doubt of that — but my family didn't show a lot of outward affection on a daily basis. Now, though, I'm a huge hugger.

I've always been very affectionate with my kids as a genuine expression of my feelings, but also for their personal development. It's a constant that continues even into their twenties. When Alex graduated high school as salutatorian last year, I practically broke him in half. I think a hug is an awesome thing. It conveys a lot of different emotions, but you also feel embraced, physically and mentally. Nothing feels better than a big ol' hug. 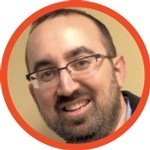 My family were not lip kissers growing up. My mother says, "I reserve kisses for my husband." But my wife's family are lip kissers, and we are with our kids. Every night before our daughters go to sleep, we have a tradition of giving them an "Eskimo kiss" — rubbing noses — and then a big hug.

Our 10-year-old is beginning to decline that physical affection publicly. So when I'm dropping them off at school, I get a kiss from the 9-year-old but just a "Bye, Dad" from the 10-year-old. It's the natural pace of growing up. I'm just glad she still acknowledges I'm in the car.