How Do Kids Benefit From Nature-Based Counseling?

By Christian Dymond and Ken Picard 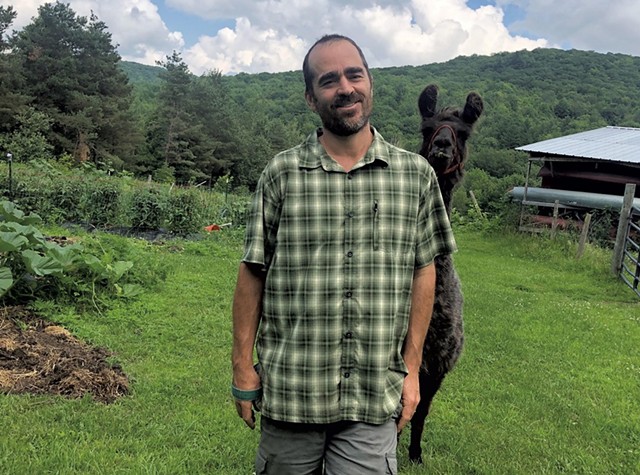 On a steamy July afternoon, licensed marriage and family therapist Christian Dymond splashes through the ankle-deep stream that meanders across his property, not even trying to keep his feet dry. We stop at a large metal culvert that runs beneath a road where many of his young clients like to play. Dymond, who looks to his surroundings for metaphors to apply in his counseling, tells his clients that he calls this spot "the birthing canal," because getting into nature can be a form of renewal.

As we pick our way through fern-covered woods, we are accompanied by two of Dymond's six border collies, who eagerly wait for one of us to toss them a ball. Outside his barn, we watch Trudy, a 10-year-old llama, rolling happily in the dirt.

Forty-two-year-old Dymond runs his practice, Nature-Centered Psychotherapy, from his Milton home, set on a hillside and surrounded by 10 acres of woods, meadows and gardens. He recalls what a professor once told him: "There's no evidence that says therapy has to take place behind four walls."

Dymond treats children and adults of all ages for a variety of issues, including anxiety, depression, anger, and other behavioral and emotional disturbances. He says he can tell almost immediately how much time his clients spend outdoors. Some kids are "super-hikers" who will go outside in any weather and jump on rocks and walk across logs with ease. Others tend to trip over tree roots and get freaked out by insects and small critters. The latter, Dymond says, typically suffer from what author and journalist Richard Louv once dubbed "nature-deficit disorder" — too much time spent on video screens, and not enough time in the natural world.

The son of a Canadian diplomat, Dymond grew up in Ottawa and fell in love with nature at the age of 8 while at summer camp. He attended boarding school at Vermont Academy, in Saxtons River, then earned his undergraduate degree at Johnson State College, before completing his master's degree in marriage and family counseling at Antioch University — New England, in Keene, N.H. He and his wife homeschool their two daughters on the land they've owned since 2003.

Though Dymond does some office-based work, he says that most of his real progress with clients occurs outdoors, where frogs, mushrooms, bees and stinging nettles provide countless opportunities for learning empathy, coping with adversity and being in the moment. Occasionally, a client will see a snake, which may trigger a strong visceral reaction. Dymond says he always tries to capitalize on those unplanned encounters.

Sometimes those events give the client some breathing room after getting too close to an old wound or painful trauma. Dymond recalls the experience of talking to a father and son, the former of whom began opening up about his abusive father. Suddenly a pair of owls began screeching.

"We stopped that conversation and watched the owls talk to each other, and then went back to that hard talk," Dymond recalls. "That conversation is very hard to have in an office."

Though Dymond's task is often to help clients untangle the emotional knots that bind them, it may not seem like work to them. Dymond was once counseling a teen who was living with his grandparents because his parents had been jailed. As the youth later told his grandmother, "I really like spending time with Christian, but he really ought to get himself a job."

KIDS VT: How do you describe what you do?

CHRISTIAN DYMOND: I call my practice Nature-Centered Psychotherapy, but it's hard to put a finger on what I'm doing. It's therapy, but we're doing it while we're doing other activities, like walking by the creek or working in the garden. It all involves animals — walking the llama or my dogs or just being outside. It's very relational. I really try to be a positive force in a person's life.

KVT: How does the process unfold?

CD: First, I assess the parents. Say it's a kid who's acting up in school. I'll work with the parents first, in the office, and I'll help them develop some coping skills. Even in nature-based therapy we're looking at emotions. So how do we help those emotions come out in healthy ways? Because I love nature and believe it's such a powerful, healing force, if kids are on technology too much, we've got to limit it. The kid will often be sitting there, quiet and anxious, and then I'll ask, "OK, do you want to go see the farm?" That's when my job gets fun because we get to go into the woods. And they tell me all the time, "Therapy is so fun." Kids shouldn't have to hate therapy. For some kids, this is the best part of their week.

KVT: What does research say about this approach?

CD: There's tons of research on the benefits of being in nature and natural daylight. But these days, so many kids are indoors and glued to a screen and don't play outside anymore. For kids who are playing a lot of video games, their brain is constantly doing one thing — overemphasizing the prefrontal cortex. But what does the brain do when we're sitting by the creek, listening to moving water, trying to catch a frog? That's when I get interested. So we're getting the benefits of walking outside and breathing and being among the trees and how that balances the brain. And the benefits of being with the dogs and the brain circuitry that grows from that interaction. And the repetitive movements of walking and throwing the ball. Or the calming effect of just sitting up against a tree.

KVT: Are kids more willing to open up if they're not in an office?

CD: I wondered this myself, so I asked a few of my clients what they like about this approach to therapy. They all say it's really nice not to sit face-to-face in an office because that makes them feel intimidated.

KVT: How do you gauge their progress?

CD: It depends on why they're coming to me. One sign of progress is that they look forward to coming. Hopefully we start seeing decreased behavioral issues at school, and kids are talking to their parents and communicating more of their thoughts and feelings. Some kids are so shut down that I'm just giving them a safe place to be. We're letting nature and the dogs do all the work.

KVT: Is there a spiritual component to your work?

CD: I don't call myself religious. I definitely feel a connection with nature, but I don't use spiritual language much... These kids spend so much time with technology, they stop noticing the outside world. So I look at nature as an initiation. If I have a church, it's out here in the woods.