WTF: How Can You Tell When It's Safe to Venture Onto Frozen Lakes? | WTF | Seven Days | Vermont's Independent Voice

WTF: How Can You Tell When It's Safe to Venture Onto Frozen Lakes? 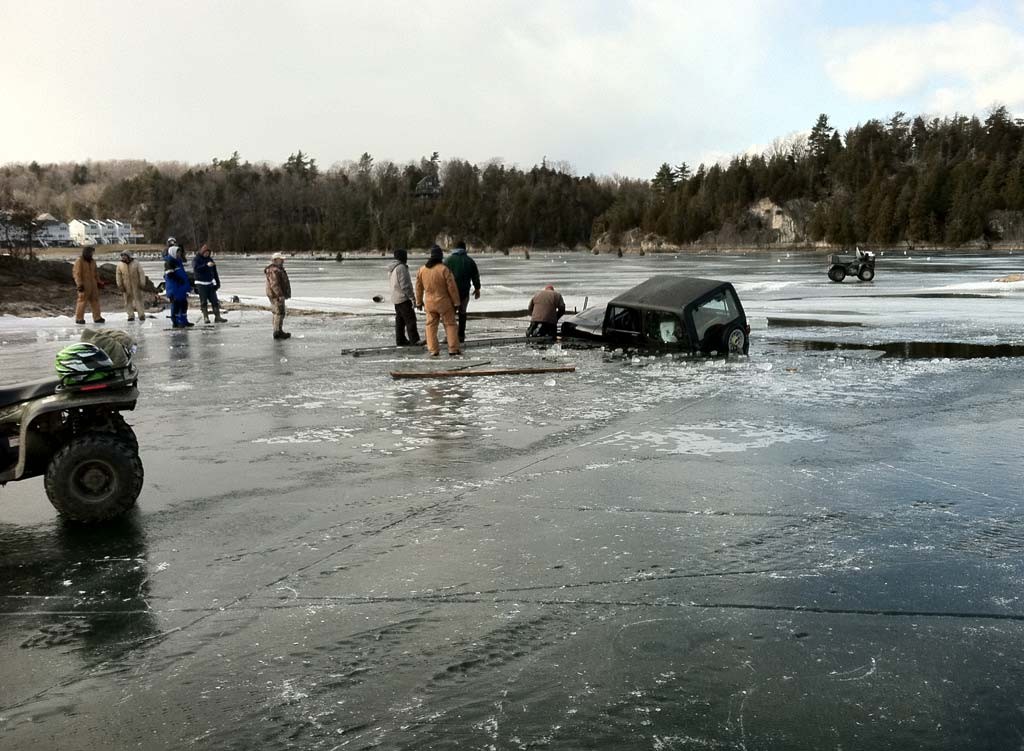 By February, the boat ramp leading to inner Malletts Bay in Colchester becomes a veritable ice road. During frigid winters like this one, when overnight temperatures often hover around zero, the frozen lake bustles with activity. Ice shacks sprout like mushrooms and are soon followed by ATVs, snowmobiles, cars and pickup trucks.

By law, the lake is considered a public thoroughfare when it freezes and is open to motorized traffic all winter. However, unlike Vermont's paved roads, the ice isn't inspected or patrolled to ensure conditions are safe — or closed when they're not. Each year, thousands of people recreate on Vermont's frozen lakes, ponds and rivers. Invariably, a few take an unscheduled polar plunge.

Yet there's no official system for informing the public about the thickness or makeup of the ice. In short, once travelers leave terra firma, they skate, ski, fish, walk or drive at their own risk. So how do you know when it's safe?

According to the U.S. Army Corps of Engineers' Cold Regions Research and Engineering Laboratory in Hanover, N.H., ice needs to be at least two to four inches to support a walker, six to eight inches for an ATV, and eight to 10 inches to hold an average-size vehicle.

"But those are just guidelines," cautions Mike Cannon, commander of Colchester Technical Rescue, a 26-member, all-volunteer search-and-rescue team. "You can have a foot of ice where you're standing and three inches of ice where I'm standing. It's all how it forms, where it forms and what's near it."

This is a busy time of year for Cannon. When a person or vehicle breaks through the ice on Malletts Bay or another nearby body of water, his team is usually the one called to rescue them — or to recover a body. In 1989, the year Colchester Technical Rescue was formed, five people died on Lake Champlain. One was a weather-related plane crash, Cannon recalls. The rest were motorists who drove on thin ice.

One might assume that ice fishermen are the most likely victims. But Cannon says typically it's people "just screwing around" in their cars or trucks, often in late afternoon or early evening. Most don't realize that ice conditions can vary dramatically depending on the air temperature, water depth, topography, time of day and other factors, including underwater hazards.

As of last week, inner Malletts Bay was frozen solid, with about 20 inches of ice reported by one game warden. That makes about 90 percent of it safe for travel, Cannon says. Nevertheless, he offers some guidelines for minimizing the likelihood of taking a midwinter swim.

The safest ice is called "clear black," he says, or ice that freezes slowly and doesn't allow oxygen to get trapped inside. Ice that repeatedly thaws and refreezes has a white, milky appearance and is less dense. Ice buried beneath several inches of snow is more unstable, as the snow can insulate and trap heat.

Ice that forms on still bodies of water, such as bays and ponds, is generally safer than ice on windy or moving water, such as rivers and lake areas near runoffs or tributaries. Equally sketchy are shallows and wetlands, which harbor plant life that raises the water temperature. Rocks, moorings and other protruding objects can act as heat sinks, Cannon says, making the surrounding ice less stable. Areas near marinas are also more dangerous, as many have bubbler systems to keep the water from freezing.

The most dangerous spots are pressure cracks, which form as the ice expands and contracts. They can cause the ice to dip or break as a person or vehicle approaches.

"The majority of the fatalities we get on Lake Champlain are vehicles or snow machines driving across them," Cannon says. "These pressure cracks are the killers."

What should people bring with them if they venture onto the ice? Cannon recommends carrying ice picks, attached to a cord worn around your neck, which can be used to claw your way out of the water. In the early 1990s, Cannon rescued a man whose iceboat broke through the ice more than a mile offshore.

"He got out before we got to him, but he was in pretty severe hypothermia. But he had [ice picks] with him," Cannon says. "I don't think he would have survived otherwise."

Should you fall through, Cannon recommends getting at least your torso onto solid ice ASAP by whatever means necessary: kicking, clawing or breaking through thinner ice to reach stronger ice or land. The first five minutes are critical, he says, because you'll quickly lose dexterity as the blood flees your extremities.

"Being immersed for 60 seconds is going to take it out of you," he says. "Once you lose dexterity, you're done."

Once out of the water, Cannon suggests rolling or crawling toward firmer ice, keeping your body as flat as possible to minimize the likelihood of falling through again.

Finally, Cannon notes that while Colchester Technical Rescue will rescue people, vehicles are another story.

Beginning this year, the Department of Environmental Conservation is citing vehicle owners who deep-six their Dodges into public waters; it has issued at least two citations this winter already. Fines range from $300 to $1500. That doesn't include the cost of hiring a diver to salvage your waterlogged iPhone.