How Burlington Actor Dennis McSorley Came Into His Own ... Stories 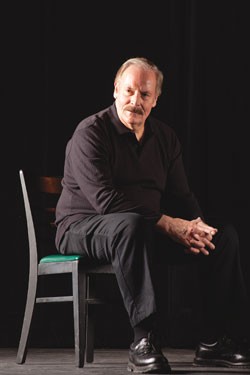 Burlington actor Dennis McSorley has played any number of tough guys in his theatrical career. A pungent Queens accent may have helped him get there, but he delivers the goods onstage. His avuncular, mustachioed physicality suits Everyman parts, as well. But in McSorley’s one-man show, Who Made Me?, which he reprised last weekend at Off Center for the Dramatic Arts, the spotlight shone not just on the actor but the man. That is, the piece he created and performed was autobiographical. And it was sweet, funny, engaging and revealing — up to a point.

If performing a solo show is an act of bravery, Who Made Me? might also be seen as a near-apotheosis for this late-blooming thespian, who moved to Vermont in 1994 “to escape the city,” McSorley said in a postshow interview. And it’s a case study in going for broke regardless of age — he’s 66 — and opportunity. In Burlington’s small theater scene, this erstwhile Irish Catholic schoolboy from New York City has come a long way. A guy with little training in acting (his background: “My mother used to take me to Broadway plays.”), McSorley now lists on his résumé nearly 20 dramatic productions, a smattering of film and TV-commercial roles and a 2006 nomination for Best Actor at the Brighton (UK) Fringe Festival. But in making a one-man show, McSorley takes charge of his own career. It’s both a smart move and a creative challenge.

For this viewer, watching Who Made Me? whetted the appetite for the revelation of other, deeper layers of its subject.

Who Made Me? traces McSorley’s life from birth through formative years in Catholic school through college and the beginning of adulthood and a teaching job. There are heaps of colorful anecdotes along the way — Catholic school alone provides a mother lode — and McSorley elicits both laughs and sympathy as he relates the coming-of-age agonies of the American male. His teens happened in an era when horny boys were rebuffed short of a girl’s “first base.” When the Beatles and Rolling Stones burst into his adolescence, McSorley jokes that his musical allegiances were swayed by “Let’s Spend the Night Together,” not “I Want to Hold Your Hand.”

Later, as he recounts his horror of the Vietnam War and his attempts to obtain conscientious-objector status, McSorley breaks the tension with this update: “Meanwhile, [girlfriend] Kathy and I had gone all the way … in my Roy Rogers bedroom.”

McSorley uses music to convey the period throughout his performance, particularly in the explosive ’60s. But the tunes aren’t on a soundtrack; he sings them. Snippets of “Abraham, Martin and John,” for example, serve to convey the political upheaval and assassinations of the time. McSorley’s singing voice is pleasant but uneven and lacks the Pavlovian power of the originals, so these musical interludes are less effective than they could be. In fact, Who Made Me? suffers ever so slightly from a consistent casualness of tone. McSorley the actor might better draw out the inherent drama in his own story.

But concerns about this, and a brief dip into sentimentality at the end, are minor quibbles with an otherwise well-stitched show. McSorley is a natural storyteller, with a gift of gab, good comedic timing and the ability to connect with his audience. He seems comfortable inside his own skin.

McSorley also has a good memory, he says, which is a boon onstage or off. Since he’s telling his own story, McSorley can decide what to edit out, and he doesn’t have to tell it exactly the same way each time. But this latitude doesn’t mean he’s cavalier about his performance. A show is still a show, and McSorley said he’s honed it, soliciting the advice of such veteran thespians as Paul Schnabel, a founder of Off Center.

“I’ve watched Dennis’ show and gave him some feedback,” Schnabel confirmed. “I’ve also just encouraged the shit out of him, because he’s good. … Dennis has a great improvisational style of delivering a story,” Schnabel added. “It always surprises me how clever and funny he is.”

On Friday night, McSorley performed for scarcely more than a dozen people. When he debuted Who Made Me? last fall, he said after last week’s show, he drew “25 to 30 people each night.” But rather than fretting the small turnout, he appeared humbled for the opportunity to practice his craft. “What’d you think?” he asked a knot of theatergoers who surrounded him after the show.

During the interview in Off Center’s green room, McSorley picked up his story more or less where Who Made Me? left off. His teaching gig in a junior high school launched a 24-year career in NYC public schools, he said. Along the way, he earned a master’s degree in special education and worked with disturbed kids. He married and had a son. Years later, he was divorced.

When he was eligible to retire, McSorley said, he left behind the broken marriage and fled to Vermont, escaping not just the city but personal demons, too. “You can say I’ve been in recovery,” he allowed.

In Burlington, McSorley found work as a copywriter and at the HowardCenter. But within a year, his inner actor began to emerge. McSorley found encouragement from more seasoned thespians, including Adriano Shaplin, Schnabel, Tracey Girdich, John Alexander and others, he recounted.

“I didn’t know stage right from stage left,” McSorley admitted. But over the years, “it’s been really helpful to be a part of the Burlington [theater scene] and be with all kinds of people.”

Lately, McSorley has been involved in a monthly storytelling competition called Extempo in Montpelier. “It’s a passion,” he said of acting. “The storytelling thing has been a twinkle for me.”

But he’s getting pickier about roles. “I’m not still saying yes to everything,” McSorley observed.

Will he develop more of his own stories? His fans may hope for a sequel to Who Made Me? Suggested title: How I Made, and Remade, Myself.