When Mother's Day rolls around each May, most kids give their moms the typical presents — flowers, a birdhouse, a handmade clay pot.

Dana Cabrera chose a different route. A couple of years ago, after his mom had knee-replacement surgery and couldn't ride the steep mountain bike trails that snake through the woods behind their Richmond home, the then-17-year-old built her an easier path. He named it, aptly, Mother's Day.

Today, Mother's Day is part of a larger network of mountain bike trails in Richmond that wind in and around Cochran's Ski Area. The ski hill, founded in 1960 by world-class Alpine ski racers Gordon "Mickey" Cochran and his wife, Virginia "Ginny" Davis Cochran, has long served as an affordable and family-friendly locale where Vermonters teach young kids to ski and snowboard.

"We are all a little shocked by how much this place has grown." Jimmy Cochran tweet this

But in the last few years, the nonprofit hill has also attracted visitors in the off-season, when they carve different kinds of turns through the woods. Though most of the mountain bike trails are for advanced riders, last year Cochran's added several easier and wider ones at the bottom of the mountain, designed specifically for beginners and intermediates. The additions include a pump track, which is a circuit of dirt mounds, banked turns and rolling terrain that riders traverse by "pumping," or using gravity and their own momentum to keep moving without pedaling. All the trails are free and open to the public.

"A little hill like ours is small for skiing, but it's pretty big for biking," said Jimmy Cochran, grandson of Mickey and Ginny and now general manager of the ski area. "We are all a little shocked by how much this place has grown."

Indeed, on a warm summer day last year, Cochran said, he could count as many as 120 cars in the parking lot, all of them belonging to mountain bikers, including families with young kids. Cabrera, whose family owns 70 acres adjacent to the ski area, built several of the newer trails.

Mother's Day wasn't even his first one. Cabrera, now 19, got into mountain biking when he was just a child. According to his mom, Betsy, Dana often spent hours building forts in the woods. When Dana was 13, his father, Andy, suggested they build a trail connecting their property to the neighboring trails.

The father and son spent that summer and part of the next year constructing and fine-tuning their first trail. They named it AC/DC — a combination of their initials, not a tribute to the Australian rock band. Like the Cochran's trails, the Cabreras' are free and open to the public.

But at the time AC/DC was built, Dana Cabrera said, the family assumed no one else would be interested in riding on it because the trail dead-ends at their barn.

"The only experience we'd ever had was riding other trails, and we just figured it out as we went along," Cabrera said. "That trail turned out to be one of the most popular trails for a while."

And the teen wasn't done yet. Having previously worked at Cochran's Ski Area and helped out with its sugaring operation, Cabrera asked Jimmy Cochran the following year for permission to build Mother's Day. Cochran agreed, and he suggested that the trail let out at the base of the ski slope. At the time, there was no easy way to get from the Cochran's parking lot to the trail network on the mountain above. Mother's Day provided that access and helped the ski area become a hub for local riders.

Soon, Cabrera was building more trails in and around the mountain whenever he wasn't at school.

"I wanted to skip my eighth-grade graduation to build trails," Cabrera recalled, "but I wasn't allowed to do that."

By his sophomore year at Mount Mansfield Union High School, Cabrera had gotten permission to take off part of his school day to build trails as a community service project. He built one called A-Day, named for the alternating days of the week when Cabrera was allowed to work on it. With help from his father, who owns an excavating company, Cabrera also built two steep downhill runs: Skully's, and Chutes and Ladders.

In 2017, at age 16, Cabrera incorporated his trail-building company, Mountain Trailworx. At the time, he wasn't even old enough to open a business account in his own name. Mountain Trailworx is now his full-time job. Last summer, after Cabrera graduated from high school, Cochran hired him to help construct the new beginner trails near the base lodge.

"The Cabreras seem to enjoy it as much, if not more, than we do," Cochran added. "It's cool to have neighbors like that." 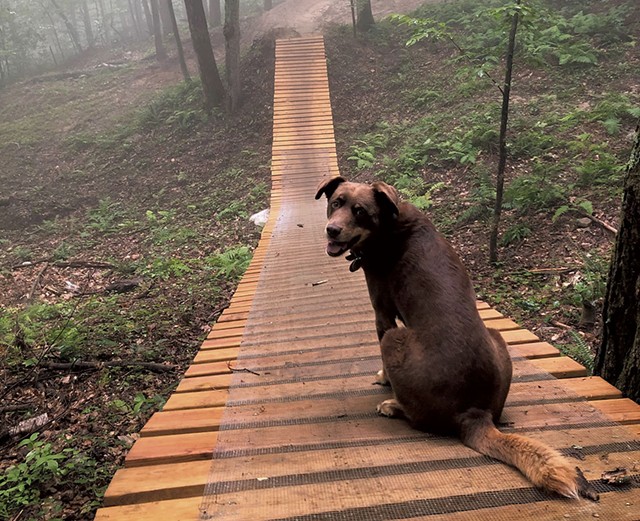 Local mountain bikers seem thrilled to have a convenient place to park that also provides them with easy access to the patchwork of trails maintained by Richmond Mountain Trails (a chapter of the Vermont Mountain Bike Association), the Town of Richmond, the Cabreras and other private landowners.

But Cochran acknowledged that not everyone in the legendary "Skiing Cochrans" family is psyched about the surge in warm-weather visitors.

"It's mostly a generational difference. Various members of our family support it to varying degrees," he said. Some older relatives get irked if they show up to mow the lawn or tend to the flowers and find dogs running loose or cars parked on the grass. "They still look at it like it's their backyard," he added.

But Cochran, a former World Cup racer, Olympian and U.S. Ski Team member with four U.S. Alpine ski racing titles, said he often rode mountain bikes as a way to cross-train in the off-season. Following his retirement from competitive skiing, Cochran coached the University of Vermont's ski team. He regularly brought his athletes to the mountain to train.

Though Cabrera has since moved on to building trails for other landowners, there may be more work in store at his neighbors' property just down the road. Cochran said he'd love to find a way to use the ski lift to pull bikers up the mountain — and perhaps even offer $5 lift ticket deals once a week, the way the ski area does during the winter. Riding the trails would remain free, of course.

"As you can imagine, a T-bar and a bicycle don't interface that easily," Cochran said. "But you could have a lot of good terrain access from a short lift ride."