How a Small-Town Detective Works a Big-Time Case 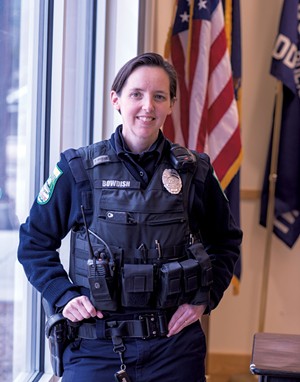 It's not every day that the Middlebury Police Department gets calls from the BBC, People magazine and the New York Times. And until last week, detective Kris Bowdish had never run a press conference, let alone one with a full-house crowd of local and national media.

The small-town police investigator, who plays ice hockey and occasionally helps her dairy-farmer father chase down stray cows, calmly faced the cameras. She addressed a bizarre question that had surfaced in a troubling case: Did millionaire murder suspect Robert Durst, the subject of a recent documentary that aired on HBO, have anything to do with the 1971 disappearance of 18-year-old Middlebury College student Lynne Schulze?

The day before the press conference, Middlebury Police Chief Tom Hanley had issued a surprising statement that revealed the department was investigating a possible link between Durst and the perplexing Schulze case.

"The Jinx: The Life and Deaths of Robert Durst" portrayed its subject, the eccentric member of a prominent New York City real estate family, as a man who has repeatedly gotten away with murder — allegations his lawyers deny. It focused on the disappearance of his wife and the killings of two people he knew.

The film mentions that Durst briefly lived in Vermont and ran a health food store. All Good Things, now converted into an apartment house, was on Court Street in Middlebury. Schulze shopped there on the day she went missing. The last time anyone can place the teenager from Simsbury, Conn., she was standing across the street from the store, possibly waiting for a bus, eating dried prunes.

The intersection between Schulze and Durst could turn out to be nothing more than coincidence. Or it could help solve what police have classified as a case of a missing person, with foul play suspected.

It's up to Bowdish to find the truth about Schulze — and Durst.

"We wouldn't be doing our job if we didn't look into him," Bowdish said.

The Vermont sleuth and her subject come from very different backgrounds. Durst grew up in moneyed circles. His family's real estate business, the Durst Organization, was founded in 1915 and today owns 13 million square feet of office space in Manhattan, including One World Trade Center.

Detective Bowdish grew up just over the hill from Middlebury in Weybridge, population 833, on her family's dairy farm — which is where she lives today. As a youngster, she pitched in as needed. "Getting up at 4:30 and milking cows, I have done that," Bowdish said. She and her sister also designed and ran a seasonal corn maze business for four years.

Did life on a farm prepare her for law enforcement? Bowdish has learned from experience that cows have a way of getting in trouble at inconvenient times. "As anyone in Vermont knows, the cows get out after dark," Bowdish said. "That's always a fun occasion."

Bowdish attended Middlebury Union High School, where she played soccer and lacrosse and competed on the nordic ski team. After graduating in 1991, she went to Colby-Sawyer College in New Hampshire to study exercise science. She earned her degree in 1995 and wanted to explore the big world outside Vermont. First stop: New York City, where she worked as an athletic trainer and juggled several other jobs to pay the rent. After four years, Bowdish decided to adventure westward to Arizona. The market for athletic trainers was saturated, she said, so after seeing a help-wanted ad, she decided to apply for work as a prison guard.

She landed a position in a state prison, where she guarded both men and women. The pay was good. Bowdish remembers a steel door clicking shut behind her as she passed through security her first day. The sound was "very sort of shocking. It was, OK, this is what I'm doing," she said.

The inmates, she learned, "are just people, too," with their own stories. She tried to see their humanity. "One of the things I say a lot is, 'Even good people make bad choices,'" Bowdish said.

Bowdish decided it would be more interesting to work as a police investigator. Her determination and background as a trainer and youth athlete helped her make it through Arizona's police academy.

The physical tests included carrying a 165-pound dummy in a mock rescue. Bowdish, who weighs 120 pounds, succeeded. "It really came down to determination and technique," said Bowdish, who was able to get under the dummy and drag it. "There were plenty of women who just could not pass that."

Her first police job was in Avondale, Ariz., outside of Phoenix.

People who call the police often expect a six-foot-tall man to get out of the patrol car, she said. "You get a call and there's a person there that says, 'Is there someone coming to help you?' And it's, 'No, you got me. I'm here to help.'"

She worked on a variety of cases, including homicides, and learned early on that some people aren't used to seeing a woman in a police uniform. "I can't tell you the number of times that a person I've never met before, ever, is calling me 'sweetie' or 'honey,'" Bowdish said.

Bowdish returned to Vermont in 2005 to be closer to family so she could watch her nieces and nephews grow up. She worked on the family farm for several years, trying to decide whether to pursue agriculture or go back to policing. She decided on the latter and joined the Middlebury department in 2009.

When someone dies in a traffic accident, Bowdish informs the person's family. That's difficult, Bowdish said: "I can't make these things go away that have happened, but I can try to make the interaction that I have with these people the best that it can be."

Bowdish was assigned to the Schulze case in 2012. "It took me a long time to familiarize myself with the case," Bowdish said. "It's a very thick file."

That was the year the department received a tip from someone saying that Durst had owned a store in town when Schulze went missing, Bowdish said. She refused to say who the tipster was, only that the person was not connected with the making of "The Jinx," which was under way at that time.

Its director, Andrew Jarecki, knows the Durst story well. He made a fictionalized movie based on the marriage of Robert Durst and his wife, Kathleen, who went missing in 1982. The film, starring Ryan Gosling and Kirsten Dunst, came out in 2010. Its title, All Good Things, takes its name from the health food store Robert Durst operated in Middlebury.

The movie briefly shows Gosling and Dunst living the young hippie back-to-the-land life in Vermont before returning to New York — just as Durst and his wife did in real life.

Efforts to reach Jarecki for this story were unsuccessful. He did not respond to a request for comment, nor did his brother, Eugene Jarecki, a filmmaker and cofounder of the Big Picture Theater & Café in Waitsfield.

In an interview with Seven Days, Bowdish stayed mum on many details of the investigation, including whether Schulze might have known Robert or Kathleen Durst. She wouldn't reveal where exactly Durst lived in Vermont, although she did say that police searched the property last year. Bowdish would not comment on the results.

Hilda Billings, 94, was postmaster for the tiny town in the 1970s and has no recollection of Durst. Quite a few people in town rented out camps or cottages to summer people from New Jersey and New York, or to writers who were affiliated with Middlebury College's mountaintop Bread Loaf Campus, she said.

Bowdish said few people in the area remember Durst: "He had the store for two years, a pretty narrow timeframe," she said. People who do recall him describe "a seemingly normal guy," Bowdish said.

She called Durst an intriguing person in connection to the case but said she's open to all possibilities. "I'm never surprised when the case I'm working on takes the complete and opposite direction," Bowdish said. "It quite often happens."

Durst's Texan lawyer, Dick DeGuerin, said his client had nothing to do with Schulze's disappearance.

Police won't even say Durst is a suspect, yet they are publicly linking him to the crime, DeGuerin noted. "Frankly, I think it's cruel that they've brought this 44-year-old case up and tried to pin it on Bob in a backhanded fashion, and cruel to the family and friends of this little girl who disappeared so long ago. There's nothing; there's no link," he told Seven Days. "If they have some evidence, come with it," he added.

At the press conference last week, Police Chief Hanley politely greeted reporters and in short order introduced Bowdish, the sole detective and only woman on his small force, so she could run the show.

Durst faces first-degree murder charges in the killing of friend and confidant Susan Berman in California. He was charged previously with the murder of his elderly Texas neighbor, Morris Black, and later acquitted. Durst maintained that Black's shooting was in self-defense and that ensuing panic caused him to chop Black up and throw the pieces into Galveston Bay.

Durst has never been charged in the 1982 disappearance of his wife, Kathleen, but her family and friends have long considered him to be a suspect.

In the final episode of "The Jinx," Durst is heard muttering that he "killed them all, of course" after being shown evidence that could link him to Berman's death. He has since been charged in that case, and is in custody.

His wife has never been found. She disappeared without a trace — just like Lynne Schulze. Bowdish is characteristically measured about this fact. "It's something to take into consideration," she said.

The discovery of a body, even when the person has been missing for decades, can significantly aid in solving a crime. "There's almost always evidence that can be found," Bowdish said.

As she fields calls from "Inside Edition," the Times of London, BuzzFeed and Fox News, Bowdish is hoping that the coverage might shake loose details and memories that will help her move Lynne Schulze from cold case to closed case.

In the recent news stories, 71-year-old Durst has been shown in a bright-red jail uniform, his face gaunt and haggard, his features sharpened into a vacant smile — in stark contrast to the images of Schulze's youthful face at the time she disappeared.

"You can just see so much life ahead of her in these photos," Bowdish said sadly. "That's what I see in them."