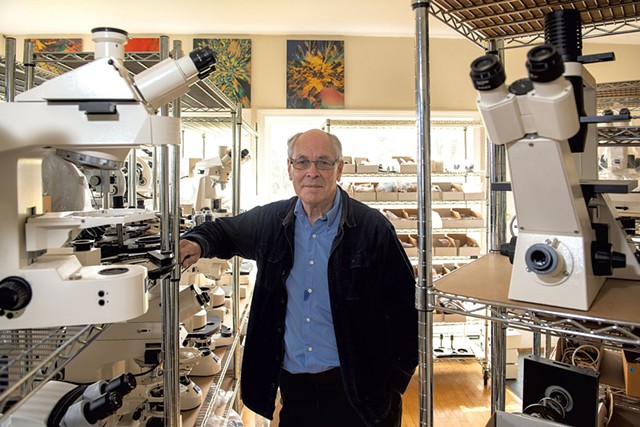 For more than 30 years, John Oren of Charlotte has sold high-end microscopes to some of the world's most prestigious laboratories, hospitals, museums and research institutions. His client list includes France's National Museum of Natural History, Germany's Max Planck Institutes, Sweden's Karolinska Institutet, and the Sandia National Laboratories in Albuquerque, N.M.

The precision optical instruments in Oren's inventory retail new for tens of thousands of dollars, but he sells them refurbished at a fraction of the price. His customers find him by word of mouth. "I haven't spent a nickel on advertising in 30 years," he said.

Yet Oren's microscopes can be found in the surgical suites of cardiologists and neurosurgeons, at remote oil and gas exploration sites, in polar research stations, and aboard marine study vessels. He's even earned mentions in scientific journals for his contributions to scientists' discoveries.

Those elite customers might be surprised to learn that Oren has no formal training in the sciences or engineering. A self-taught expert in optics and microscopy, he ran his mail-order business, Vermont Optechs, for more than 20 years out of a former bingo parlor, snack bar and creemee stand on Route 7 in Charlotte. Passersby most likely assumed the building was abandoned.

Now 73 and nearing retirement, Oren agreed to a Seven Days interview only after the cluttered, 4,000-square-foot warehouse that he rented for years was sold in 2019; he now works from home. If the value of his inventory had become public knowledge earlier, he said, he would have feared being robbed blind.

When this reporter wandered into his shop unannounced in 2017, Oren seemed bookish and slightly surly. He later explained that, on more than one occasion, unexpected visitors had pilfered eyepieces worth hundreds of dollars each.

Opening up in a recent interview, Oren shared a life story as multifaceted as the microscopic world his wares reveal. Perhaps his story's most surprising revelation is that Oren's specialized career began with a trip to a Burlington junkyard in 1986.

Oren was born in New Haven, Conn., to two academics. His father, Paul Oren, a Fulbright scholar, founded the University of Vermont's Department of Sociology in 1958. He met Oren's French-born mother, Francine, also a professor and later a psychologist for the State of Vermont, while skiing in Europe.

Oren grew up in Charlotte, graduated from South Burlington High School, and briefly attended UVM before transferring in 1964 to the University of Paris, where his parents held teaching positions. The family kept their Charlotte home and rented it out, allowing Oren to divide his time between France and the U.S.

For 20 years, Oren worked as a commercial photographer, specializing in artwork reproductions for galleries and museums in Paris and San Francisco. He spent much of his free time in the late 1960s and '70s hitchhiking around Europe, following the Formula One circuit and photographing his favorite race car drivers, often forging press passes to get into the pits.

In the early '70s, Oren landed a job putting on light shows at a well-known Paris nightclub, where he occasionally brushed elbows with celebrities such as the Rolling Stones. He built light show projectors used by dozens of clubs all over France. In those years, Oren said, he always had a camera with him, and he still has scores of slides from the era.

In the early 1980s, Oren was living in San Francisco when he chanced on a field of optics he'd never previously explored.

"I bought a $50 microscope at a flea market and thought, Wow! This is pretty cool," he said. "It wasn't immediately related to photography, but it ... sensitized me to the existence of microscopes."

In 1984, Oren returned to Vermont. Two years later he began renovating his family's Charlotte house, which was in rough shape after years of tenants. Replacing the old plumbing, he amassed a pile of spent copper pipe, and it seemed wasteful to throw it away. He took it to a scrap metal yard in Burlington, where the owner put it on a scale and handed him $45.

Surveying the yard, Oren noticed a pile of high-tech electronics. The attendant told him the scrapyard had a contract with the IBM plant in Essex Junction.

As Oren pored over the electronics, most of which he didn't recognize, he spotted small lenses bearing the labels of "Leitz" and "Wetzlar Germany."

"I knew that was the company that makes Leica cameras," he said.

Then Oren spotted another name he recognized: Zeiss, which made some of the world's best optics. He bought a box of discarded lenses for 50 cents per pound.

When Oren wrote to Leitz to ask what the lenses were for, the company sent him the instruction manual for a metallurgical microscope. Inside were photographs of the microscope's other parts, which Oren remembered seeing at the scrapyard. He returned the following day and salvaged those, too.

As Oren later learned, IBM had recently converted its production line to manufacture six-inch instead of four-inch semiconductor wafers. As a result, the company discarded hundreds of microscopes that were too small for inspecting the larger wafers.

Soon the scrapyard was calling Oren whenever a truck arrived from IBM. After several visits, Oren had a microscope fully reassembled. And when he flipped the switch, it worked.

"The timing was really fortuitous. I was able to fill the living room of the house with spare microscope parts," he recalled. "[Leitz] had also sent me pricing information, and I realized, Holy God! This thing costs a fortune when it's new."

Oren decided to settle in Charlotte; during the house renovations, he met Dru Roberts, his future wife, who ran a furniture-stripping business on Burlington's Pine Street. However, career opportunities in Vermont for a commercial art photographer were few. So Oren placed a two-line classified ad, which included logos for the microscopes he'd salvaged, in a professional publication called the Scientist.

"And then the phone started to ring," he said.

Oren sold his first scope to the UVM College of Medicine for several thousand dollars. He realized the used microscope market was more interesting — and lucrative — than replacing drywall in his parents' house.

Shortly thereafter, Oren received a cease-and-desist letter from attorneys at Zeiss warning him that he wasn't authorized to use the company's logo. Oren changed his ad, but his phone kept ringing.

Next, Oren discovered a network of industrial auctions that sold surplus scientific equipment. In his travels, he'd stop at authorized microscope dealers and raid their shelves of literature to educate himself on what to buy and what was useful to the widest audience.

Working alone, Oren found there was still much he didn't know, including the finer aspects of microscope maintenance. So, at an equipment auction in Massachusetts in the early 1990s, Oren befriended Bob Dixon, whose father had founded a biomedical and industrial microscope firm called Atlantex (now Micro Video Instruments). For years, the company was an authorized Zeiss dealership, and Dixon was one of a handful of technicians trained to service its high-end scopes.

Soon Oren was bringing Dixon microscopes to clean and repair. When Zeiss withdrew the company's franchise, Dixon called Oren in Vermont and told him Atlantex had a dumpster full of the company's literature. "John was there within three hours and took all of it," Dixon recalled.

In 1999, Oren convinced Dixon to move to Vermont and work for him, which Dixon did for seven years.

"John was pulling stuff out of dumpsters that was going to be crushed. He'd bring them to me, and I'd piece them all together," said Dixon, who still lives in Monkton. "When he started out, everything he had was junk — I mean, worst-case repair scenarios for a service guy."

By salvaging that "junk," Oren was filling an important niche in the scientific community.

"Microscopes are not inexpensive. There were, and still are, laboratories that cannot afford new stuff," said Paul Millman, founder of Chroma Technology, a Bellows Falls maker of high-end optical filters and coatings. "So John was indispensable that way."

Oren credits his ongoing success to more than mere economics. Over the years, he said, he became adept at providing customers with exactly what they need at a price they can afford.

Research microscopes are modular, Oren explained, and he can build one to precise specifications. Often, his first question is "How much do you have to spend?" Then he crams as much value as he can into a scope, avoiding extraneous bells and whistles.

"Over the years, I've learned a lot about the applications [of the microscopes], so I can talk shop with the researcher," he added. "And that, very often, closes the deal."

Keeping up with advances in microscopy hasn't been easy. Lasers and LED-illumination technologies allow researchers to probe ever deeper into previously invisible areas. While Oren understands the optics and micromechanics of his scopes, he admitted that he's not conversant in the software that operates the latest models, and he lacks the high-tech diagnostic tools to repair and maintain them. As he put it, "My career is winding down by itself."

That doesn't mean his business is. New research microscopes can cost $30,000 or more, well beyond the reach of many researchers, and Oren continues to see demand for his refurbished products. As he put it, "The science doesn't stop just because the funding does."

Oren doesn't know what will become of Vermont Optechs when he retires. Neither of his daughters wants to take over the business, and, as he put it, he has yet to find "a white knight to write a check and back up a truck."

Oren hopes to find a successor with a science or technology background who's willing to pick up the ball and run with it. He'd even stay on long enough to help with the transition. As he pointed out, his industry is clean and a high-tech form of recycling, with a steady customer base.

Beyond its financial rewards, Oren always finds his work intellectually stimulating, he said. Whether he's shipping microscopes to a mining operation in Wyoming where the only mailing address is a mile marker on an unnamed dirt road, or retrofitting a scope to analyze ice core samples in the Arctic, he's acquiring new knowledge every day.

"It's a specialty niche," he said, "but I enjoy every minute of it."

The original print version of this article was headlined "Deep Focus"