Nearly three years ago in August, white nationalists, neo-Confederates, neo-Nazis and other far-right groups convened in Charlottesville, Va., for a Unite the Right rally. During the event, self-identified white supremacist James Alex Fields Jr. drove his car into a crowd of counterprotesters, killing 32-year-old Heather Heyer and injuring dozens of others. Like most people who saw or heard about the incident in media reports, Richard Cook was horrified.

"After watching the grotesque events, and after a lot of anger and sadness and pacing around, I thought, This isn't the last time this is going to happen," he said.

Then Cook turned that anguish into a way to bring positive energy into the world: with the words "Don't Hurt Anyone."

The gentle imperative is now emblazoned — in blocky capital letters — on T-shirts and tote bags that Cook envisions in his Winooski condo and enlists American manufacturers to make. At first he just wore the tee himself and carried small batches of them around to hand out. More recently he's established a website for online commerce.

The 49-year-old is quick to note that he is not a graphic designer by training. His professional experience is in development and strategic planning for nonprofits in Washington, D.C., particularly ones with a progressive mission. He continues to offer consulting services.

With some 20 years in this line of work, Cook described himself as "marketing-savvy," a skill that informed the evolution of Don't Hurt Anyone. He liked the idea of a strong but nonthreatening message, spelled out in a simple font and delivered on that time-tested human billboard, the T-shirt. "I used to work for the 9:30 Club," he said, referring to the famous D.C. nightclub, "so I have a punk-rock background. I thought, What would Joe Strummer wear?"

One can, indeed, visualize the politically outspoken Clash vocalist/guitarist sporting a Don't Hurt Anyone shirt, were he still alive. The messaging works for anyone from a kindergartner to a raging granny and is germane to any number of grievances.

"The word 'hurt' can mean a whole range of things," Cook observed. In the main, though, the slogan is simply "about being nicer, kinder, respectful. Those things are sorely lacking."

Basically, Cook has reworded the Golden Rule, put it in a cool typeface and offered it on merch that any of us can wear.

Cook said he has no interest in "becoming a T-shirt mogul," and that appears to be a whopper of an understatement. So far, his "business model" primarily involves giving the T-shirts away.

It started when Cook was on vacation a couple of years ago, staying at an Airbnb in Hudson, N.Y. One morning he went out for coffee wearing a Don't Hurt Anyone tee and was stopped by half a dozen people who asked him about it, he recalled. He ended up getting all of them a shirt.

Whenever he wears the shirt in public, he gets the same reaction. "Total strangers stop and talk to me, anywhere in the country," Cook said. "I've had a lot of great conversations."

Someone once came up to him and said, "This is kind of like 'Life Is Good,'" he related, referring to another trademarked apparel company. "At first I thought that was a good thing, but then I thought, No, the world is not good for many people."

Cook has sent complimentary Don't Hurt Anyone shirts to select celebrities — particularly musicians and DJs — and was thrilled to get a personal thank-you postcard from Ian MacKaye of Fugazi. Other bands have "come on board," Cook said, citing Wilco and Old 97's.

Here in Vermont, it's no surprise that Cook connected with popular and righteous DJ and performer Craig Mitchell. "Craig was an early adopter," Cook said. "I think he has one of every prototype I've made ... Craig definitely rocks the shirt."

Mitchell confirmed that Cook reached out to him to help spread the word about Don't Hurt Anyone, as well as to make sure the message wouldn't be seen as treading on that of Black Lives Matter. Mitchell felt it did not. He wears a Don't Hurt Anyone shirt "at least two times a week," he said — at Red Square gigs or during one of his virtual dance parties for local nonprofits, which began during the pandemic shutdown. 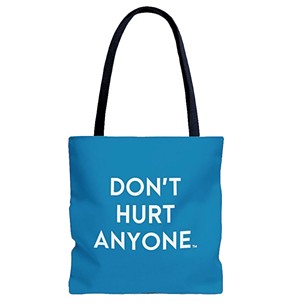 Wearing the message on his chest feels "really good — it's a softer blow, not in your face," Mitchell said. From a DJ booth or a digital platform, he hasn't been able to experience the multitude of in-person conversations that Cook reported, but, he said, "Tons of people will respond with a smile, a wink, a nod, that kind of thing."

While he still gives some product away, Cook is making an effort to turn Don't Hurt Anyone into a viable business. His website displays various styles of shirts for men, women and children, as well as tote bags; subscribers to his newsletter get info on new designs, special offers "or other perks." He's not really making any money, Cook said, but he's "staying afloat."

This summer, Cook was invited to apply for what he called an "experiential network" course at Northeastern University; in it, Don't Hurt Anyone is a case study in which graduate students and faculty will "take an almost forensic look at everything DHA," he said. Cook dubbed the group "tech students with a business bent." Perhaps their assessment will help Don't Hurt Anyone grow as an online apparel enterprise.