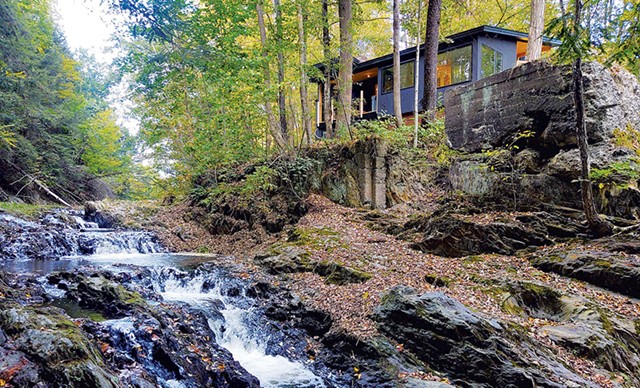 Ward Joyce had yet to set foot inside the tiny waterfront cabin in Waterbury when he told his Realtor that he wanted it.

"I cannot believe this piece of property is for sale," Joyce remembered saying the first day he saw it in 2020. "I'm making an offer right this minute. What do we have to do to close?"

Neighbors had already been offered the opportunity to buy the red clapboard bungalow before it went on the market, but none was interested. Either they didn't want the hassle of renovating it, Joyce surmised, or they thought it wasn't worth the $150,000 asking price.

"We're 100 yards from the interstate, but you feel like you're in a state park." Ward Joyce tweet this

Tucked behind a cluster of more contemporary houses a mere 100 yards from Interstate 89, the 630-square-foot cabin was built as a wool-drying shed in the 1930s. One wall still had the four-foot-wide double doors that allowed farmers to roll the wool onto a slatted floor that opened above a dirt basement. In the 1960s, the shed was converted into a one-bedroom bungalow with a Murphy bed, bathroom, fireplace and kitchenette.

"It was like a 1960s camp on a lake, with two-by-four walls full of mouse shit," Joyce said. The cabin was initially mapped within the 100-year floodplain, meaning that the Federal Emergency Management Agency deemed it at high risk of flooding. Based on its proximity to Graves Brook, the camp seemed destined to wash away in the next major storm.

But Joyce, a Montpelier-based architect and builder, immediately recognized its potential. Newly single and an empty nester when the pandemic hit, he wanted to throw himself into a project — specifically, creating a funky new living space for himself in a wooded hideaway.

The finished product is a tricked-out house that feels far more spacious and remote than its modest dimensions and central locale would suggest.

"This is a full exercising of my skills," Joyce said. "At 56, I brought 30 years of experience to bear in this project."

The location has many unexpected benefits. The highway is concealed by vegetation and a cliff, and most of the year the babbling brook masks the traffic noise, Joyce noted. And though the property is less than half an acre, it includes 300 feet of waterfront, as well as remnants of an old stone dam, which Joyce plans to convert into a patio.

The cabin itself is among the last of seven historic structures — along with the original location of Hen of the Wood restaurant, which is a short walk downstream — that once stood along Graves Brook. 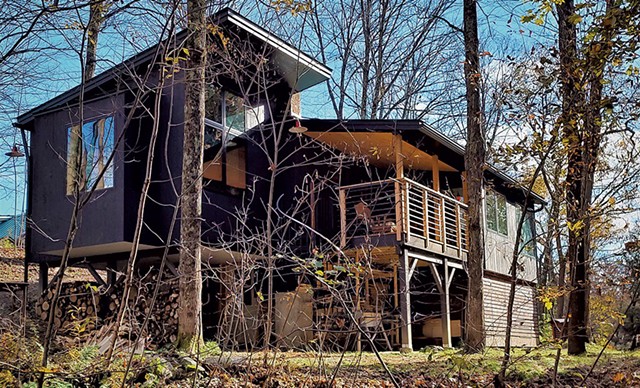 "It's a pretty wild property," Joyce said on a recent tour. "It's this weird environment where we're 100 yards from the interstate, but you feel like you're in a state park."

Joyce admitted that, once he'd bought the place, it took him a while to decide what to do with it. After gutting the cabin, he opted for a modern redesign. His floor plan included three additions, a full thermal retrofit, and conversion of the house to all-electric heat and appliances.

He also excavated several feet of the "dirt hellhole" basement, then poured a new concrete floor and converted the lower level into a second bedroom, second bathroom and laundry room. In all, the renovation tripled the interior living space.

Despite the building's age, the Town of Waterbury never included it as part of its Mill Village Historic District. Joyce's building permit was subject only to standard setback and waterfront requirements; in fact, Joyce's engineer later determined that the house isn't within the 100-year floodplain after all, which saved him thousands of dollars on insurance.

As both the architect and the general contractor, Joyce used a design-build approach, which enabled him to make material decisions on the fly while construction was under way. He estimated that 50 percent of his aesthetic choices happened during the building process; in a conventional build, more than 90 percent are decided in advance. 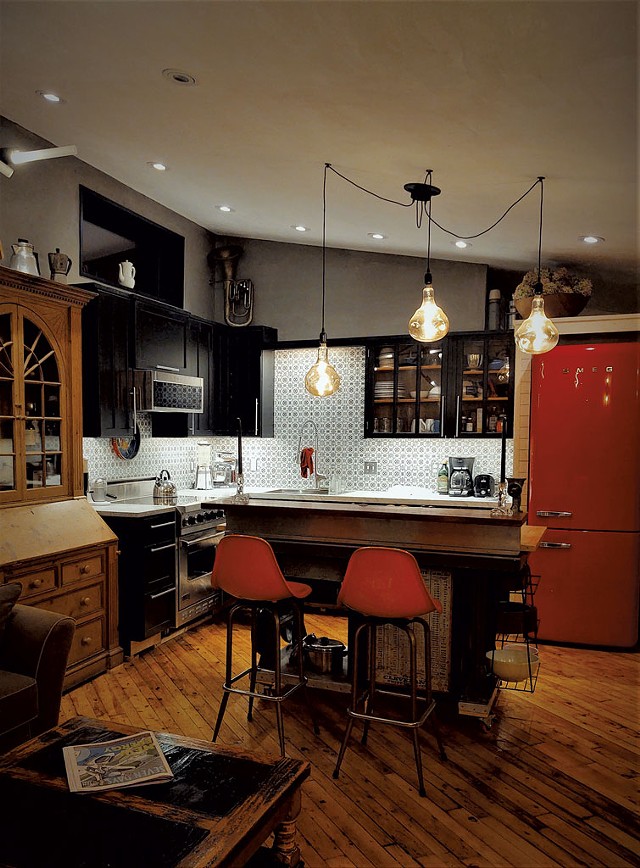 "Design-build allows for the evolution of ideas," he explained. "I knew what the floor plan was going to be and the elevations were going to look like. But I hadn't made all the material decisions."

For example, Joyce initially had planned to build either two decks overlooking the brook or one large deck that stretched the length of the house. During construction, however, he realized that a single, smaller deck would suffice. Instead, he extended the roof to cover a circular metal staircase that accesses the lower floor.

When facing the front porch, a visitor can see what Joyce called his "industrial-chic" aesthetic on full display. He chose black siding for some surfaces, horizontal wooden slats, steel bars on the railing and a green standing-seam metal roof. The walls along the front porch are lined with cold-rolled steel, providing an attractive, rusty patina.

Inside, Joyce kept the original wood floors and an open floor plan in the kitchen and den. Though this level is just 750 square feet, its 12-foot ceilings and ample windows, many of which face the creek, make the interior feel bright and airy. 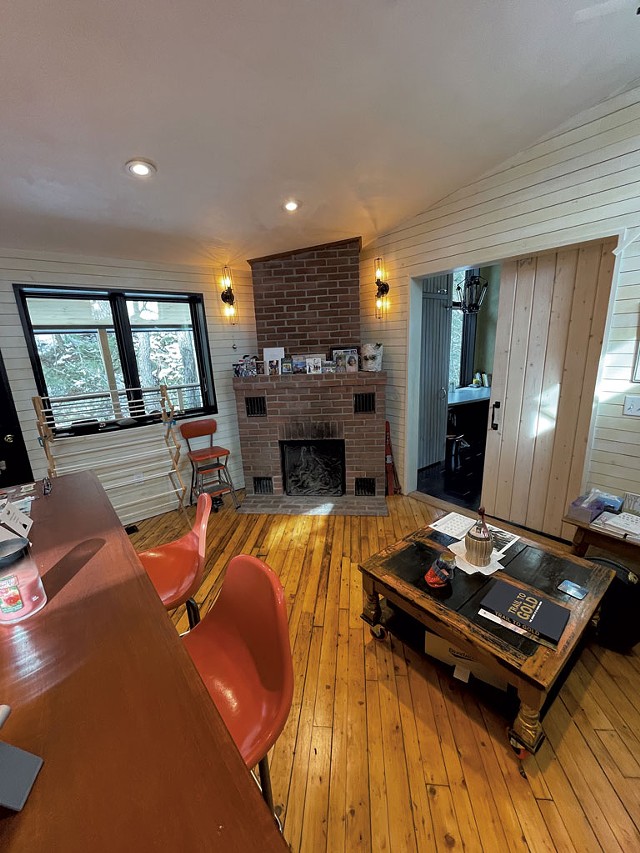 The main room features a collage of styles: Islamic tiles for the backsplash, stainless steel appliances, a mix of antique and modern light fixtures, and an industrial-style island, which Joyce built on wheels so that it can be moved for parties. The visual focal point of the kitchen is a large red midcentury-modern Italian refrigerator.

Because Joyce likes to decorate with antiques, he included an old-time coffee grinder on the island, a brass baritone horn atop the kitchen cabinets and a cast-iron fireplace cover, which he bought at an antique shop in Burlington. He'd assumed the cover was Early American until he discovered a "Made in China" stamp on the back.

"It's just a piece of iron from a Chinese foundry," he said, "but I think it's great."

The bedroom, which is a new addition, sits just off the kitchen behind a sliding barn door. Joyce kept the old Murphy bed, which still folds into the wall. He called the style "a little bit steampunk chic." The walls aren't painted but feature a mud-and-plaster mixture that includes green-black clay dyes, which created an old-world finish. Joyce is most excited about the large bay window reading nook, which overlooks the brook. 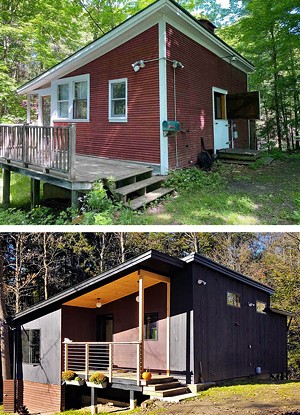 The second addition, which serves as a breakfast nook or reading room, has nearly floor-to-ceiling windows and also juts out toward the water. Combined, the two window-intensive rooms create the sensation that you're camping along a river in the woods.

"One of the first weekends I stayed here," Joyce recalled, "I was standing at my dining room table, the sun was going down and a coyote ran across in front of me in the setting sun."

Because of the limited space, Joyce maximized the storage areas, with shelves tucked away in cabinets and nooks. One such shelf lifts open to reveal a laundry chute to the basement.

Interestingly, the only room Joyce didn't touch was the original bathroom, which already had an antique sink in good condition. After investing $400,000 in the house, including his professional time — he spent six months on-site full time — he didn't see the point in dropping another $15,000.

While the major interior renovations are done, Joyce has many more ideas percolating for the property. In years to come, he plans to add a firepit, a hot tub, stonework, plantings and a patio overlooking the brook.

"With real estate, it's all about place. But even more, it's about place-making," he said. "What you can accomplish on a property takes more time and thought than just getting the building done. I want to trick out the land, as well."

The original print version of this article was headlined "Backwater Beauty"