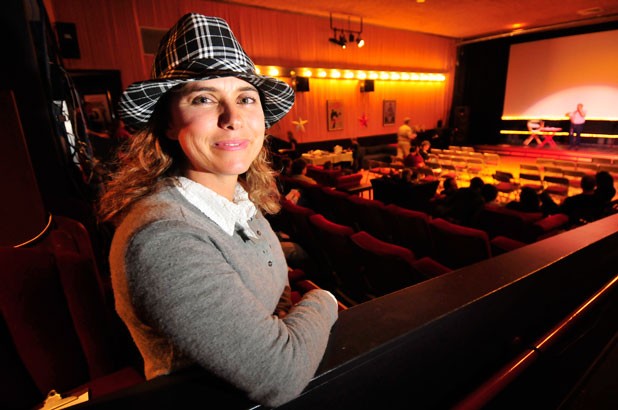 Picture this: Two scientists from the Smithsonian Astrophysical Observatory are sitting on a red couch on a stage and talking casually about the human race’s options for a new planet when the sun inevitably becomes a red giant and swallows the Earth … in about five billion years. The roughly 100 people watching them are rapt.

“We never should have demoted Pluto,” jokes one of the scientists, Margaret Geller, and everybody laughs. Outside the theater, kids are playing in the lobby, gleefully banging on an old piano. In the nearby bar, a young couple orders chocolate cake while singles sip beers. It’s just another Thursday night at the Big Picture Theater & Café in Waitsfield.

In the last year or so, the venue has become much more than that; it has evolved into a multigenerational community center. This month, Big Picture is celebrating its five-year anniversary with special community events, such as a car and bike jam that will feature race-car rides, a picnic and a screening of Disney’s Cars 2 on June 25. It’s a family-friendly opportunity for newcomers to get acquainted with the Valley scene.

Big Picture is sustained largely by the local organizations and individuals who hold events there. Claudia Becker, 43, who owns the theater with her ex-husband, Eugene Jarecki, didn’t promote that astrophysics talk; Green Mountain Global Forum did. Likewise, local biologists Ky and Lisa Koitzsch drew about 200 people with a presentation last month on the wolves of Yellowstone National Park. And, earlier this June, young New Hampshire writer Erin Moulton read from her new novel, Flutter, to about 50 friends and family in the theater lobby.

“I let her use the space for free,” says Becker, “but everybody bought doughnuts and lemonade.”

Until last year, the pixie-like, German-born Becker programmed all the venue’s events herself. Now, she says, close to 90 percent of them are organized and promoted by other groups — and there’s almost always something going on. “That transition was the key” to staying in business, Becker says. This year, for the first time, the place is breaking even.

Big Picture continues to offer its own regular events: high-definition broadcasts of Metropolitan Opera performances, karaoke, a jazz brunch, kids’ playgroups and the popular Valley Nite each Wednesday, which features $1 drafts and $6 movies. But it’s the consistent and diverse community offerings that make the place buzz.

Becker was living in New York City with Jarecki when she first came to the Mad River Valley about 13 years ago — she worked a seasonal job at the Vermont Icelandic Horse Farm in Moretown. At the time, she observed a dearth of community gathering places. In Germany, Becker notes, “Cooking together, eating together, hanging out together was much more present in daily life than I found here.”

So, when the couple moved to Vermont with their daughter after September 11, 2001, Becker began angling to fill that void. She got involved with the Eclipse, the movie theater and bar that preceded Big Picture, and for several years organized a human-rights-oriented film festival there. When the Eclipse closed in 2005, Becker and Jarecki bought it. “I had never run a business,” she admits. “It was a stretch. But it was a time in life where it just seemed like an opportunity.”

The couple renovated the 1982 building, adding a kitchen, wood floors and booths in the area that would become the restaurant. They tore out the slanted floor in the larger theater and replaced it with a dance floor. Becker had a clear concept from the start: She wanted to create “a local gathering place with a global dimension,” she says. “It became really clear really quickly that, in order to make this work, we’d have to offer a whole range of things.”

For now, the combination seems to be working, thanks to the community events and, of course, the restaurant and bar, which adjoin the two theaters. The whole place has a slightly eccentric, vintage look. The walls are decorated with old movie posters and framed antique postcards. The bar looks more like a soda fountain, with a row of Barbie dolls arranged above the top shelf of liquor. Outside, colorful lights surround a patio where twenty- and thirtysomethings drink their drafts on warmer nights.

Well-worn couches are everywhere — on the stage, in the theaters, in the bar — which may be one reason regulars treat the place like their living room. “The other day I had to tell a guy to take his feet off the table,” Becker says with a smile. At a movie, a couple snuggle in the clamshell love seat in the back of the theater, feet on the seats in front of them.

Later in the week, friends of the venue gather for an auction in the same theater that hosted the scientists. The proceeds will help Big Picture pay for new insulation and other building upgrades to improve energy efficiency. Community members have donated unusual gifts for the auction, including a “jam session” with local architecture legend Dave Sellers; and a three-course German meal at Becker’s house, with yodeling by the host. The event is also a potluck, even though the restaurant is just feet away. The smells of barbecued chicken and slow-cooked chili fill the theater.

After every few items auctioned, the Waitsfield a cappella group In Cahoots perform a barbershop song. The four ladies in matching red tops clearly have a lot of friends in the audience. When they sing, “How do you like your eggs in the morning? I like mine with a kiss,” a wave of hooting and hollering rolls through the theater.

Out in the bar, it’s a whole different vibe. Tim Holter is having a beer, marveling at the guy playing the squeezebox with the French cabaret band Déjà Nous. “It’s a meeting place for all of us,” he says, and, as if on cue, his three kids come streaming into the bar to say hi. Then so does his wife, Gracie.

The Holters moved from Los Angeles to Warren about four years ago and are regulars at Big Picture. Tim’s band, Tim & Heff, often plays in the bar, and Gracie makes what she claims are the best tamales in Vermont on the first Thursday of each month for the restaurant’s Mexican night.

It’s exactly what Becker envisioned five years ago when she set out to create a local gathering place. “For the longest time, I was putting out flyers and begging people to come here,” she says. “Now, each group brings their own people.”

Still, Becker dreams of reaching an even broader community. She’s applied for nonprofit status for something she’s calling the Bigger Picture Community Fund, which she hopes will support more educational programming at the theater. Meanwhile, she’s open to just about anything.

“Even if I let people do something for free here, if they bring 20 people, I benefit because maybe they have dinner,” Becker points out. “The symbiotic relationship … I love it. I think without that, we’d still be really struggling.”