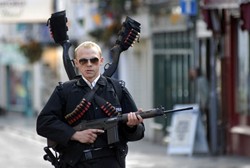 When it comes to cinematic crime-solving, the English excel at tweedy murder mysteries set in tidy hamlets. Even on the grittier TV series "Prime Suspect," Helen Mirren didn't pack heat; most real cops in the U.K. don't carry guns on patrol. So what are the small-town officers in the comedy Hot Fuzz doing with a whole roomful of them?

The short answer is they've confiscated them from an ancient West Country farmer who speaks with an impenetrable burr and is also hoarding a sea mine. The long answer is that the movie is a hybrid: a very British satire of very American action movies, which makes no secret of its makers' genuine love for the genre. At one point, buffoonish Constable Danny Butterman (Nick Frost) bonds with his uptight superior by making him watch the overwrought 1991 guns-'n'-surfboards flick Point Break. You just know that by the end of the movie, he'll get a chance to re-enact his favorite scene from that film in real life.

Hot Fuzz comes from the team of writer/director Edgar Wright and writer/star Simon Pegg, who were responsible for the 2004 cult comedy Shaun of the Dead. In Shaun, they spoofed horror movies, with Pegg and Frost as slacker buds fighting off zombies - and, surprisingly enough, growing up a little along the way. Hot Fuzz is slicker, with a higher budget. And that's appropriate, since the movies it mocks are slicker, too. The camera does a lot of "C.S.I."-style swooping and zooming, with cold blue lighting effects and ominous rumbles on the soundtrack. It's all a bit excessive, but that doesn't get in the way of some well-written patter delivered in the solemnly silly style of Monty Python.

Small, wiry Pegg plays Nicholas Angel, the very best cop on the London force, an officer so doggedly dedicated that his superiors realize he's making everyone else look bad. So they give him a promotion and transfer him to Sandford, an idyllic, stone-cathedral village that hasn't seen a murder in 20 years. There Angel wastes no time in rounding up under-age drinkers at the pub - i.e., most of its patrons - and taking a drunk driver into custody. The lush turns out to be Constable Butterman, who's also the son of Angel's new boss.

Having spent his life in Sandford, this amiable wastrel, who can't shoot straight, wishes he could see some "proper action and shit." He becomes Angel's partner and ally against a stationhouse full of yokels who call him "Nichol-arse" and classify every death, no matter how suspicious, as an accident. Soon they're on the trail of a black-cowled killer who may or may not be linked to a supermarket owner, played by former James Bond Timothy Dalton as so moustache-twirling and unctuous that he might as well have EVIL tattooed on his forehead.

Hot Fuzz moves at a breakneck pace, with so many throwaway sight gags that it sometimes feels like a live-action version of "The Simpsons." (Cartoonish violence and gore abound, too.) Some jokes work; others don't. But when it reaches the last act, where many high-concept comedies falter, Hot Fuzz kicks into high gear. The mystery is solved cleverly, and the climax is what critics like to call "an adrenaline-fueled thrill ride" - a phrase the movie mocks.

A bring-the-kids comedy like Wild Hogs this ain't. It's not a brilliant satire, either - these days, many action movies can't even take themselves seriously. But if you can't help giggling at the notion of little old knitting-circle ladies blasting away with big guns in slow-mo à la John Woo, this one's for you.