Hot for Heifer: Montpelier Cops Find a Cow in a Car 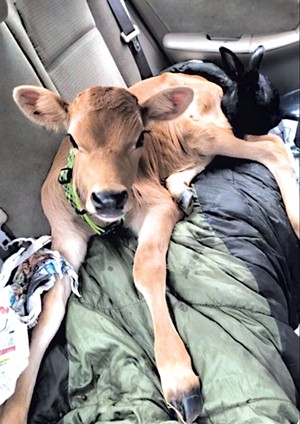 This was no ordinary moo-ving violation.

Cops responding to a parking complaint on Barre Street in Montpelier last Friday found two animals left unattended in a car. And it wasn't just Fido waiting for his owner to come back: A calf was splayed on the back seat.

"I've been around 22 years, and I've not seen a cow in a car," Montpelier Police Sgt. Eric Nordenson said. "I've seen goats — but never a cow."

A bunny was keeping the cow company.

The responding officers "were able to locate the owner, and it looks like they gave him a decent little talking-to about leaving your pets in the vehicle unattended," added Nordenson, who wasn't there himself. "At no time were the animals in distress."

In fact, the calf and the rabbit both look quite content in a photo snapped by one of the officers. But, while funny, Nordenson said the incident could have had graver consequences. High temperatures reached 70 degrees in Montpelier on April 19, plenty warm enough to fatally overheat an animal trapped in an enclosed space. Nordenson said that's especially important to remember as the days grow warmer.

To make the point, the cops posted a photo of the cow in the car on Facebook with a message urging drivers to "leave your dogs (or cows or bunnies) at home so these beloved furry family members are not put at risk of heat related health issues or worse." The post went viral, reaching 157,000 people and garnering 1,500 shares and 280 comments, according to Nordenson.

"If that's what it takes to save a couple of animals, then so be it," he said. "We'll deal with the cows in the cars."