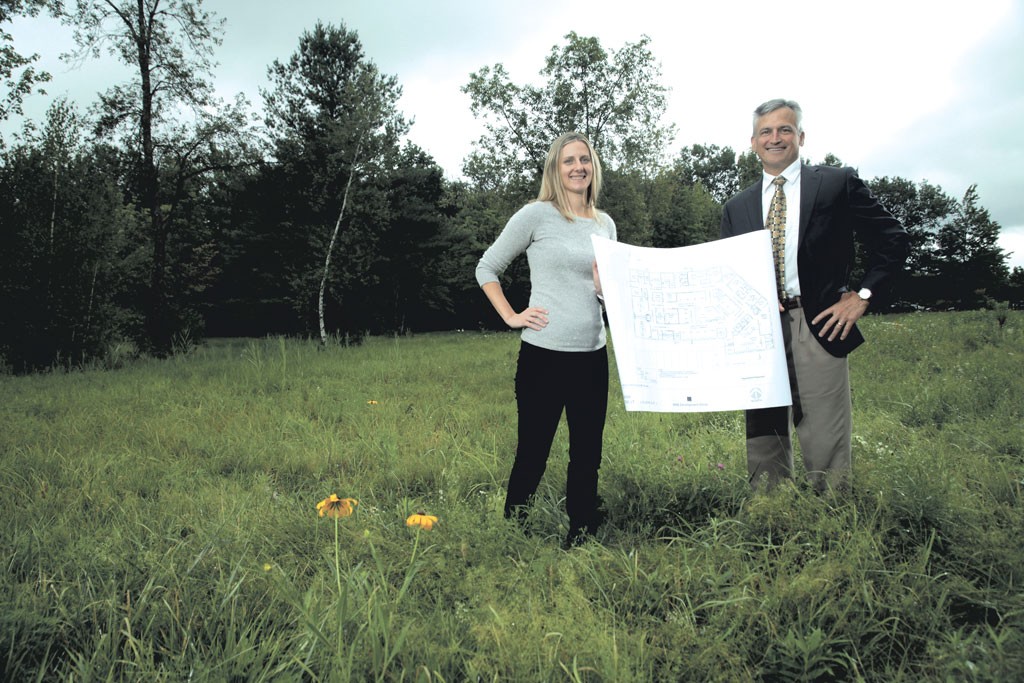 More than 5,000 freestanding surgical centers have sprung up across the country since 1970, including 23 in New Hampshire and 116 in New York. But Vermont has just one: South Burlington's Eye Surgery Center opened in 2008.

Now an investor group with nine members — most of them doctors — wants to open the state's second non-hospital surgical facility. The for-profit, Colchester-based Green Mountain Surgery Center would offer nonemergency surgeries and procedures such as colonoscopies, epidural injections for pain and hernia repair. Patients would be treated and go home the same day.

Amy Cooper is the lead spokesperson for the group and one of its larger equity owners. She came to Vermont two years ago to become executive director of Healthfirst Inc., an association of independent physicians. Comfortably attired in a peasant blouse, shorts and sparkly sneakers, the graduate of Harvard College and the Wharton School offered background for the project.

"I came to Vermont with an idea of what was going on in health reform everywhere else," explained Cooper. "I looked around and thought, We ought to have more options in Vermont." In Chittenden County, where the population is both growing and aging, an "ambulatory" — aka outpatient — surgical center would seem to fill an obvious need, she said, by providing routine surgeries at lower costs and in a setting that is less intimidating than the hospital.

Cooper is one of only two publicly identified owners of the proposed center. The second, Dr. Thomas Dowhan, is a St. Albans-based ophthalmologist and part owner of the eye surgery center in South Burlington. He said fellow doctors regularly inquire about using the operating rooms in his facility for other kinds of surgery. But as a condition for its approval seven years ago, state regulators restricted it to eye procedures only.

In June, Cooper and Dowhan asked the Green Mountain Care Board for a certificate of need for the center at 535 Hercules Drive in Colchester. The building owners would front the $1.6 million to construct a facility with two operating rooms, four procedure rooms and 14 recovery beds. The investor group expects to spend an additional $1.8 million on planning and startup costs. The center is projected to lose $126,787 in the first year, but to generate profits ranging from $250,000 to $282,000 in the three years after that.

The application states that 16 doctors have expressed interest in operating at the center. Those doctors would perform approximately 5,132 surgeries the first year, increasing to 6,000 by the fourth. More than half would be gastrointestinal, a category that includes outpatient colonoscopies and endoscopies. Pain-management treatments, such as spinal steroid injections for back or leg pain, would account for 800 to 1,000 annual procedures.

"I don't see any downside to it," said Dave Bellini, president of the Vermont State Employees Association, in an interview last week. He wrote a letter of support on behalf of the VSEA that was included in the surgical center's application. "They say they would bring equal quality at much less cost," he told Seven Days. "That would save taxpayers money. That would save state employees money."

Lower cost is the top selling point for the new facility, Cooper said. Medicare pays such surgery centers 56 percent of what hospitals receive. Medicare pricing is the basis for negotiating payments with commercial insurance companies, she added. Forty percent of the center's clientele is expected to be on Medicare.

Seniors wouldn't be the only beneficiaries. Burton also supported the project with a letter. "When I learned about it, I said, 'Why hasn't this been done yet?'" explained Justin Worthley, vice president of human resources at Burton. "It seems like a no-brainer."

But the project has opponents. They argue that a freestanding for-profit surgical center would threaten the financial health of hospitals and add to the cost of health care in Vermont by duplicating facilities and services. The Vermont Association of Hospitals and Health Systems, which represents all 16 nonprofit hospitals in the state, and Northwestern Medical Center in St. Albans both have been granted interested-party status in the case.

It's round two for Jonathan Billings, a dress-shirt-and-tie vice president overseeing planning and community relations at Northwestern Medical Center. Seated at a table in his office across the street from the hospital, Billings related that the hospital opposed the eye surgery center eight years ago, "and we still think the eye center wasn't needed."

The worries that medical center officials had about the eye center proved to be founded, Billings said, referring to the facts of both cases without consulting the files on his tidy desk. He said zip code data for the eye center's patients showed that about 400 people from the area the St. Albans hospital serves now opt to have eye surgery at the South Burlington center each year.

"We are concerned based on that precedent," Billings said. The four operating rooms at Northwestern Medical Center are busy only half the time, he said. The 40-bed hospital has available procedure rooms, too. All but three treatments on the nine-page list of those to be provided at Green Mountain Surgery Center could be done at Northwestern, Billings said. "From our perspective, it isn't meeting a need," he said.

"We have done a good job of retaining our supply of surgeons," Billings continued. But he contended that if the number of surgeries declined significantly at Northwestern because of a competing surgical center 20 miles south, some surgeons might be unable to sustain their practices.

The hospital association is fighting the battle for other medical institutions — such as Copley Hospital in Morrisville, which has applied to the state to replace its aging operating rooms.

Bea Grause, president and CEO of the hospital association, said she hears complaints from her colleagues around the country that outpatient surgery centers can weaken hospitals. "They syphon off services that help hospitals maintain a bottom line," she said. UVM Medical Center currently performs an average of 40 to 50 colonoscopies per day.

In a document filed with the Green Mountain Care Board, the hospital association promised to back up its claims about the threat the surgical center could pose.

The hospital association and Northwestern Medical Center have already submitted lists of questions they want Cooper and her partners to answer. The state's health care advocate has concerns, too. The staff of the regulatory board has also requested information.

Cooper is unfazed by the barrage of questions and criticisms. When asked about various challenges, she smiled and responded without hesitation. Attorney Eileen Elliott sat next to Cooper in the boardroom at Dunkiel Saunders Elliott Raubvogel & Hand in Burlington. She had a multi-tabbed three-ring binder of documents at the ready, but Cooper consulted her only once.

Grause has asserted the surgical center wouldn't be accountable to the community. Cooper countered, "This is locally owned." It would respond to patients' concerns about the high cost of surgical procedures and long waits to schedule them, she said.

The Office of the Health Care Advocate has raised concerns that surgeons affiliated with the for-profit center would refer patients with commercial insurance and simple ailments to the new facility and patients on Medicaid, which pays less, to hospitals.

"Our center is going to take all forms of insurance," Cooper said. "We have built free care into our operating plan. We don't expect there will be any cherry-picking."

As to Billings' worry that the center would lure more Franklin County residents south for surgery, Cooper said, "We are responding specifically to a need here in Chittenden County." Based on population projections and demographic trends, she argued that the demand for outpatient surgery in the Burlington area is sure to increase.

She added that in its application to purchase land in South Burlington, the University of Vermont Medical Center wrote: "Clinical capacity in the ambulatory care center has been reached — and in many areas exceeded."

Mike Noble, spokesman for UVM Medical Center, clarified that some services in its ambulatory care center on the main campus need more space, including dermatology. But at the Fanny Allen campus, where many more outpatient surgeries are performed, there is additonal capacity. In fact, "hours of operation at the Fanny Allen outpatient surgery center were recently reduced due to lack of ambulatory surgery cases," he said.

The review process is expected to run into spring. If approved, construction would take a year.

Billings at Northwestern Medical Center acknowledged that health care is evolving, but asked, "Does it really make sense to introduce a new player? That is the question for the Green Mountain Care Board to answer."

Prospective investor Dowhan suggested that if hospitals have to vie for patients with the new surgical center, it could be beneficial. "I think the competition makes both sides better," he said. "We need our hospitals, but there isn't any industry that continues to operate like we did 20 years ago."