Horror-Tinged 'Gretel & Hansel' Is Not Your Average Fairy-Tale Retelling 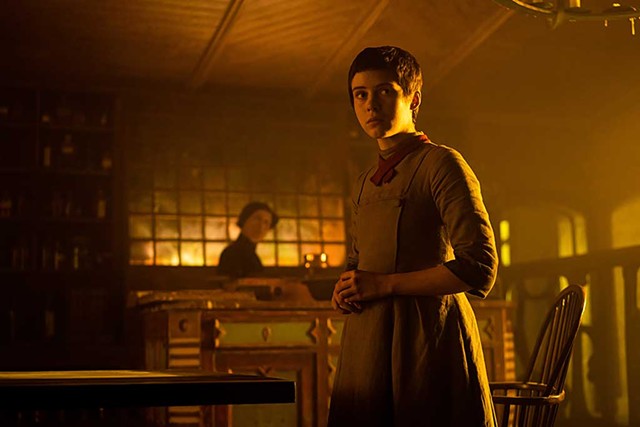 How do you smuggle a weirdo auteur movie into theaters these days? Release it over Super Bowl weekend and call it horror. Anyone who caught the previous two films from director Osgood Perkins (son of Psycho's Anthony Perkins) knows that, while his pedigree is appropriate, his brand of horror is not typical. I Am the Pretty Thing That Lives in the House (2016) riffs knowingly on midcentury gothic literature but barely even tries to make viewers jump. The Blackcoat's Daughter (2015) could be the world's most contemplative satanic possession movie. Their fans (a category that includes me) find them mesmerizing but not precisely scary.

Now Perkins brings us Gretel & Hansel, a film that may look more accessible. It's a PG-13 fairy-tale retelling that foregrounds the female protagonist, which means it's a coming-of-age fantasy for teenagers, right?

Not really. I can imagine certain teenagers being very into Gretel & Hansel, but it's likely to leave others bored and give still others nightmares. This is a fantasy with not much of a hero's journey, no snappy dialogue, no love interest and the scantest establishment of setting. A scene involving the eating of magic mushrooms evokes Alice in Wonderland, but Tim Burton's de-weirded Alice this is not. Featuring only a handful of characters and locations, Gretel & Hansel could almost be a stylized piece of avant-garde theater.

Gretel (Sophia Lillis) is a peasant trying to save herself and her kid brother (Samuel Leakey) from starvation in a grim, vaguely medieval-ish world. When she seeks employment with the local squire, he offers a leering quid pro quo. Cast out by their mother, Gretel and Hansel light out into the big, bad woods.

After various misadventures, they accept the hospitality of a crone named Holda (Alice Krige) whose table is always spread with a feast. Instead of a gingerbread house, she lives in an A-frame, which is enough to tell viewers of Midsommar that pagan magic is afoot. We all know what Holda is and why she's fattening up little Hansel. But, as Gretel reveals her own magical talent and becomes the witch's apprentice, the tale veers off in new directions.

With its hermetic world, lush forest imagery — fallen leaves seem to glow — and pulsing electronic score by Robin Coudert, the movie sometimes puts one in mind of Ridley Scott's very '80s fairy tale Legend. But Rob Hayes' script is so stylized that it suggests a translation from a ponderous work of 19th-century German romanticism. "From where does she conjure up this endless parade of cakes?" Gretel asks Hansel re: their hostess.

Lillis, who played Beverly in It, is an impressively natural young actress, but she struggles with a voice-over that explains too much when the film's images speak for themselves. Mirroring visuals — pointed hats and pointed roofs, obscenely glazed hams and slimy entrails — convey the fears of infanticide and cannibalism at the heart of the tale. In a world that defines female power as evil, this version asks, how can a parentless girl keep herself and her brother alive?

Gretel & Hansel is a trippy twist on Grimm that might have been more effective as a short than a feature, given its relative paucity of plot and world building. But it's bracing to see such an odd film on the big screen. And I defy any horror fan not to be horrified by the sight of Krige slowly, slowly tugging a child's blond pigtail out of her mouth.

The original print version of this article was headlined "Gretel & Hansel"