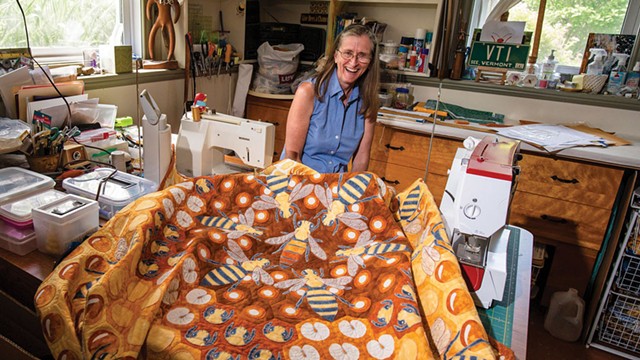 The life of a bee is similar to that of a Vermonter, according to quiltmaker Hope Johnson. A worker bee will undertake several tasks in succession: cleaning, gathering food, guarding the hive. Vermonters, too, are keen on multitasking. To underscore her point, she repeated a Green Mountain State mantra: "Moonlight in Vermont or starve."

Johnson, 62, is a bit of a moonlighter herself. In addition to making quilts and gardening at her home in Shelburne, she works at Red Wagon Plants in Hinesburg. Her interest in bees and their habits and habitats informs and inspires the quilts she designs. Johnson's award-winning works of fabric art use shapes, patterns, color and imagery to depict honeybees — the Vermont state insect.

"I'm like a sucker for symmetry," she said last week in her studio.

Johnson said that her quilts particularly appeal to beekeepers: They appreciate the detail and accuracy of her work, and they enjoy looking at the quilts in winter, when they can't see their hives. Beekeepers also recognize in Johnson's work a sense of stewardship and appreciation for nature — and they're drawn to the "power of the blankie."

"You can't outsource a blankie," Johnson said. "There's a sentimental side, the emotional connection of a quilt."

Johnson grew up in northern New Jersey, the fourth of five siblings whose parents were art teachers. She sewed and gardened with her mother from a young age and started making quilts in her twenties. She sewed wedding and baby quilts for friends and relatives; one day her father suggested she make a quilt for herself.

Johnson's bee theme emerged in a quilt-making class she took in the 1980s, when she worked on a sampler with a block that used a traditional pattern called "honeybee." It occurred to Johnson to join the pattern with scientific accuracy — using the correct proportions of hive size and bee anatomy. She read a book on her father's shelf, Amos Ives Root's The ABC and XYZ of Bee Culture, to learn more about the insects.

"I wanted to make bees, with hexagons, and try to represent the natural form of the hive — true to form," Johnson said. "And by doing that, that got beekeepers excited."

It took 25 years for Johnson to complete her first bee quilt. By then, it was 2009 and she was living in Shelburne with her husband, shoe designer Grant Urie.

Called "Honey, I'm Home," it won the Governor's Award for best Vermont quilt at the 2009 Vermont Quilt Festival. Johnson pieced, appliquéd and quilted the work by hand. Wings and pollen are hand-embroidered. The quilt, the first one Johnson sold, was purchased by a Chittenden County couple, Paul and Eileen Growald, as a gift to each other for their 28th wedding anniversary.

"We just loved it," Eileen said.

They love the quilt for its beauty and its connection to conservation, a longtime interest of the couple. Paul is a beekeeper who founded, in the mid-1990s, the Pollinator Partnership, a nonprofit conservation organization.

Every fall, the Growalds put "Honey, I'm Home" on their bed.

"It's such a work of art that I periodically feel pangs of guilt for using it as an everyday quilt," Paul said. 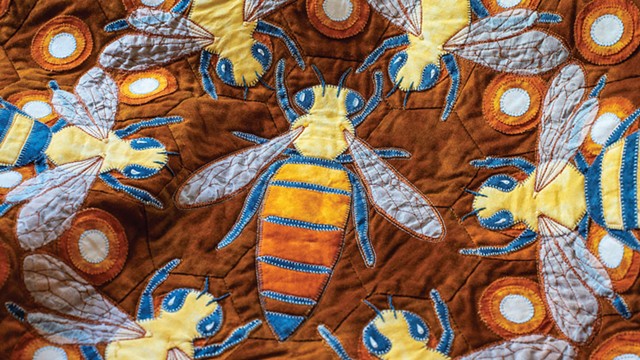 Johnson has crafted several other quilts that have garnered prizes at the annual festival, including a second Governor's Award for her stunning 2019 piece, "Kind of Blue." Centered on a honeycomb rendered in yellow and orange, it features six queen bees on navy hexagons. Her colorful 2018 piece, "The Bees' Needs," won the prize for best social justice quilt.

"The bees' needs are our own," Johnson explained later in an email. "Clean water, nutritious food and safe shelter in a community of mutual support."

Though she has a particular interest in symmetry and geometry, Johnson challenges herself by making quilts with figurative designs, as well. She's always at work on one of each simultaneously.

Just last week her figurative quilt, titled "Midnight Seamstress: A Sew-Sew Romance," was awarded a blue ribbon at the state quilt fest (held online this year). The humorous piece shows Johnson and Urie gazing at each other amorously, set against a pastoral landscape of lush trees and colorful mountains. An iron and sewing machine assume their rightful places in the scene; stitched text reads, "By day she was quilting in her studio, by night she was still quilting in her studio."

Johnson and Urie, who share ideas and offer a "second artist's eye" to each other's work, met in 1994 at Halvorson's Upstreet Café on Church Street when she was visiting from New Jersey. Johnson moved to Burlington the next year.

Her first project was to buy and renovate a Brookes Avenue Victorian, which she turned into Woodbury Guest House. Johnson ditched that business after a few years when she found that running a bed-and-breakfast "was a form of romanticized drudgery."

Johnson took a job as a gardener at Shelburne Museum, where she designed, installed and maintained the annual, perennial and heritage beds. One year, when the Big Apple Circus set up its tent on the grounds, Johnson used the voluminous elephant dung for her garden compost.

"The whole time," she said, "I was making quilts."

In 2012, Johnson displayed her bee-themed creations at the Eastern Apicultural Society convention, held that year at the University of Vermont Davis Center. Her items — including linens, handbags and greeting cards — sold out, and she was commissioned to make more.

Johnson's work had caught the eye of Bill Mares, a Burlington beekeeper and past president of the Vermont Beekeepers Association.

"I think that she has a really wonderful mixture of a fine graphic sense, a geometric feel, and she doesn't overly imagine the bees," Mares said. "She's not anthropomorphic about it. The designs are the real draw — but she still has the basic anatomy down pat."

Two years after that Burlington event, Johnson exhibited her work at an apiculture conference near Berea, Ky., considered the state's folk arts and crafts capital. The vendor area at the convention, she said, gave the beekeepers "a break from talking about mites."

The weeklong event included a square dance, for which Johnson dressed in her custom-made bee outfit; she won first place in the costume contest. Her prize was a pizza peel, which she put to immediate use playing air guitar at the dance.

"It's opened a world to me," Johnson said of the beekeeping events. "I love the learning. I love the connection. [Participants] give me ideas for quilts, and I'm helping them promote research and beekeeping."

Though Johnson limits the distance she'll travel to conventions, she donates a quilt to the apicultural society every year. Its sale raises funds for bee education. This meets two of the three criteria that drive her quilt making: charity and education. The third factor, Johnson added, is "my ego."

On her bed in Shelburne is a quilt Johnson completed at her former Burlington bed-and-breakfast. Made from her late father's madras shirts, it's patterned from shapes on a plastic bag he had gotten and admired on a shopping trip in New York City.

"My dad was a colorful guy," Johnson said, remembering the man who first suggested she make a quilt for herself.

The original print version of this article was headlined "Quilting Bees"