Hope, Expectations, and Our New President 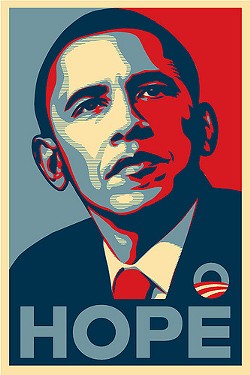 A week has passed since Barack Obama was elected our next president, and life has become... strange. Everyone is just so happy. Paranoid, angry political grumblings have given way to positively elated proclamations of our newly together nation and how great America is. Last night I heard the folk singer Nathan Moore talk about all of the songs he's written in the past eight years have to be thrown out because they're no longer applicable. The very fabric of our existence has been altered. The collective pants-shitting feeling of the Bush presidency has miraculously disappeared. It's pretty cool.

However, Barack Obama's momentous acceptance speech last Tuesday may have temporarily made me beam, but my cynicism is already setting back in. Chiefly, it's because I'm wondering how this poor guy is ever going to live up to the massive expectations we've all put upon him.

Let us not forget that Obama has, occasionally, said some hawkish things in regards to a military strike on Pakistan. When it comes to the Israeli/Palestine conflict, the president-elect appears that he'll hold the same always-pro-Israel line that our previous presidents have held. He's come out and said that he is not in favor of gay marriage, although he (mercifully) doesn't believe in banning it federally and is in favor of civil unions. Basically, Obama isn't and never was the shining beacon of progressive thinking that Vermont college students act like he is (and that neocon operatives tried to paint him as).

I'm really curious to see what will happen after a few months of an Obama presidency. Will all of those people who took to the streets chanting "OBAMA!" on Tuesday night go back into their usual role of playing the opposition, albeit a lot less frequently than was necessary against Bush? Will Obama's supporters remain enamored even as he becomes the leader, not the underdog? Will everyone stop watching The Daily Show?

I don't want it to seem like I don't like Obama. I do, I voted for him, and I'm excited to see what will become of our country under his leadership. I just hope that all of the talk about the "hope" that Obama represented during his campaign hasn't led to impossibly high expectations.

Because what will we have if our hope in President Obama turns out to be misplaced?