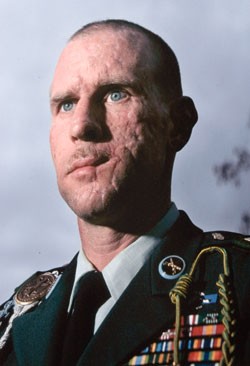 Don't ask me if MoveOn's Petraeus/"Betray-Us" advertisement in The New York Times was good for the left, the right, the president, the war, the country or the Jews. All I know is, it's a sure sign of the creeping militarism of a political culture when you can't insult a general without everybody leaping down your throat.

The instant the ad hit the stands and screens, the blogosphere and talk media were aflame with outrage. Four thousand emails poured into the Times, calling the lame schoolyard epithet despicable, disgraceful and treasonous. Congress — including 168 Democratic senators and representatives — voted to condemn "in the strongest possible terms" MoveOn's "personal attacks" on the general's honor, integrity and professionalism (Leahy and Welch voted yea; Sanders nay). Clark Hoyt, the Times' purportedly unbiased Public Editor, allowed that, had it been up to him, he would have asked for the deletion of "Betray Us," which he called "a particularly low blow when aimed at a soldier."

First off, calling a general a soldier is like calling Bill Gates a programmer. David Petraeus is the boss, and the Times got it right the first time: He is a public figure, representing the U.S. Armed Forces, U.S. foreign policy and the war in Iraq. This means that, whatever he may feel personally, he is not a private citizen; legally, he cannot be libeled. In fact, just like other generals prosecuting corrupt policies (Curtis LeMay, William Westmoreland, Augusto Pinochet and Idi Amin come to mind), Petraeus is precisely the guy to dis. If he comes back from the circle of hell that is Iraq and reports that things are looking up, he is either a fool (which he isn't) or a liar — the president's liar.

What struck me about this "blow," though, was its rarity. Far more typical these days is the other part of the Congressional resolution, which repeatedly recognizes, honors and respects "all members of the U.S. Armed Forces."

"Americans rightly admire our troops for their bravery, dedication and integrity. The Marines, for instance . . . epitomize the rectitude of America's soldiers," read one typical blog in Capitalism Magazine, an Ayn Randist website. A Sunday Times book review by Iraq vet/lawyer/writer Phillip Carter began: "It's hard not to like soldiers. The young men and women who make up our armed forces represent virtues we'd like to see more of in society: integrity, selfless service and loyalty to comrades and country . . . Spend enough time with them, particularly those serving in harm's way, and you will inevitably come home admiring them, and maybe envying them as well."

You don't have to be a free-market warrior or War on Terror cheerleader (as Carter seems to be) to harbor undying devotion to Our Men and Women in Uniform. Soldier-love is held up as an antiwar sentiment, too. This leads to an ever-escalating contest over which side is more faithful to the beloved. A couple of weeks ago, Rush Limbaugh impugned military personnel who oppose the war as "phony soldiers." Democratic Party Chair Howard Dean demanded he "immediately apologize to our brave men and women in uniform for undermining the sacrifices they make every day serving our country." Dean called Limbaugh's comments "un-American." To gild this red-white-and-blue lily, the Dems posted a 2005 video clip on their website — headlined "New Audio of Rush Limbaugh Viciously Smearing a Veteran" — in which Rush expressed his support for the troops by calling Marine Paul Hackett a "staff puke" who "tried to hide his liberalism behind a military uniform" when he ran for Congress as a Democrat.

Troop admiration is also a good disinfectant for memories of Hanoi Jane and rumors of Vietnam War protesters spitting on returning vets. Old peacenik Bernie Sanders has carved out a politically useful niche standing up for veterans' rights to compensation, health care, education and pensions. (By the way, sociologist and Vietnam veteran Jerry Lembcke put the spitting-on-soldiers myth to rest in 1998, when he combed every newspaper story, oral account and poll and found no evidence of spitting — except a few pro-war goobers aimed at protesters.)

Jim Currie, a professor at the National Defense University in Washington, D.C., summed up the love fest on National Public Radio: "The reality is, you're not going to find anybody today who'll say they don't support the troops." Currie noted that it means a lot to the men and women in country "to know the American people are behind them," to hear "we're with you, we support you, we honor you, we admire you."

OK, I'll say it. I don't "support the troops."  That is, I don't support them qua troops. I support them as people, just as I support — or rather, worry, grieve and rage on behalf of — the Iraqis: as people caught in a senseless, fruitless, apparently endless bloodletting.

But to speak of the virtues of soldiering is implicitly to ratify the values of militarism: that might leads to right. This helps perpetuate the war in Iraq, and all wars.

Being "with" the troops is not the same as honoring them. If I spent time with those Marines while they rousted cowering children from their beds at 4 a.m., I feel certain I would not admire or — of all things — envy them.

Part of me pities them. Does that sound patronizing? Read Walt Whitman's accounts of the Civil War — far more visceral frontline reportage than anything Wolf Blitzer could accomplish with a full camera crew. It is a combination of admiration, gratitude and, yes, pity:  ". . . all the men with this coating of murk and sweat and rain, now recoiling back, pouring over the Long Bridge — a horrible march of twenty miles, returning to Washington baffled, humiliated, panic-struck. Where are the vaunts, and the proud boasts with which you were sent forth? Where are your banners, and your bands of music, and your ropes to bring back your prisoners? Well, there isn't a band playing and there isn't a flag but clings ashamed and lank to its staff."

Pity was a fine form of sympathy for the hordes of working-class boys whose blood was siphoned into the collapsing veins of Europe's dying empires during World War I. And now, another dying empire chews the flesh of its own. Last month a Manhattan gallery exhibited Nina Berman's photos of wounded Iraq vets, taken in 2003. One of her subjects has no legs, one no face or ears; several have no expressions on the faces they have left. The pictures recall Otto Dix's drawings of hideously stitched-together World War I soldiers. Back then the chronic nightmare these survivors suffered was called "shell shock." Now it's "post-traumatic stress disorder." But in both sets of images, even the men decorated with medals look less like heroes than victims.

There's a difference, though, between World War I (and Vietnam) and the Iraq war. Then, the cannon fodder was drafted. Today's fighters volunteer. In fact, it is this distinction that inspires the most admiration in those who admire the troops. To me, it's the troubling part: They did not make the policy, they might not even understand the policy — who does, really? — but they have chosen to give their lives to it. There are other ways to serve your country, other ways to learn to fly a plane or earn a college scholarship. These men and women are not responsible for the war, but they are responsible for their part in it — even if they are only following orders. They have volunteered to follow orders.

There are some troops I admire: those who may have been duped into volunteering, joined the National Guard expecting to help in natural disasters, or even excitedly anticipated the adventure of battle, but who wake up in Baghdad or Falluja one morning and realize the whole thing is a crock and a crime — then desert or refuse another tour, or pour themselves into protesting the war. These are Rush Limbaugh's "phony soldiers." They are heroes to me.

I look at those Berman pictures and fervently wish our women and men in uniform to return home with limbs and sanity intact. But this wish does not translate into endorsing the values written in their sacrifice. Far from it: Their sacrifice is an obscene waste.