Cooking classes at Healthy Living teach couples to work together 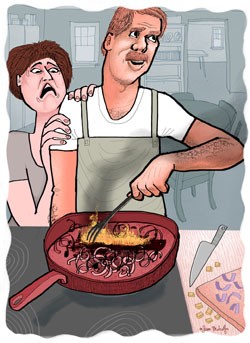 James and I have been together for more than seven years. Besides being hot, he’s the best friend I ever had. We share loves for everything from ethnogeography and Stephen Sondheim to professional wrestling and Street Fighter video games.

Of course, eating is a big part of our relationship. We generally dine out three or four times a week, and it’s still exciting for us every time.

But when we’re home, I do all the cooking. On occasions when I’ve traveled for work without him, James has survived entirely on Hungry Man dinners and muffins from Essex’s Bagel Market. His role, supposedly, is to do the dishes, but the stacks of silverware and Schlemmertopfs in our sink indicate the contrary.

When I discovered the couples’ cooking classes at the Healthy Living Learning Center, I thought I might be able to shock him out of his rut. So, last month, we signed up for a class with the particularly jarring title “Vegetarian Feast.” Regular Seven Days readers are familiar with my inhuman blood lust. But consider that, when James tried spaetzle for the first time, he declared it “so good I can’t believe it’s not meat.” This was going to be interesting.

As the Learning Center director at Healthy Living, Nina Lesser-Goldsmith has taught several cooking classes each month since the Learning Center’s bright and admirably organized educational kitchen opened at the end of 2009. Though she often works alone, the newlywed says she most enjoys cooking with her husband, Zach Minot. “He’s fun to cook with,” she says with a smile. The pair, both culinary school grads, collaborate on courses in fundamentals of professional cooking, but also make time every month to teach a couples’ cooking class.

Unfortunately, we didn’t get to see the lovebirds at work. Zach was hit hard with the flu the night of our class, so Nina’s brother and Healthy Living’s general manager, Eli Lesser-Goldsmith, filled in. “You see, you don’t have to bring your significant other,” Nina told the eight assembled attendees. “Any relationship will do.”

We started with a short wait for the final couple, who never showed up. Oh, well, more attention for the rest of us!

Of the four pairs assembled, only two people (both women) were vegetarians. The rest of the class was just there to be à deux. One of the vegetarians in attendance, Erynne Ross, had brought her husband, Matt Byrne, who admitted he didn’t cook at home — “unless you consider frozen French fries.” After 15 years of marriage, Ross was used to being her family’s chef, she said, but when she saw the listing for the class on Healthy Living’s website, she thought the evening would be a fun, romantic date without the kids.

The Lesser-Goldsmiths asked the class to assemble around the counter where Nina would demonstrate each of the dishes. First came a lesson in perfect pie pastry. As an experienced — dare I say adventurous — cook, I was not expecting to learn much in the class. However, Lesser-Goldsmith’s explanations of the science behind everything from flaky pastry crust to caramelization were illuminating. We would use both techniques to prepare a winter vegetable and goat cheese galette.

Back at our workstation, carefully outfitted with everything we’d need to prepare three courses, I left the pastry making to James. I’m a savory cook, not a baker, and I hoped he might be spurred to take on that role in our household. It appeared this might not be in the cards when, after a valiant struggle on his part, I ended up tying his apron for him.

Properly attired, James used a pastry cutter to mash two sticks of butter into two-and-half cups of pastry flour. That is, after a brief attempt at using his hands. Lesser-Goldsmith corrected him, saying he would overheat the dough. “Your hands are almost 100 degrees,” she explained.

His fingernails thoroughly crusted with flour and butter, James continued to mix the pastry to a loose consistency, as we’d been taught. If he did it right, he would leave pea-sized chunks of butter, which would melt while baking and make the crust flaky. Before he rolled it into a ball, I recommended he wash his hands.

The sink was right behind the demonstration counter, but it eluded him. “That’s a sink? Where are the dishes?” James asked when I pointed it out, only half joking.

With the crust balled up and ready to be refrigerated, Lesser-Goldsmith offered praise, “Very good pie crust for your first time,” she reassured him.

James was proud. His father, an accomplished home baker, has always considered pie crust something of an Achilles’ heel. With scientific culinary instruction on his side, James thought perhaps he’d “beat” Dad. However, he feared that he’d used up his beginner’s luck.

The class gathered around the counter for a demonstration of chopping the veggies for the galette. Jamie Oliver would have been saddened by James’ vegetable recognition. He couldn’t even identify a parsnip, though I love mashing them with butter and chicken stock every winter.

We shared chopping duties, and then I pan-roasted the carrot, butternut squash, parsnip and celeriac to a deep, caramelized brown, which James described as “Do-Do Brown” — after both poop and the urban comic and star of the 2001 bargain-bin classic Hell 2 Tha Naw.

While I finished with the veggies, James began rolling out the now-chilled crust. Lesser-Goldsmith explained to the class that a rustic tart like a galette could be imperfect, needing adjustments only “if you have Florida coming out of it.”

Florida-free, James’ crust inspired the instructor to enthuse, “You’re a great roller.” As we both giggled at the nursery-school-level encouragement, Lesser-Goldsmith explained, “You always have to tell your students when they’re doing well.”

I crumbled a whole 6-ounce log of Vermont Butter & Cheese Creamery goat cheese over the tart, then handed it off to Eli, who popped it in the oven. “Are we going to put it in the AGA for the beekeepers?” James asked in his best plummy “Two Fat Ladies” accent.

But the work wasn’t over. During our next lesson, using a mandoline to slice zucchini for a baked terrine, James became concerned. “I don’t imagine I’ll want to eat this,” he whispered to me.

We assembled the terrine in the porcelain dishes we’d been given to take home. Medallions of zucchini first, then caramelized onion and roasted red pepper. Another layer of zucchini and an ample helping of grated parmesan finished the dish.

While the baked dishes cooked, we threw together a salad of farro, dried cherries and walnuts in pomegranate-molasses vinaigrette. I started eating it immediately and couldn’t stop. I love my chewy grains. James doesn’t eat fruit and found it too tart.

He was much happier with the galette, of which he ate three pieces in quick succession. Even the terrine that had instilled such fear in him turned out to be at least somewhat to his liking.

What about the other couples? Over Indian pudding Lesser-Goldsmith had prepared before class, I asked Ross if the evening had lived up to her romantic expectations. Her answer was an emphatic “Yes!”

It was romantic for us, too, I guess. We always seem to be the bad kids who won’t shut up when we’re put in structured settings together, and this one was no different.

Fun as it was, I was hoping for lasting results. So far, progress has been slow. In the weeks since class, we’ve consumed the remainder of the galette. The second ball of dough we made that night lives on in our freezer.

James has expressed some interest in owning a mandoline in service of vague plans to make his dad’s pommes de terre au gratin recipe. “I’m looking forward to seeing what else I can ace on my first try,” he says, scarcely hiding his bravado.

Of course, the porcelain vessels from class are still in the sink, crusted in parmesan. In the event of a Pompeii-like catastrophe, an archaeologist will find them somewhere in the second strata of our dinner wreckage. “Once I get those ramekins cleaned, I’ll see if I can make potatoes nearly as tasty without the teacher there,” James says.

I think he’ll be all right. We’ll be doing it together.