Honey Road Team to Open a Brunch Spot, the Grey Jay, in Burlington Allison Gibson and Cara Chigazola Tobin have dreamed of owning a brunch spot since they opened Honey Road in 2017. This spring, they'll finally have one.

The co-owners are targeting a May opening for the Grey Jay at 135 Pearl Street in Burlington.

“It’s not just your classic eggs and toast,” executive chef/co-owner Chigazola Tobin said of Honey Road's new sister restaurant. "It’s the flavors that Honey Road is known for incorporated into breakfast dishes, but it’s also breakfast like it’s done in the eastern Mediterranean.”

Honey Road’s occasional brunches were a testing ground for the pair’s inevitable expansion — “even years in advance,” Chigazola Tobin said. “Honey Road is a nighttime place. It’s sparkly and special. We didn’t want to incorporate anything else into it.” The Grey Jay, she said, “is going to feel like a daytime place.” 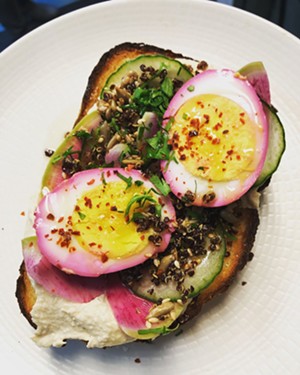 Amanda Wildermuth will oversee the pastry department at the Grey Jay in addition to her role as pastry chef at Honey Road. She’ll offer a daily doughnut — in smaller quantities than the hundreds she made on weekends for Honey Road’s pandemic takeout window — and occasional boxes with expanded flavors for preorder.

Honey Road’s assistant general manager/wine buyer Dana Parseliti will manage the front of the house at the Grey Jay.

The building near the top block of Church Street was most recently Lion Turtle Tea. Before that, it was a Papa John's. The building was also the longtime home of the popular nightclub 135 Pearl.

Taking over a beloved space is nothing new for Gibson and Chigazola Tobin. Honey Road diners often share stories from when the restaurant on the corner of Church Street was Smokejacks — including Gibson, who met her husband there while working as a server.

“Now, with this space, it was Pearl’s,” Chigazola Tobin said. “And everybody remembers Pearl’s. It just feels right.”

The space is currently under construction to “get rid of the Papa John’s tile,” Chigazola Tobin said. The result will be a bright yet cozy space that makes the most of the building’s big windows.

The full-service dining room will hold roughly 30 seats, and the Grey Jay will also offer takeout via online ordering. It plans to be open 9 a.m. to 3 p.m., Thursday through Monday, with industry brunch on Mondays.

Chigazola Tobin is a birder, and the grey jay — also called the Canada jay — is her favorite bird. “They’re really curious and friendly,” she said. “That really spoke to the vibe of what we want this place to be: It’s brunch, but it’s a little different.”