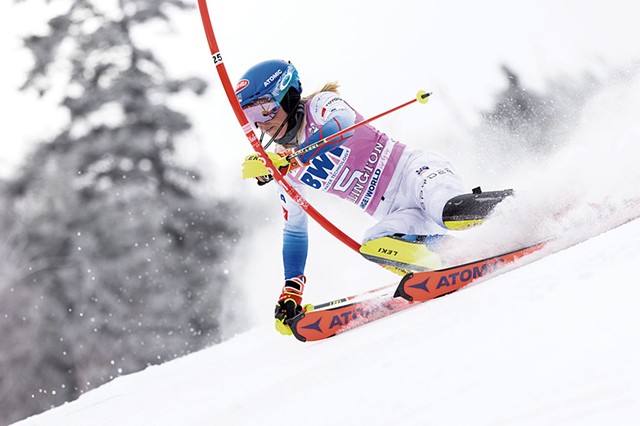 "This is not 'hero snow,'" Tina Weirather said as she gazed out the window on Saturday at a grayish curtain of freezing fog hiding a ski slope. "This is the opposite of hero snow."

Weirather was surveying the Superstar race course at the Killington Resort ski complex where, in an hour, the FIS Alpine Ski World Cup women's giant slalom was to kick off its fifth iteration at the famed Vermont venue; COVID-19 canceled it last year.

Following weeks of moderate temperatures and rain but no frozen stuff, a steady dumping of plump snowflakes had begun the previous afternoon. Unlike mortals, who pray for powder, the pros want icy hardpan, slick as a carnival barker. Now, lingering flurries whipped furiously in 25-mile-per-hour gusts, pillow-topping the once-pristine track.

Officials delayed the start time in hopes that the wicked wind would diminish.

Weirather, a former ski racer herself, enjoyed hero snow in her native Liechtenstein when "it's really cold and dry, and the snow crystals form tiny balls that grip the skis, and you can go really fast and barely leave tracks." After 15 years on the World Cup circuit — known by its followers as the "White Circus"— the 32-year-old daughter of ski racers covers the sport for Swiss television.

"Maybe you know my mother," she said, when I mentioned covering Alpine racing at the Winter Olympics at Lake Placid, N.Y., in 1980, and Sarajevo in 1984. At Lake Placid, her mom, Hanni Wenzel, won gold medals — Liechtenstein's first — in the giant slalom and slalom; she got silver in the downhill.

Weirather peered out the window again. "They may have to cancel."

Cancel was a four-letter word in Mike Solimano's lexicon. Killington's president had labored for weeks to get the course prepared; he directed 120 snowmaking guns to be spaced every 18 feet to cover the 4,800-foot run with five feet of snow. In yet another plague year, he decided to limit daily attendance to 8,000 spectators a day on Saturday and Sunday — half the typical turnout and well below the record 19,500 who showed up on a Saturday in 2019, briefly making Killington Vermont's third-largest city.

Solimano thought that this would allow a reasonable chance at social distancing. Instead of free admission, he'd charged $5, hoping it would help limit attendance and also benefit a local ski foundation. Solimano knew that this wasn't just about bragging rights for the self-styled Beast of the East. State officials told him that visitors pumped $6 million into Vermont's economy during the 2018 World Cup.

At 9:45 a.m., a Jumbotron lit up with the first skier plummeting down the run, triggering a cowbell cacophony. tweet this

Overnight Friday and into Saturday, Killington crews swarmed the Superstar track to make it suitable for racing. Hundreds of so-called "slippers" — many recruited from local ski clubs — literally slid down the track's 1,200-foot vertical drop on their skis to remove loose snow and massage it into form.

At 9:30 a.m., members of the international ski federation inspected the course and pronounced it worthy, but they also took the cautionary step of shortening the run, eliminating the first eight gates of the giant slalom. More than 100 competitors from 20 different countries, at least double the normal turnout, were on hand to attempt to rack up qualifying points for the Winter Olympics in February. Shortening the course turned a tactical run into a hell-bent sprint.

With the delay, spectators flooded into the "village," a makeshift outdoor mall with kiosks selling everything from T-shirts to tires. They scooped up freebie miniature cowbells — the noisemakers of choice on the ski-racing circuit — and queued for raffles and waffles. It was colder than a repossessor's heart, forcing fans inside the K-1 Lodge, where social distancing was gone with the icy wind. Many sported puffy jackets emblazoned with the names of hometown ski clubs. My Patagonia became a panini.

The Wallace family had driven five hours from Pittston in northeastern Pennsylvania so that 13-year-old Audriana, who skis for the Montage Mountain club, could see her first World Cup race and root for ski racing's GOAT in the making, Mikaela Shiffrin.

Shiffrin has never finished second in any race at Killington, bolstering her precocious total of 70 wins in slalom and giant slalom, and leaving her one shy of sainted Swede Ingemar Stenmark's record 46 victories in a single discipline. Vermont claims Shiffrin as a hometown hero because the Colorado native moved to New Hampshire when she was 8 and enrolled at Burke Mountain Academy in the Northeast Kingdom in middle school. The academy is to ski racing what Hogwarts is to wizardry. Teammate Nina O'Brien is also a "Burkie." A third US Ski Team member, Paula Moltzan, skied for the University of Vermont and won the NCAA title as a first-year.

Shiffrin's earliest ski memories of Killington include skiing with her mother and gorging at the waffle truck, she told reporters before the event. Last year was her annus horribilis, marked by the untimely death of her father, Jeff, which, coupled with pandemic fears, led to a fractured schedule. Shiffrin remarked on a relatively injury-free career, despite a recent back injury, and added in wavering tones, "There's no cure for a broken heart." Her introspection went deeper. "The pressure seems crippling at times. I don't know how well I handle it. I get into this mentality that I have to win; people expect me to win. It feels very lonely. I'd like to set aside the vanity that you're supposed to win."

Shiffrin had seemed invincible until the pandemic and personal loss intervened. She began this season with a notable giant slalom win in Austria, then finished second twice in Finland to a suddenly invigorated Petra Vlhova of Slovakia. 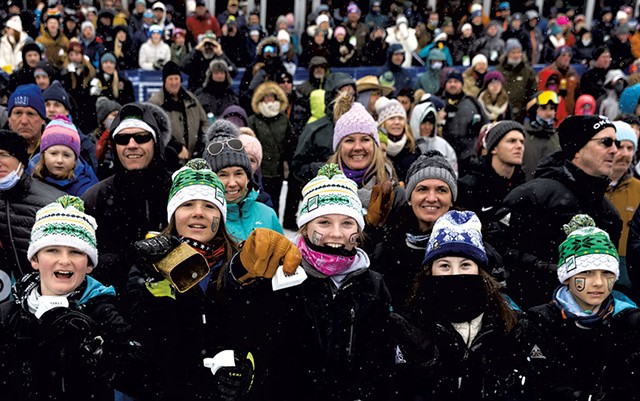 As Saturday's giant slalom kicked off, Vlhova, enveloped in a swirling fog, managed a reasonably fast run. Shiffrin completed a mediocre run, sliding at one pitch on skis that chattered. After nine women had finished, officials called a time-out, reexamined the course and conditions, and waved a flag of surrender. No giant slalom this year.

Shiffrin appeared relieved as she gave an interview on television, holding her Atomic skis in perfect product placement. "I couldn't see anything," she said, almost giddily.

Game over, nobody wanted to linger. Later, the organizers offered to refund the $5 admission.

By Sunday, when spectators and skiers returned for the slalom, conditions had changed considerably. It was clear, with temperatures in the teens, the wind just a whisper. No need for Saturday's crystal math; the course was hard but not smooth.

At 9:45 a.m., a Jumbotron lit up with the first skier plummeting down the run, triggering a cowbell cacophony. Fans jammed the corral at the bottom, yards from the finish line. They cheered raucously for each racer.

Shiffrin, skiing fifth, finished behind the leader, Vlhova, by two-tenths of a second — the time it takes to bat your eyes.

By the time the second, decisive runs started, it was snowing and the taut course softened as if it had been microwaved. The 30 fastest skiers went off in reverse order. The course ran fast in some places but bumpy in others, and two skiers wiped out. Moltzan had a great run as 30 family members and hundreds of friends watched, and she finished seventh overall.

Conditions were deteriorating as Shiffrin prepared to ski, next to last. She jumped out of the starting hut, slipped, recovered and swiveled through the gates like a whirling dervish. When she hit the finish line, she had bested her first run by nearly a second, which put her ahead of Vlhova. More cowbell.

The Slovakian moved into ready position and stared down the course, Shiffrin's time staring back from a scoreboard. She started well but caught a ski edge, losing her balance and precious milliseconds. Shiffrin claimed a winning margin of more than seven-tenths of a second.

Following the postrace awards ceremony, Shiffrin, elated and emotional, contemplated a reporter's assertion that she had "wanted" it more. She pushed that notion aside.

"I had to focus on the things that actually make me a fast skier and not focus on how much I wanted to win," she explained. "Your will to win is not what gets you down the course."

Killington was hers once more. There was no hero snow, but there was a snow hero.