Homeless Vermonters Are Having Trouble Getting Their Federal Stimulus Checks 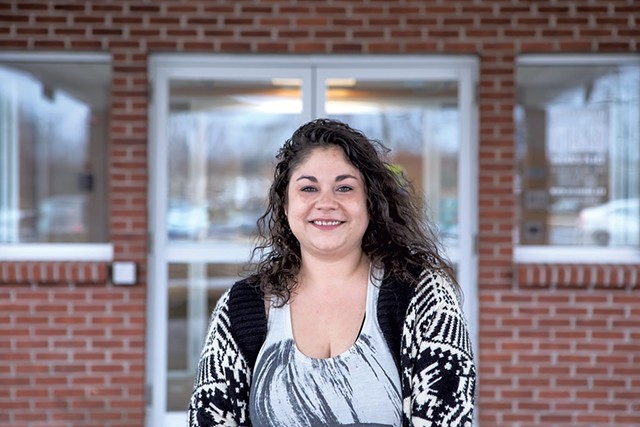 Kari Rios once had everything she needed: an apartment, a well-paying job, a reliable car. As a single mother, she had some long days. But those pillars of stability made her feel that nothing could stop her.

"I was on top of the world," she recalled.

Then, in early 2017, her son's father stopped paying child support. Suddenly her nursing assistant salary was no longer enough — for the $1,249 rent, and the gas, and the heat, and the groceries. The bills piled up until the only thing that felt unstoppable was her descent.

A procession of painful goodbyes followed. She lost her South Burlington apartment, then her job and finally her car, selling it for $2,000 and using some of the money to pay for a taxi ride to her mother's home in New York State, one of half a dozen places she and her son, now 11, have lived over the last three years.

Their tailspin eventually landed them in a Burlington homeless shelter, where they stayed until receiving a spot in a CARES Act voucher program that allows them to afford a two-bedroom apartment at a former Essex motel. Rios applies a third of her $500 monthly stipend from a different state benefits program for low-income parents toward the rent, while federal funds cover the rest.

"I'm just keeping my head high and doing what I can," Rios, 35, said last week, "because this is my place. I got a second chance, and I'm gonna take advantage of it."

Some extra money would go a long way toward getting Rios back on her feet. But unlike millions of Americans who have received as many as three direct payments from the federal government in the last year for pandemic relief, Rios has yet to get a single stimulus check. That's because the feds use information from recent tax filings to send out the payments, a process that can miss people such as Rios, who has not had to file taxes in recent years because of her low income.

"I worry that some of the most vulnerable people ... who could really use that money aren't going to get it." Marcus Chiaretto tweet this

Even those who have managed to get on the government's radar have sometimes struggled to claim the money, often because they lack a bank account or permanent address. And while service providers say they have helped many people overcome these barriers, no one knows what percentage of Vermont's homeless may still be waiting for checks — or missing them altogether. None of the half dozen homeless people Seven Days interviewed for this story had received any stimulus cash.

"This isn't a very elegant system," said Marcus Chiaretto, a case worker at the Community Health Centers of Burlington. "I worry that some of the most vulnerable people ... who could really use that money aren't going to get it."

During the coronavirus pandemic, Vermont has tried to ensure that people experiencing homelessness have a safe, socially distanced place to stay. Last spring, the state expanded its own voucher program that provides housing-insecure people with hotel and motel rooms. More than $37 million in federal relief aid has now been spent on the program, helping to house roughly 5,200 people over the last year.

The state has taken a more hands-off approach when it comes to the federal stimulus checks, however. A spokesperson for the Department for Children and Families said the state has provided service agencies with general information and advice, but it's up to the agencies to help people actually claim the money.

The process often begins by checking in with people at homeless shelters or voucher program motels — or sometimes meeting them on the street — to determine who may still be waiting for the payments. Outreach specialists then work to "eliminate any barriers that come up," said Sophia Senning, coordinator of the Housing Resource Center at the Committee on Temporary Shelter, or COTS.

A lack of tax history has been the most frequent obstacle. The specialists say the vast majority of their clients have not needed to file taxes for at least the last few years because of their low income. The Internal Revenue Service sought to address this problem by creating a "non-filers tool" last year, but it has since been deactivated. The IRS says people who received previous checks using that tool will likely receive the latest one, too. But others will need to file tax returns to get the money.

That can be easier said than done. While the IRS sponsors a pair of free tax-filing programs, the pandemic has closed many locations. The ones that are open have been inundated. The largest such program, run by a division of the Champlain Valley Office of Economic Opportunity, is now completely booked through April 15. The IRS has extended the tax filing deadline by a month, but CVOEO says it does not have the staffing or financial capacity to run the program past the original date.

Free online services can also pose challenges. Some homeless people don't have reliable internet access, and those who do sometimes find the online services prohibitively confusing. "It's part of my job to help, and I still find it pretty complicated," said Chiaretto.

People who clear the tax hurdle must then find a way to receive the money, another surprisingly complicated task. The IRS has funneled payments directly into the bank accounts of people who file tax returns with direct deposit information; others have gotten paper checks or prepaid debit cards. But those must be sent to a permanent address, which can be a problem for people who frequently move, or for people fleeing unstable home situations.

In other cases, people over age 18 were still being counted as dependents long after they had become estranged from their caregivers. "Most of the youth we're working with have tumultuous relationships with their family or have been in and out of [Department for Children and Families] custody," said Christina Brown, manager of the Basic Needs Program at Spectrum Youth & Family Services. "There was really no workaround to getting them the money."

Spectrum worked to help clients open bank accounts and update their addresses with the IRS after the first round of stimulus payments last year. Many of those clients had better luck with the second round of checks and now expect to receive the latest one, Brown said.

It's hard to tell how successful the outreach efforts have been statewide, as no one knows for certain how many of the estimated 300,000-plus people eligible for stimulus checks in Vermont are homeless.

Heather Bush, coordinator for ANEW Place's low-barrier shelter, said the "vast majority" of the 25 or so people staying there expect to receive the latest payments, while case manager Caroline Trevarrow said at least eight of the 14 staying at the organization's 24-hour shelter on North Street do, as well.

Still, some fear that the agencies won't be able to help everyone, no matter how hard they try. Stephen Marshall, a Burlington homeless advocate, said some people just "don't want to participate" with the "system," and so the tax filing requirement alone could prevent some from getting the checks. After years of living on the margins, "they grow very cynical," Marshall said, and some just "give up on the idea that they're entitled to anything."

He said state and federal government should have devised a way for one central agency to deliver the payments directly to homeless people. "If there's anybody in the entire country that could use that money, it's [them]," he said.

Outreach specialists agree that stimulus checks are likely not enough to help someone secure permanent housing, particularly in Chittenden County. But they say the benefits can be a first step in that direction — and can often help change someone's outlook.

"Maybe that could be the difference in feeling like they could wake up and go get a job that day," Brown said, "because they had the clothes they wanted to wear and they ate the food they wanted to eat — that they were able to take control of certain things."

The desire for control was a binding thread through conversations Seven Days had last week with people experiencing housing insecurity.

Jordan Orcutt, 27, was spending much of last Thursday attempting to fix a broken radiator at a makeshift car garage set up at a Burlington homeless encampment off Sears Lane.

Orcutt said he applied for the stimulus last year using the non-filer tool but was told he was still being claimed as a dependent, even though he's crashing at a friend's apartment on Pearl Street. Were he to receive the latest check, his top priority would be to find another apartment with his friend. "The lease is supposed to be up, but because of COVID, he hasn't been kicked out," Orcutt said, oil staining his hands and forearms. "That's weighing on us pretty hard."

Another man at the same encampment who declined to provide his name said he wasn't aware that he even qualified for the stimulus payments. He said he planned to look into it and imagined putting the money toward a new car or a place to live.

"Just something to better my life," he said.

That same afternoon, Rios, the single mother in Essex, watched her son bike loops around the parking lot and thought of how she would spend the money. She recently opened a bank account and has been working with the motel's housing coordinator to file her taxes.

A car also tops her list. "I want to be independent," she said. She envisioned doing the mundane errands people so often take for granted: "Go to the grocery store, go and pay my bills, send some packages, go in and buy nails and tools for my apartment."

"That would change my life a lot," she said.