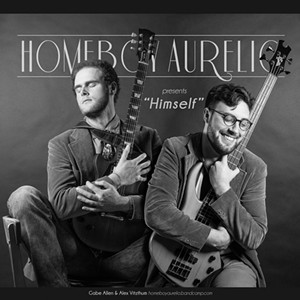 When last we heard from former opera student Alex Vitzthum in early 2017, he was making synth-forward electronic music strangely partnered with a smattering of Gregorian chanting under the name Clam. His unexpected pairing of styles resulted in a charming yet esoteric record called Sonnendruck.

Shortly after releasing it, the Vermont native began cowriting as Homeboy Aurelio with guitarist/bassist Gabe Allen. The pair's tunes veer drastically from Vitzthum's mix-and-match Sonnendruck project into streamlined, sun-dappled indie rock. Occasionally reminiscent of West Coast outfits such as the Neighbourhood and Cayucas, the duo adorns its summery sounds with woozy harmonies, jazz-informed chord progressions and percussive patterns, and nods to '90s alternative. Still a bit on the bookish side, the new tunes are much more digestible than Sonnendruck's challenging fare.

After "Intro Song (Mood)," a brief, sketch-like opener, "DWB" establishes one of the album's best qualities: In many ways, Homeboy Aurelio's tunes are all hook. The songs largely shrug off traditional verse-chorus-verse-chorus patterns, yet structurally they feel more customary than experimental or avant-garde. They seem to move through a series of peppy, engagingly melodic and highly memorable sections — some of which do repeat, as is expected in pop-rock music. But when you examine the tracks more closely, they're anything but typical.

Seemingly a song about looking back on a relationship's end, "Indian Summer" is a lust-filled fever dream that subtly devolves into uncertainty. Its balmy, soulful verses arrive at rough-hewn climaxes.

"Growing Pains" recalls late '90s alt-rock with brash, arpeggiated riffs and blasé vocals. Unwieldy bar chords punctuate the song's puerile chorus. The pain and poor choices of youth are aptly captured as the pair repeatedly yowls, "Where has the time gone?" and "Naked on the lawn!"

As Homeboy Aurelio, Vitzthum and Allen prove a winning combination. On their first joint venture, their outside-the-box indie rock is fresh and memorable and rarely disappoints.

Himself is available at homeboyaurelio.bandcamp.com.

Speaking of Homeboy Aurelio, Himself