Home on the Range: Radish-Top Pesto

Growing radishes has given me a false sense of confidence in my gardening skills. I was one of those Vermonters outside in mid-April, bundled up and digging in the dirt. Most good advice was telling me to stay inside while the ground warmed up, but instead of listening, I planted an entire seed packet of French breakfast radishes on April freaking 19th. 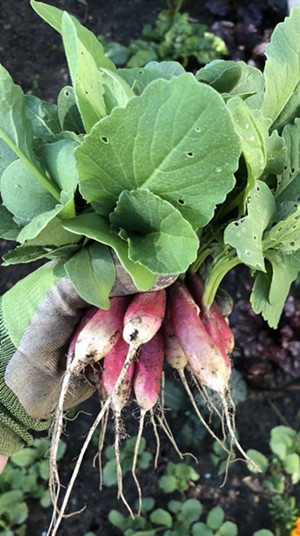 Radishes were my most successful crop last summer, too. Those didn't make it into the ground until mid-July, when I was finally settled back in Vermont after six years of failing to grow anything but mint on fire escapes in Brooklyn.

Between these two questionably timed plantings, the spicy early risers have my thumbs feeling rather green (as long as I don't look too closely at whatever's going on with my beets).

To keep up with the radishes as they poke their pink shoulders out of the soil, I've been eating lots of salads and buying butter in bulk. One of the raddest things about radishes, though, is that their green tops are edible, too. And, yikes, do I have a lot of greens.

When I have an overwhelming bounty of any semi-sturdy green, I tend to ask myself, Will it pesto? In the case of radish tops, the answer is "It sure will."

I like to keep my radish-top pesto light and lemony. The result has a vegetal greenness that pairs nicely with other delicate spring flavors. I've used it as a base for an ad-hoc asparagus-radish tart (see serving suggestion, below), as a spread for sandwiches, and as a topping on an experimental pizza with grilled asparagus from Pomykala Farm and squeaky cheese curds from Sweet Rowen Farmstead. 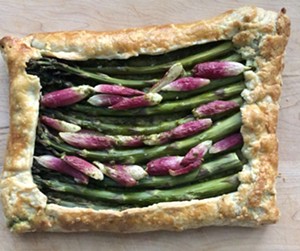 This is a flexible — and storable — recipe. It would work as a pasta sauce or in a potato salad. The ingredients, too, can be dealer's choice. No sunflower seeds? Try pine nuts, walnuts or almonds. Want to make it vegan? Leave out the parmesan. Feeling wild? Add garlic or ramps. It keeps well in the fridge for a couple weeks, and can be frozen if you want to revisit the taste of spring throughout the year.

And, much like growing radishes, throwing pesto ingredients in a blender and whizzing them all together is easy, satisfying, and a real confidence booster.

Ingredients
Directions
Serving suggestion: To prepare an asparagus-radish tart, roll out pie dough into a rough rectangle. Spread radish-top pesto in an even layer over the dough, stopping an inch from the edge. Place asparagus stalks and halved radishes in alternating rows (pretty!) on top of the pesto and drizzle with olive oil, salt and pepper. Fold the edges of the dough over, brush with egg wash and bake in a preheated 400-degree oven until the crust is golden brown, about 30 to 40 minutes. Serve with a crumble of goat cheese on top.