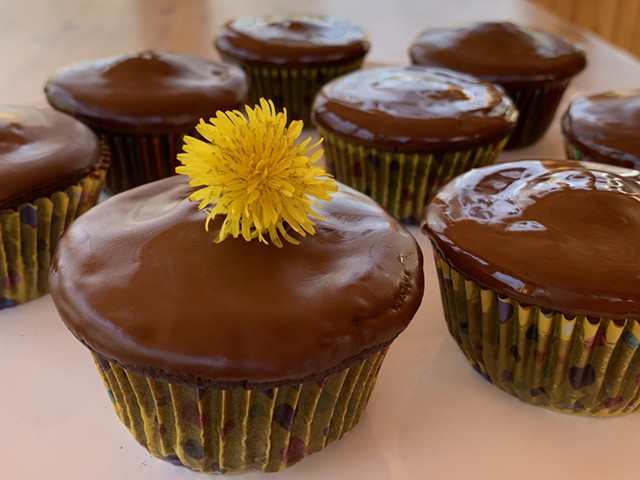 I cannot count the number of times I've made these cupcakes over the last five years since their creator, Nancy Cain, told me it was the single recipe in her then-new cookbook I should try if I only tried one.

I will admit I was skeptical. Not only were they gluten-free, as was everything in Cain's cookbook, Against the Grain: Extraordinary Gluten-Free Recipes Made from Real, All-Natural Ingredients, but I had  recently experienced full-on disaster with another baking recipe (not Cain's) featuring the same gluten-replacing ingredient.

But I had promised I would give them a try, and when I did I was floored. With just six simple ingredients that many people will have on hand (even in a pandemic), this is the best and easiest chocolate cupcake recipe I've ever baked.

Nancy Cain and her husband, Tom, cofounded Against the Grain Gourmet, a gluten-free baked-goods company, in Brattleboro in 2006. Tom and one of their sons had been diagnosed with celiac disease; Nancy, a scientist by training, approached recipe development for her family with that rigorous approach.

"I'm very good at holding variables constant," she told me back then.

Nancy has always prided herself on recipes that feature whole ingredients, no funny business. This is a case in point: You literally just blend the ingredients in a food processor, scrape the batter into the pan, and turn out moist, fine-crumbed chocolate cupcakes.

I've since made the recipe as both cupcakes and as a whole cake for birthdays, team dinners and graduations; for preschoolers, teenagers and octogenarians. It is beloved by all, and I think only one person has ever guessed the secret ingredient on their first try. (No, I'm not going to tell you, but the recipe is below!)

As noted, the recipe is gluten-free (i.e., no flour required) and also dairy-free. That means it can deliver more joy to more people, but I make it even for gatherings without dietary considerations because it's so good.

The original recipe calls for a white-chocolate-lavender icing, but I make a simple chocolate glaze instead. Then I garnish with whatever fresh berries or edible flowers are in season.

The cupcakes pictured here were made a couple weeks ago and garnished with dandelions from my (unsprayed) lawn for a birthday girl who appreciates wild edibles. The cake version was made for another birthday and  decorated with some gorgeous, professionally grown blooms. Each brought a lot of joy.

For cupcakes:
For glaze: Directions

Note: A friend tried to make them egg-free (using flax egg as a sub) and that did not work. I have successfully made the recipe, doubled, as a 9-by-13-inch cake and a 12-inch round. Both take about 40 minutes to bake. Double the glaze.

Source: adapted from Against the Grain: Extraordinary Gluten-Free Recipes Made from Real, All-Natural Ingredients by Nancy Cain (Clarkson Potter, 2015).