Beyond iconic dishes like Evil Jungle Prince curry redolent of coconut and kaffir limes leaves, the restaurant was known for jazz memorabilia, dim sum brunch and the outsize personality of co-owner Jerry Weinberg.

Weinberg and his business partner (and ex-wife) Ginger Hobbs sold their restaurant in late 2006 to Samuel Palmisano. Shortly thereafter, Five Spice was gutted by a devastating fire and Palmisano decided to move on to start his own Italian restaurant, Pulcinella's in South Burlington.

Weinberg passed away in January 2019. For several years before that, Weinberg and Hobbs' daughter, Cheryl Herrick of Burlington, worked with her dad to occasionally stir up batches of some of the restaurant's signature sauces for sale under the label Dragon and Daughter.

Other than that, fans were out of luck — until now.

A new blog Five Spice Café: Recipes from the Vault, launched last month to help those who still crave their Five Spice favorites and are willing to tackle the recipes in their own kitchens.

John Canning, a longtime fan and friend of the Five Spice family, has been adding recipes gradually from a box of several hundred that survived the fire.
"The goal is to put the recipes into the public domain, so that people can enjoy them!" Canning wrote in an email.

(Canning spins a funny tale about winning the recipes from Palmisano in a game of strip poker. He admitted that was not exactly how it happened, but rather a nod to Weinberg's sense of humor.)

Like many restaurant recipes, the ingredients, quantities and professional kitchen shorthand do not always translate easily for home cooks.

With the assistance of Hobbs, Herrick, Palmisano and former Five Spice staff, Canning has been working his way through the recipes to make them accessible for all.

"It took quite a bit of trial and error to figure out how many cups of mushrooms were really in a 'bucket,'" Canning said, referring to the recipe for Siu Mai dumplings made with pork, shrimp and Chinese mushrooms and "secret spices," which turned out to be peanut butter.

Of those posted so far, Canning said, the Southeast Asian chicken curry and sesame peanut noodles have been the most popular. Five Spice fritters and Siu Mai are close behind.

"My mom and I are delighted, if quite nostalgic, about the recipes [being shared]," Herrick wrote in an email.

Many have quirky details , she said, like the  fritters, which call for French rolls in the written recipe. For the restaurant, she divulged, "Mike Williams of Kountry Kart [Deli] gave us the bread ends from sandwich-making."

Herrick did concede that it feels a little 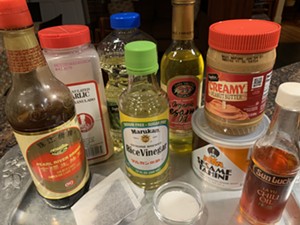 weird to see the recipes her father guarded so closely go out into the world. But, she said, she and Hobbs are "very glad to get more people more happy with access to delicious food."

Directions
Note: This is the version on the recipe card, though Ginger Hobbs notes that Jerry Weinberg used red wine vinegar rather than rice wine vinegar, and chopped fresh garlic instead of granulated garlic. Also, he omitted the chili oil, so that customers could add hot sauce to taste.