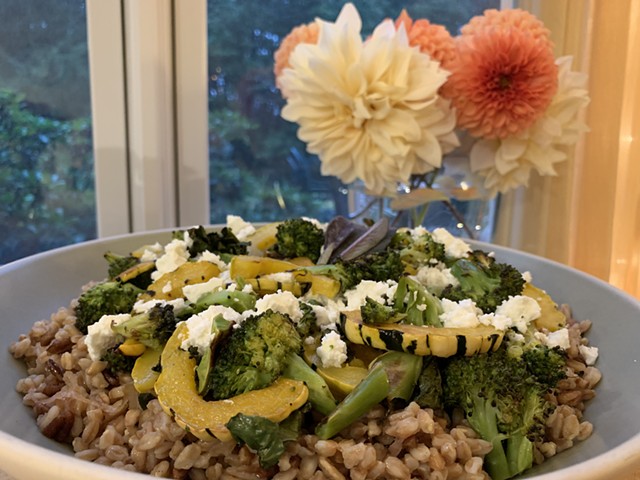 Meal planning can be a creative challenge but it can also be a chore. Sometimes I'm lucky and the universe tells me what to make for dinner.

Most recently that occurred when the universe sent me several messages over the course of a few days.


First, I interviewed acclaimed author Jonathan Safran Foer about his most recent book, We are the Weather: Saving the Planet Begins at Breakfast, in advance of his University of Vermont George D. Aiken Lecture on October 8.

Among the things Foer and I discussed were what he had eaten for breakfast: nothing, because he doesn't eat breakfast, making his book subtitle a tad disingenuous.

Seven Questions for Jonathan Safran Foer in Advance of UVM Talk on Diet and the Climate Crisis
By Melissa Pasanen
Food + Drink Features
I also asked him what he had eaten for dinner the preceding night: spinach and herb pie with roasted potatoes and farro. After being impressed by his complete disregard for the low-carb frenzy, I thought, Hmmm ... farro. I haven't made that lately.

Scrolling through Instagram a few days later, my eye landed on a beautiful photo from Farmhouse Pottery in Woodstock of a farro salad with roasted butternut squash and sage-brown butter dressing. Hmmm... farro. I haven't made that lately, I mused again.

The recipe called for 2 cups of farro and it turned out that was exactly the amount I had left in my larder. I also happened to have delicata squash from my CSA share and plenty of sage in my garden.

We've been trying to eat a few more plant-centric meals each week. You can't really argue with eating more vegetables and whole grains. There's also the point Foer makes forcefully in his book: Americans in general eat too much meat, and industrial livestock farming has contributed significantly to the climate crisis.

But who am I kidding? It was all about the brown butter.


I built on the Farmhouse Pottery recipe by adding roasted broccoli along with the squash and also stirring some sherry vinegar into the brown butter, shallot, maple and sage dressing for acidity and balance.

The nutty, chewy farro cooked in about 30 minutes, about the time it took for the squash and broccoli to caramelize nicely in a hot oven. While those cooked, I sliced up shallots, picked the sage leaves and made the warm dressing on the stovetop. It all went in a big bowl with toasted pecans and a scattering of Vermont goat feta.

Thank you, Jonathan Safran Foer, Farmhouse Pottery and the universe.

Serves 4-6 as a main course