Home on the Range: A Latke by Any Other Name 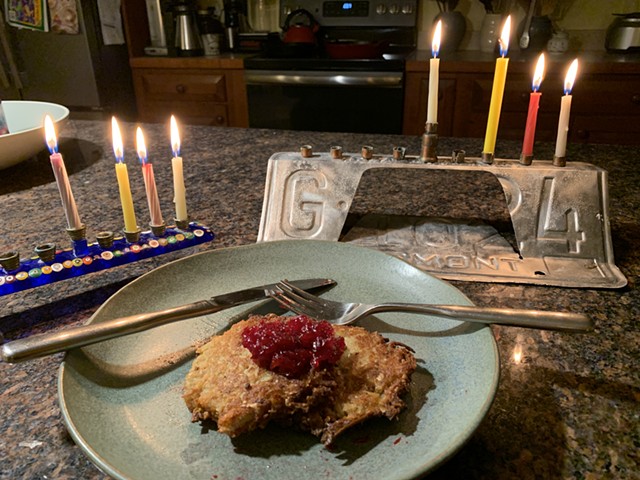 Wade, who is now making knives and cooking on Martha's Vineyard, wowed Nathan during brunch earlier this year at the Outermost Inn.  The experience produced an epiphany for Nathan, which she detailed in an article entitled, "A Genius Method for Making Latkes."

Fried shredded-potato pancakes called latkes are an Eastern European tradition during the winter holiday of Hanukkah. (This year, it runs December 10-17.) The festival calls for lighting candles for eight nights to commemorate the miracle of a small amount of sacred oil lasting for much longer than expected after the Temple in Jerusalem was sacked, reclaimed and rededicated. Jews also honor that oil by eating foods fried in oil, like latkes and donuts.

Wade did not serve latkes to Nathan but rösti, another delicacy in the broad family of fried shredded-potato delicacies. Fans of Misery Loves Co. will recognize — and salivate over — Nathan's description of the rösti:  "thick and square, topped with smoked salmon and crème fraîche … crisp on the outside and moist on the inside."

"This was," Nathan wrote, "the flavorful latke of my dreams."

When Nathan spoke with Wade, he traced the genius technique back to his Winooski days. It involves baking Russet potatoes not quite all the way done and then grating them by hand. The only other ingredients are salt, pepper and oil for frying.

The writer tweaked Wade's recipe slightly and pronounced the result possibly the "best version of latkes." Nathan did acknowledge that they lack onion and a few other standard ingredients.

Jewish Food Expert Joan Nathan Talks Recipes and Memories
By Melissa Pasanen
Food + Drink Features
I was happy to see Wade and Misery getting kudos and I'm sure latkes made with this method are dreamy. However, tradition is a hard thing to kick.

My tried-and-true method has been refined over decades based on a version from Cook's Illustrated magazine married with what I gleaned from my paternal grandmother.

Nanny, as we called her, was a first-generation American who modeled in New York City's garment district with Lucille Ball and never followed a recipe. She grated her potatoes by hand just like Wade does. I even have her grater, though I use my food processor.  Most years, I make around 200 latkes for our annual Hanukkah party, so I have a good excuse.

My latkes feature shredded potatoes and onion, a little potato starch, salt and egg. Over the years, I've learned that peeling the potatoes is unnecessary and I've also made them successfully without additional starch or egg. But I will never give up the onion.