Home Away From Home

Mi casa es su casa — for a price. That’s the philosophy behind Airbnb, an online booking website that’s part social network, part travel agent. Consider it CouchSurfing’s older, slightly more responsible sibling. The site allows users to list, search and book accommodations, ranging from a spare bedroom in someone’s house to a vacation rental on the beach. Jetting off to Austin, Texas? Hole up in a “hip remodeled” Airstream trailer for $60 a night. Save on pricey New York City hotels by opting instead for a $52 room in a shared Brooklyn apartment. Looking to splurge a little? Budget $1168 for an Umbrian villa in Italy.

In Vermont, Airbnb’s popularity is taking off among would-be hosts: Type “Vermont” into the site’s search engine, and more than 240 properties pop up. You could spend a night in a tree house at the Lincoln home of Ellie Bryant and H. Reynolds, or rest your head in a Goshen barn. In Burlington, some apartment and single-home dwellers are renting out spare bedrooms for between $35 and $70 per night.

Why are more and more homeowners — very few of them professionals in the hospitality business — opening their doors to travelers?

Lincoln residents Bryant and Reynolds will tell you that it’s purely a hobby. The quirky tree house adjacent to their home is the most reviewed Airbnb property in Vermont, and the couple say they delight in meeting the travelers who flock to their little retreat.

“Anybody who wants to stay in a tree house has got to be a pretty cool person,” surmises Bryant.

Amy Williamson, a Montpelier resident who rents out a spare bedroom, has a different motive; for her, being an Airbnb host is all about monetizing the extra space in her home.

For other hosts, it’s some combination of the two factors.

Burlington resident Janie Cohen rents out her riverside camp in Charlotte. “It’s such a magical place,” she says, over tea in the little cottage. “I wanted to share it in some way.” Practically speaking, though, the revenue has helped enormously with maintaining the nearly 30-year-old structure: Since listing the studio on Airbnb in 2010, Cohen has earned enough to put on a new roof and repair the exterior.

The revenues aren’t anything to sneeze at: Williamson, who aims to rent out her room for 10 days a month, makes enough to cover the property taxes on her Montpelier home. She calculated her room rate in part by working backward — deciding how much she needed to earn each month and then setting her rates.

For Williamson, who began renting the room following her divorce two years ago, the extra money made the difference between keeping her home and having to relocate.

“My goal was to be able to stay in this house, and I’ve been able to do it,” she says.

Of course, the money comes with strings attached. Hosts need to declare income from Airbnb on their tax returns, and, in Vermont, they must collect a 9 percent rooms-and-meals tax. Williamson is self-employed as a sign-language interpreter and considers herself pretty tax savvy. Even so, that latter tax came as a surprise.

“I wasn’t intentionally trying to avoid [paying it],” she says. “It just didn’t occur to me.”

Williamson got a nudge in the right direction when the state’s tax department found her listing on the Airbnb website and sent her a letter. She’s now paying accordingly. Bryant and Reynolds had a similar wake-up call. After their tree house was featured in a Boston-area television program, they were contacted by the tax department and by the town of Lincoln. Town officials pointed out that the property didn’t have a certificate to operate as a bed-and-breakfast. Now the couple is on the up-and-up, and their listing includes a note that their rate includes the rooms-and-meals tax.

It’s not just the Department of Taxes that’s paying attention to Airbnb. Megan Smith is Vermont’s commissioner of tourism and marketing. She and her husband ran an inn in Mendon for 13 years, and Airbnb makes her nervous, she says. What if a guest picks up bed bugs or head lice? What if someone gets sick? Licensed bed-and-breakfasts are inspected by the Department of Health, Smith points out, and work hard to maintain a certain level of professionalism and hospitality. While she’s sure that most Airbnb hosts are doing a fine job, she notes that those who aren’t properly certified, or aren’t paying the required taxes, aren’t playing on a level field. In a state that has more bed-and-breakfasts per capita than any other place in the country, according to Smith, that’s bound to raise some hackles.

“I understand the concept,” she says. “Part of me feels like it’s lovely.” And yet the hospitality industry, Smith goes on, requires training and professionalism that Airbnb hosts may not have. “It’s a serious endeavor. It’s much more than just opening your door and having people spend the night.”

Cohen says she realized just that after she became a B&B host overnight. She had to learn as she went along. Overwhelmed by laundry, Cohen purchased additional sets of sheets to make the turnover between guests easier. She began compiling information about the area for her visitors, and set out a book for them to sign. One morning she woke up, sat bolt upright in bed and realized she didn’t have liability insurance that would cover her if someone was injured at the camp — a problem she quickly fixed.

But Cohen still finds the system appealing, in part because it isn’t purely a business transaction. Airbnb handles all the financial details: Guests enter their credit card or PayPal information through the website, and money is directly deposited into hosts’ accounts. Airbnb takes a cut, but hosts don’t have to worry about bounced checks or swiping cards. The site also sends hosts a tax statement at the end of the year.

What’s left is an arrangement that feels somehow more social than economic. Hosts and guests alike prepare profiles, and when guests request a booking, the hosts can read previous reviews and learn about their potential visitor. After that, it’s up to them to accept or decline — a system that has raised concerns about possible discrimination.

Despite the “background check” provided by profiles, Airbnb hosts and guests alike have some reason to be concerned about security. The company received a big black eye after a guest trashed a woman’s home in San Francisco. Afterward, Airbnb scrambled to improve its customer service and insurance policies; it now offers a 24/7 hotline and $50,000 of coverage for property damage. On a portion of the site devoted to safety, Airbnb says it believes people are fundamentally good, but goes on to list numerous safety tips for guests and hosts.

Williamson took matters a little further before she rented out her room, which has a separate outside entrance. She put in an extra door with a lock that separates the suite from the rest of her house.

“I’m pretty trusting, but I’m also aware that I can be a little Pollyanna-ish,” Williamson admits. The lock allows her to rest easy, knowing there’s an extra barrier between her guest and her family.

Very few of Williamson’s guests are tourists. Some are visiting relatives in the area. Others are looking for a place to stay every now and then to cut down on long commutes from other parts of the state. Williamson doesn’t provide linens — from the beginning, she says, she knew she had no interest in taking on extra laundry — and has very little contact with many of her guests. “It’s been easy,” she says.

Bryant, on the other hand, revels in the social aspect of the service. She grew up in Washington, D.C., and says Airbnb brings a bit of the outside world to her corner of sleepy Lincoln.

“I miss people,” she says. “I miss conversation. We establish friendships with these people.”

Reynolds and the couple’s son, Will, built their tree house about six years ago as a father-son bonding exercise after taking a class at Yestermorrow Design/Build School,

After that, “Basically, the mice took it over,” says Bryant. “We figured we had to do something.”

Bryant and Reynolds were early Airbnb adopters in Vermont; only about 10 statewide properties were listed when they joined the service in 2009.

The tree house is braced between four maples, with a cozy double bed tucked into a loft accessible by ladder. Most visitors are city folk from New York or Boston looking to escape, and the whimsical tree house fits the bill. Other guests have come from as far away as South Africa, Argentina and Iraq.

Bryant and Reynolds have been adding amenities since joining Airbnb: They recently put in a hot tub and are installing an outdoor shower. They cook their visitors a big breakfast, and invite them in for conversation over wine and cheese in the evenings.

Their Airbnb revenues go into a separate account to pay for rooms-and-meals taxes, upkeep and tree house expenses. And with the remainder, Bryant and Reynolds have made a tradition of dining out on Sunday night, saying the departed guest “is taking us out to dinner.”

Says Bryant: “The extra money we use to play.” 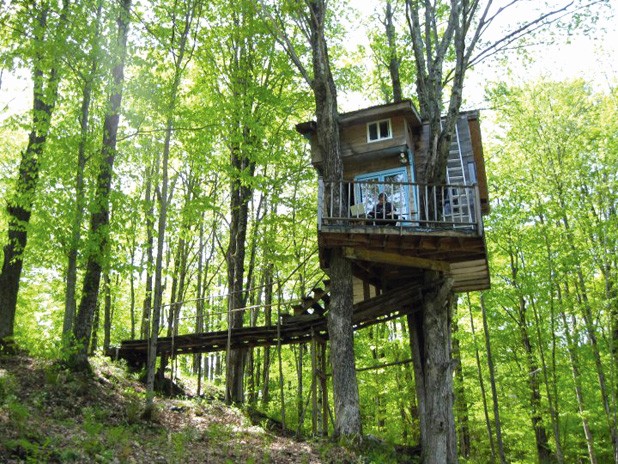