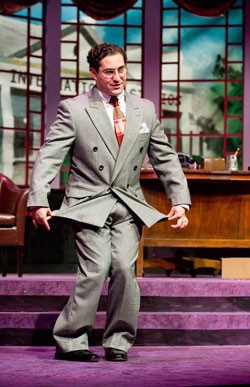 Gumption. If one word can sum up the theme of Gone with the Wind and the spirit of its feisty heroine, Scarlett O’Hara, it would be this saucy Southern synonym for tenacity and spunk. In 1936, Margaret Mitchell identified her novel’s central question: “What makes some people able to come through catastrophes and others, apparently just as able, strong and brave, go under?”

The essential quality, Mitchell believed, was gumption — which the author exhibited plenty of in her own life. When fragile health forced her to give up a newspaper career, she spent a decade secretly typing out the 1037-page tome in her tiny Atlanta apartment, showing manuscript pages only to her husband. And when the story went on to capture American hearts and outsell every book save the Bible, it took a gutsy Hollywood producer to bring the beloved text to the screen.

David O. Selznick had guts and gumption. His quest to render Mitchell’s magnum opus faithfully in Technicolor, however, sent him tearing through screenwriters like toilet paper. Playwright Ron Hutchinson reimagines the final frenzy of script-doctoring in Moonlight and Magnolias (2004): Selznick, writer Ben Hecht and director Victor Fleming all locked in Selznick’s office for five days, churning out the finished screenplay.

Hutchinson’s farce has the zany edge of a 1930s screwball comedy. The stunning set of the St. Michael’s Playhouse production perfectly captured the era’s visual language. And Kenneth Kimmins’ skillful direction reinforced the delicious sense of traveling back in time, as did most of the actors’ performances.

Irish-born Hutchinson is an accomplished playwright who also has spent two decades writing for television and film in Hollywood. His own work as a script doctor drew him to the story of Hecht’s emergency GWTW fix. “I’ve been all around the world in closed hotel rooms, from Libya to Morocco to Mexico, hammering out new scripts with ulcer-ridden, catatonic producers,” Hutchinson recalled in a 2007 interview. “The pressure is immense, there is craziness all around.”

Hutchinson distills the madness in Moonlight and Magnolias while also decanting great affection for Old Hollywood. The story and characters hew closely to the real events of February 1939. But the playwright’s poetic license also turns Selznick, Hecht and Fleming into archetypes of a bygone era: men of action and ideas driven by their passion for making celluloid magic.

The entire play takes place in the producer’s office — the crucible for creating cinematic immortality, from Selznick’s point of view. “It’s only in the movies where the dead can walk,” he reflects. “You know any other way to live forever?”

As the play opens, Selznick is feverishly pitching the GWTW rewrite to Hecht, who seems to be the only person in America who hasn’t read the book. Fleming soon arrives; Selznick has pulled him from directing The Wizard of Oz to replace George Cukor at the helm of GWTW. Jaded Hecht insists, “No Civil War movie ever made a dime,” and the writer struggles to follow Selznick’s description of the convoluted plot. To help, Fleming and Selznick act out the novel, scene by scene, with Hecht fashioning a script at the typewriter as they do.

Hilarity ensues. “The digestive juices get mixed up with the creative juices,” Selznick says. And so the mogul puts the trio on a diet of what he proclaims to be brain food — peanuts and bananas — brought in by his secretary. The pudgy Jewish executive and the macho WASP director become comical case studies in Bad Acting 101, playing the sashaying Scarlett, swooning Melanie and simpering Prissy as Hecht pecks away at the Underwood. Hecht is aghast at some of the story’s themes, but Selznick insists on staying true to Mitchell’s tale.

As fatigue drives them to the edge of physical collapse, the trio takes turns dismissing one another’s craft, motives and reputation. But in the end, they get the job done. Selznick’s vision is the driving force. He laments that his industry’s golden age may be over. “Before we turn the lights off, I want to make one great movie, to show just how good it could have been.” Fleming and Hecht predict a “turkey.” But of course the audience knows what a triumph the finished film will become.

Marty Keiser completely owned the part of David O. Selznick, even bearing a remarkable physical resemblance to the movie mogul. Just as the real Selznick threw himself into his work, Keiser embraced the role with zest, embodying his character’s driven spirit and zeal for filmmaking. He marched with the short, efficient steps of a field marshal, hands frequently clasped behind his back. His eyes widened behind wire-rimmed glasses, radiating Selznick’s determination to defeat Hecht’s cynicism and Fleming’s devil-may-care attitude through sheer force of will.

John Patrick Hayden showed a delightful gift for deadpan comedy as director Victor Fleming. He was off and running from his character’s charmingly profane opening lines: “I hate to kiss and run . . . but . . . I have 116 munchkins dead-drunk in the corridors or fornicating in the urinals of the Culver Hotel.” Hayden painted the arrogant, touchy director with kinetic vigor, slumping broodingly at times and then springing to life. The intense pressure gradually dents Fleming’s confident façade, however. By the fifth day, nonchalance and swagger vacillate with tears and fearful hallucinations.

Abby Lee portrayed Selznick’s beleaguered secretary, Miss Poppenghul, with the pert efficiency expected of a Girl Friday, always anticipating what the boss wants and providing what he needs. Her Noo Yawk accent and rapid repartee with Keiser greatly added to the show’s retro vibe. In fact, the performances of Keiser, Hayden and Lee all glowed with the larger-than-life energy of 1930s screen actors. They played the fast-paced farce without hamminess, and with unself-conscious glee.

As Ben Hecht, however, Richard Warner broke the spell. He seemed like a visitor from the present. His lines were mostly there — he stumbled over the lightning-quick dialogue a bit more than the others. But Warner’s characterization seemed anachronistic; he didn’t quite fall in with the screwball rhythms of speech or physical action. There was never a sense that his version of the screenwriter could have stepped out of a flickering celluloid frame.

Throughout the story, Selznick reminds Fleming that every detail matters for GWTW, even the shape of the ice for drinks. Ice cubes didn’t exist in 1860, so ice must be crushed, not cubed, in the movie. “One mistake and the whole illusion’s lost, it’s just a bunch of actors standing in front of wood and canvas,” Selznick warns. Hecht’s performance didn’t ruin the play, but it compromised the fantasy of being transported to another era.

And this is the magic of Hutchinson’s play, Mitchell’s book, and the brilliant film finally made from it: the power of fiction to sweep you into another place and time so convincingly that you feel you were there. And so you care when those worlds are gone with the wind.