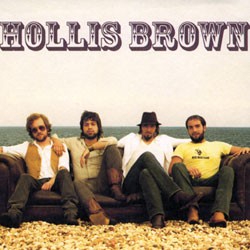 If the name “Hollis Brown” sounds familiar, it should. Bob Dylan’s grim ballad about a destitute South Dakota farmer is one of the poet’s more haunting and oft-covered works. It’s also the unlikely namesake of a promising young outfit poised to sell records. There’s nothing bleak — or particularly iconic — about Hollis Brown (the band). Instead, the kids from Queens line their eponymous debut with melodies that linger like a summer rain.

Fueled by Mick Monti’s surging vocals, Hollis Brown open joyously with “Show Love.” A swinging honky-tonk number The Black Crowes might have written, “Love” rolls cheerfully along. But without real muscle, it fails to leave much of a mark.

Conversely, the propulsive “Walk on Water” bares its teeth: “Mister Politician aimed at recognition / it ain’t your blood been spilled / your office is air conditioned!” There’s moxie here, to be sure, as Jon Bonilla’s wailing guitar cooks up a bluesy southern stew.

At their best, Hollis Brown are radio-ready. Still, at moments the band seems dogged by an identity crisis. Pitching from languid Americana (“Carolina, Carolina”) to perky prime-time singles (“Passin’ Me By”) betrays a frayed sense of focus. The latter track, burnished to a shine, seems bound for some Kate Hudson movie soundtrack.

Minus the depth of more seasoned acts — Kings of Leon come to mind — Hollis Brown’s middle feels a bit soft. “Completed Fool” and “Without Your Love” limp along under Monti’s quirky falsetto. Even the saloon hit “Bills and Ducks,” no doubt rowdy in New York clubs, is a little light on bite. One hopes the band’s will to rock will trump its urge to pop, as tepid ballads are no match for solid right hooks.

Edgier songwriting and a few years of hard living should do the boys some good. Already, Monti’s soulful turn on “Don’t Want to Miss You” is convincing. And the band sounds almost dangerous on “Till the Morning,” a frisky, neo-Doors firecracker.

None of this, however, could possibly forecast Brown’s stormy finale. Driven by lockstep percussion and howling guitars, “Bring It Down” might just land on the next release of the video game “Rock Band.” Easily the album’s ace, it’s a soaring jam and a candle on the cake. If this is a peek down the road — and I sure hope it is — then we’re in for quite a ride. Should they walk a more rugged mile, Hollis Brown will undoubtedly fare better than did their namesake.

The band plays at Nectar’s this Thursday, July 30.