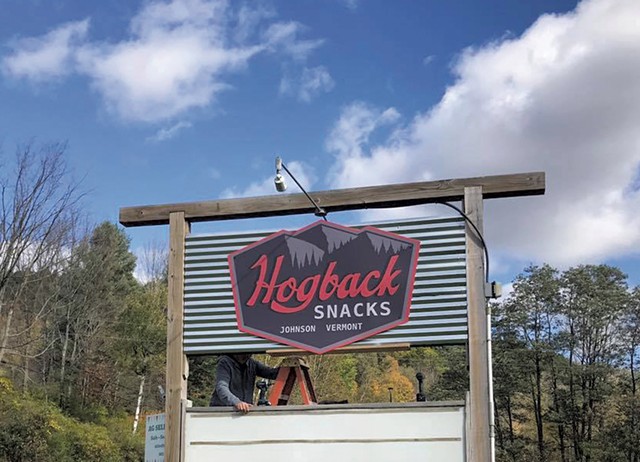 It's always sad when Vermont's summer snack bars close for the season. In Johnson, Hogback Snacks co-owner Carrie Ferguson hopes her new roadside eatery will help soften that annual autumnal blow. The spot opened on the outskirts of town, at 1015 Route 15, in late October.

Inside the building that was once home to the infamous Long Trail Tavern, and more recently, to the Landmark Tavern, Ferguson and her partners have swapped dingy barstools for a cheery service counter. "Our idea for the town was to kind of reverse [the building's] checkered history," Ferguson said.

Behind the counter, local teens sling summery fare such as fried seafood baskets, lobster rolls and oyster po'boys. Ice cream is in the works, the owner said, pending an additional state permit; think sundaes, shakes and cones of housemade or local ice cream.

Hogback chef David Wilcoxen makes everything from scratch, Ferguson said, from the local-beef burgers to fish-fry batter to the blue cheese dressing for the wedge salad. While the barstools may be gone, the restaurant does offer craft beer and wine in cans, along with Rookie's root beer and ginger beer on draft.

Patrons can entertain themselves with old-school console video games, including Ms. Pac-Man, Tetris and pinball.

The new restaurant's other owners include Ferguson's husband, Akash Parikh; her brother, Chris Ferguson; and his wife, Allison Tafuri. Locals will recognize the latter couple as the owners of Johnson's Downtown Pizzeria & Pub. Carrie Ferguson and Parikh also own the Hearth & Candle restaurant at Smugglers' Notch Resort.

Hogback Snacks is now open Thursday through Monday for lunch and dinner.

Correction, November 19, 2018: An earlier version of this story misstated the last business to occupy the spot where Hogback Snacks is now — that business was the Landmark Tavern.

The original print version of this article was headlined "Endless Summer"