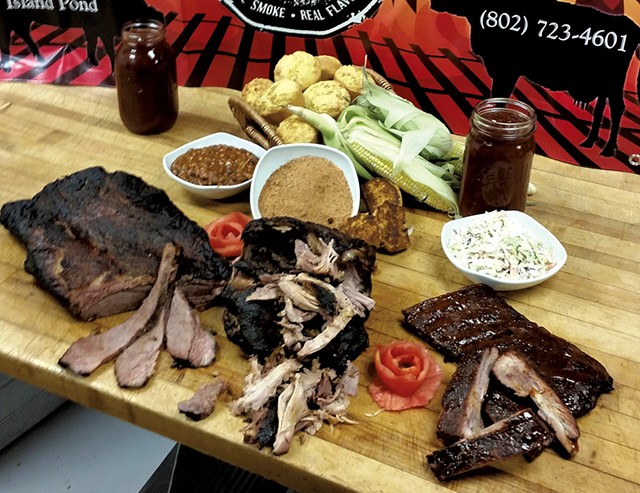 Hobo's Café, a restaurant that specializes in barbecue, opened on Mother's Day at 18 Cross Street in Island Pond. Canaan native Rob McComiskey returned to the Northeast Kingdom after eight years in Steamboat Springs, Colo., to be pitmaster at the restaurant owned by his parents, Robert David and Heidi McComiskey.

"We thought it would be a fantastic idea to bring this style of cuisine to a region that really hasn't been introduced to it," Rob McComiskey said.

The menu at Hobo's "runs the gamut," he added, featuring burgers, club sandwiches and open-face turkey sandwiches. Meatloaf made with bacon and sautéed peppers is served with mashed potatoes, gravy and a vegetable.

But McComiskey is most excited about the barbecue. You can eat it for breakfast in the brisket hash, which comes with home fries and toast — or sample it in side dishes, such as barbecued pit beans cooked in the smoker and flavored with the juice from pulled pork, brisket and a "little bit of love," he said. For supper, a pulled-pork platter includes two sides and a hunk of corn bread and maple butter.

McComiskey's parents work in human services. "They are fantastic cooks," their son said. "I lean on them quite a bit."

Being a successful pitmaster requires perseverance, patience and an "unconscious understanding" of what barbecue is, according to McComiskey.

"It was thrown in my face, more or less," he said. "I locked on, and I never looked back. It's my love; it's my passion. I'm a Vermont boy cooking Texas-style barbecue that I learned in Colorado."

The original print version of this article was headlined "Kingdom BBQ"