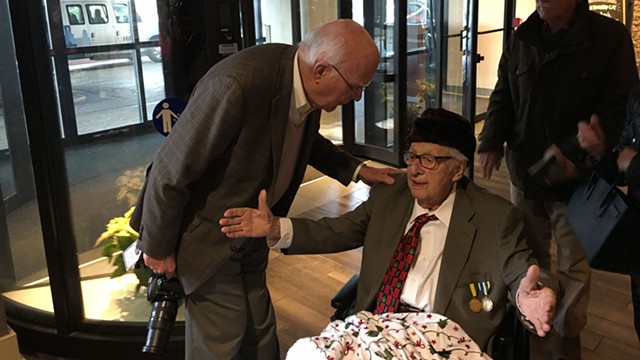 It was a festive scene on Sunday at the Hilton Burlington on the waterfront. A small squadron of winter-themed mascots and elves (plus the University of Vermont's mascot, Rally Catamount) filled the lobby, greeting the invited guests and posing for selfies.

At 11 a.m. sharp, the doors opened. Parents and children filed into the Adirondack Ballroom for one of the signature events of Burlington's holiday season: the 37th annual Pomerleau Holiday Party, hosted by the patriarch of the clan, 100-year-old Tony Pomerleau.

There were gift bags, ornaments, a temporary tattoo station and crayons at every table with place mats for the kids to color. Santa and Mrs. Claus worked the room and a five-piece ensemble played soft jazz versions of the holiday classics. There were speeches by Vermont's most prominent politicos, gushing in celebration of their host.

How gushing? Try this: "Much of Burlington's success is due to Mr. Pomerleau," said Gov. Phil Scott. "He's a role model for many in living the American dream. Thank you for everything you do for us every day, Mr. Pomerleau."

And this: "What Tony has done has been remarkable over the years," said Sen. Patrick Leahy (D-Vt.), whose wife Marcelle is Pomerleau's niece. "You are my favorite uncle."

The guests, almost 400 in number, included many of Burlington's neediest families, selected by the city's Department of Parks, Recreation & Waterfront in consultation with children's centers and community organizations around the city.

It was a day of unvarnished praise for Mr. Pomerleau, with a faint whiff of noblesse oblige in the air. Pomerleau sat in a wheelchair (his only visible concession to age), but he occupied it like a throne, and Vermont's leading politicians acted like eager courtiers. He was attended by the state's two U.S. senators, Leahy and Bernie Sanders (I-Vt.), and their wives, as well as Scott and Burlington Mayor Miro Weinberger. It's not very often you see all those people in one place at one time — let alone around a single table.

Congressman Peter Welch (D-Vt.) sent his regrets, "due to a family commitment," according to an email from spokesperson Kate Hamilton. "He has attended in the past and sees it as a wonderful event for children and a tribute to Mr. Pomerleau's commitment to the community."

As Scott told me, "Anytime Antonio Pomerleau invites you to an event, you show up."

The most effusive of the pols — and the most consistent presence at Pomerleau's side throughout the event — was Sanders, the notorious critic of the One Percenters.

"Tony Pomerleau came to this state without a nickel in his pocket," said Sanders. "He always knows where he came from. And he has not forgotten that ... He and his family are perhaps the most generous family in our state, and we thank them so much for all the good that they have done."

In an interview before the festivities got under way, Jane O'Meara Sanders recalled the origins of the Sanders/Pomerleau friendship — and the birth of the holiday party itself — during her husband's time as mayor of Burlington.

"We met with Tony, and we had the idea that we wanted to have a party where families could come out for a good meal and a family picture," she explained. "He was instrumental. We said, 'This is our idea. We have $500 to do this, so we're looking for contributions.' He stepped up right away."

A bit surprising that the idea came from Jane and Bernie. Seems a bit ... palliative ... coming from lifelong advocates of systemic change. A nice meal is always welcome, of course, but you still wake up hungry the next day.

O'Meara Sanders said the two men quickly discovered that, although they'd been political opponents before Sanders became mayor, they had a lot in common. "They're both really smart," she said. "They're both really committed to supporting people in the community, especially those in need."

As for the apparent irony in America's favorite billionaire-basher having a close friendship with one of Burlington's most influential rich men, O'Meara Sanders said this: "It's not that people are bad because they're millionaires or billionaires. It's the ones who are pressing to get more and more at the expense of the people. Tony is the antithesis of that. He doesn't care about getting more. He cares about giving more."

Still, this is the guy who walked into the mayor's office after Sanders was first elected in 1981 and said, "Bernie, you're the mayor, but don't forget: This is my town!" (An anecdote recalled by Pomerleau himself in a brief speech to the crowd.)

Maybe that's why Sanders and Pomerleau became such great friends: Each of them recognized a fellow alpha male.

There's a long list of wealthy men who don't give back to their communities, and Pomerleau deserves full credit for not being one of them. He's also a sharp-eyed businessman who can't be blind to the benefits of his generosity: easy access to government leaders and a sterling reputation. In a city that often treats its developers harshly, Pomerleau seems to sail above the fray.

By 1:15 p.m., the crowd was thinning out. Leading politicians are often the first to leave, citing the pressure of a tight schedule. Not in this case; the table of honor remained full. The great and influential lingered on until Mr. Pomerleau was ready to go.

Vermont's three major political parties are wrapping up a biennial task: reorganizing themselves, starting with the formation of town committees.

Town committees are the building blocks of political parties — the substance of the "grassroots" that party types are always nattering about. They are especially crucial in the battle for seats in the Vermont House, where money is in short supply, and retail campaigning is at a premium.

Just ask Vermont Rep. Don Turner (R-Milton). As house minority leader, he plays a lead role in recruiting and assisting candidates for the House. "Town committees are very, very important," Turner said. "Not just for a candidate, but for the entire caucus."

The proof, he added, is in House districts with multiple towns. "When some towns are organized and some are not, you really notice the lack of support [in unorganized towns]."

"Town committees are a base of support for volunteers, data entry, phone banks, get-out-the-vote efforts," she said. "All the core things you might need help with. Notes on Front Porch Forum, letters to the editor, going door-to-door with a candidate."

This year was a good organizing year for all three parties, but the Democrats fared best of all. Final figures aren't entirely in, but Vermont Democratic Party executive director Conor Casey estimated that the Dems will have upwards of 195 town committees, and perhaps as many as 200. That's at least 30 more than last time around, in 2015.

VDP political director Brandon Batham points to one specific House district. "We didn't have a town committee in Milton [in 2015]," he said. In 2017, they do. The Dems are hoping to turn the normally Republican two-seat district into a battleground, as Republican Rep. Ron Hubert resigned earlier this year, and Turner may relinquish his seat now that he's the full-time Milton town manager. With two "virtual vacancies" potentially on tap, as Batham put it, "It's vital to have a strong ground game." Having a town committee is a necessary first step.

He has a point. It's not that hard to form a town committee; all you need is a handful of folks in a room and two people willing to be listed as chair and vice chair. A skeleton crew is just as toothless as an unorganized town. But it's a starting point, and most town committees prove their mettle in ensuing campaigns.

For Batham, the number of town committees and participants is a positive indicator for 2018. "This is one of the most energized times I've seen," he said. "The base is motivated."

The good folks at VTDigger.org recently received a breathtaking gift: a $1 million commitment, to be paid over the next five years, from Vermont Country Store proprietor Lyman Orton and his wife, Janice Izzi.

Great news, but don't get any ideas about VTDigger canceling its end-of-year fundraising drive.

"This money will be used as part of a growth fund initiative," VTDigger founder and editor Anne Galloway wrote in an email. "We are actively seeking other donations for the initiative, which will be used to expand our newsroom and continue developing a sustainable nonprofit business model."

This is, she hastened to add, "a separate project from reader contributions that fund our base operations." So keep writing those checks, people.

The Columbia Journalism Review recently called VTDigger "the largest investigative reporting nonprofit in the country that is focusing on local or state news. Remarkably, it has happened in the nation's second smallest state."

Remarkable ... and troubling. If VTDigger is the largest, that means the process of developing post-internet business models for journalism in the United States hasn't progressed very far.

The Orton/Izzi donation is meant to help build a stable, long-term financial structure for VTDigger — and perhaps provide a template for would-be Diggers in other states.