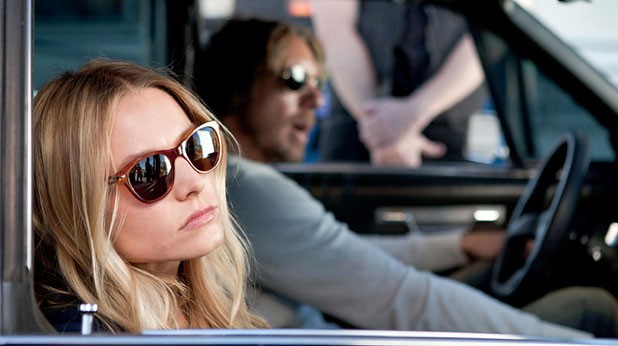 It’s sad for the audience, and sad because this action comedy is clearly a labor of love for comedian Dax Shepard, who scripted, codirected (with David Palmer) and stars with his real-life girlfriend, Kristen Bell. Unfortunately, Shepard seems to have expended most of his loving labor on crafting a hyperactive screenplay that will give you flashbacks to the worst Quentin Tarantino imitators of the 1990s.

What this means is that plot progression, such as it is, halts frequently for characters to engage in lengthy, would-be clever dialogues on unrelated topics. Playing a pair of lovers on a dangerous road trip through the American Southwest, Bell and Shepard bicker unceasingly about his un-PC language and choice of vehicle — a souped-up ’67 Lincoln Continental.

At least their grating fights and cutesy reconciliations could pass as characterization. But what about the long scene where two cops discuss a gay social app called Pouncer? (It becomes a running gag, though not a particularly funny one.) Or the even longer scene in which the film’s villain (Bradley Cooper, with dreadlocks) establishes his bad-assery by terrorizing a stranger he sees buying cheap dog food at the market? Cooper’s concern for canines might be darkly amusing if he ever managed to terrorize anyone else in the film — or the audience.

Shepard plays “Charlie Bronson,” a former getaway driver in the witness protection program. (The name he chose for his new identity is fodder for another gabfest that spells out what we already know: Dude is immature.) Cooper is the bank-robbing buddy on whom Charlie ratted; and Bell is Annie, a high-minded academic ignorant of her boyfriend’s seedy past. When she spies a great job opportunity, Charlie agrees to drive her to LA for the interview. Annie’s disgruntled ex (Michael Rosenbaum) wastes no time in telling the recently freed Cooper where his nemesis is headed, putting all the characters on a four-lane-blacktop collision course.

Annie has a doctorate in violent-conflict resolution — a joke that never pans out. Bell’s usual comic flintiness goes soft as she moons over Shepard, while he makes liberal use of his puppy-dog eyes and “What, me worry?” demeanor. They’re cute together, but not cute enough to sustain an 85-minute movie.

And much of that movie feels like a comic setup with no payoff. As the nation’s most incompetent U.S. marshal, Tom Arnold offers unremitting, unfunny klutziness. Cooper’s performance as a sensitive sociopath with poor fashion sense is the film’s most over-the-top element and the source of its funniest scene — most of which, if you’re curious, you will find in the red-band trailer. But he’s ultimately a footnote to a movie where the only other real laughs happen during the credits.

Some critics have lauded Hit and Run for its on-the-cheap car-chase scenes, which recall the golden, predigital days of Smokey and the Bandit. I’m the first to agree that old-school action deserves a comeback. But if that’s what you crave, you’re better off renting Tarantino’s Death Proof, or a genuine ’70s exploitation flick, than sitting through this mess.