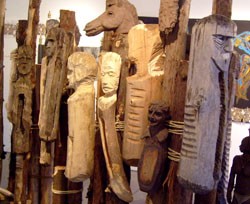 This year will mark the 400th anniversary of Samuel de Champlain’s first canoe trip on the body of water known by the Abenaki as Bitowbagok. Later, when asked what the place was called, the Frenchman simply replied, “It is named Lake Champlain.” Maybe Bitowbagok was too tricky for him to pronounce? The explorer’s immodest christening of Lake Champlain will be celebrated this year by its valley’s current inhabitants. The Firehouse Gallery’s exhibition “Veiled Lineage” — billed as “part of the city’s quadricentennial celebrations” — helps kick off the commemorations.

By highlighting the crosscultural influences on Vermont artists Terry Hauptman and Jerry Geier, the show reminds us of the multicultural currents of the Champlain Valley. And, just as Champlain’s watery namesake is long and narrow, so are the pieces in this show. Hauptman’s intricate mixed-media scrolls are up to 50 feet long; Geier’s installation of vertical slit drums includes pieces standing 9 and a half feet tall.

Most of Geier’s drums are lined up in the gallery as a 30-foot palisade collectively called “Convergence,” topped by the carved heads of spirits, humans and animals. On his website, the artist says the work examines “the convergence of people from all walks of life and cultures, communicating through the universal language of music,” and celebrates “the relationships between the Earth and all of its inhabitants.” Geier has absorbed an eclectic bunch of aesthetic stimuli, from Cycladic Greek figures to Polynesian, African and Native American anthropomorphic forms.

The roughly hewn drums resonate warmly when struck; while carving them, Geier taped and tuned the logs at every stage. The effigy heads contain various materials, including terra cotta and wood, and fascinating details. Rows of horizontal bands cut into many of the drums allow the drums to be played like large gueros; others are tied together with ropes, and some feature woodblock prints. Geier’s installation exemplifies visual art with a world beat.

Hauptman’s “Songline Scrolls” brandish their own array of images inspired by global art. “Diaspora,” a 19-inch-by-50-foot scroll, is like an abstract Torah. It has fancy finials and passages of sewing, as well as segmented woodblock printing. Short, vertical hash marks proceed along the scroll’s interior with the rhythms of Hebrew calligraphy.

In an unrolled segment of “Kira’s Song,” a 42.5-inch-by-50-foot scroll, the polychrome figures appear to be half Haida and half Mayan. Hauptman’s totemic images are separated by white space and outlined in gold paint. “The Singing of the Soul Is the Nature of Art, Herself” is another 50-footer, but this one appears on black paper with more involuted images. Hauptman maintains flat yet bright, limited color harmonies, and her materials include drawing media, thread and even splashes of glitter. Her execution of the scrolls seems obsessive, yet their creation is rooted in mysticism. The artist’s statement on Hauptman’s website declares, “The scrolls are spirit, musical pulses in motion, harmonic resonance.” In both Geier’s and Hauptman’s works, there’s more to the art than what immediately meets the eye.

A group of documentary videos entitled “Landmarks” appears as an adjunct to “Veiled Lineage” at the Firehouse. Shot on Vieques, Puerto Rico, by Jennifer Alfora and Guillermo Calzadilla, the videos show scenes of postcolonial environmental degradation caused by the U.S. Navy’s 60-year occupation of the island as a firing range. The navy left in 2003, but unexploded ordnance remains.

Champlain is said to have entered Bitowbagok in the company of a large Algonquin war party on July 4, 1609. Artistic explorations of that event will surely take many interesting forms this year, and perhaps raise a few piquant questions.