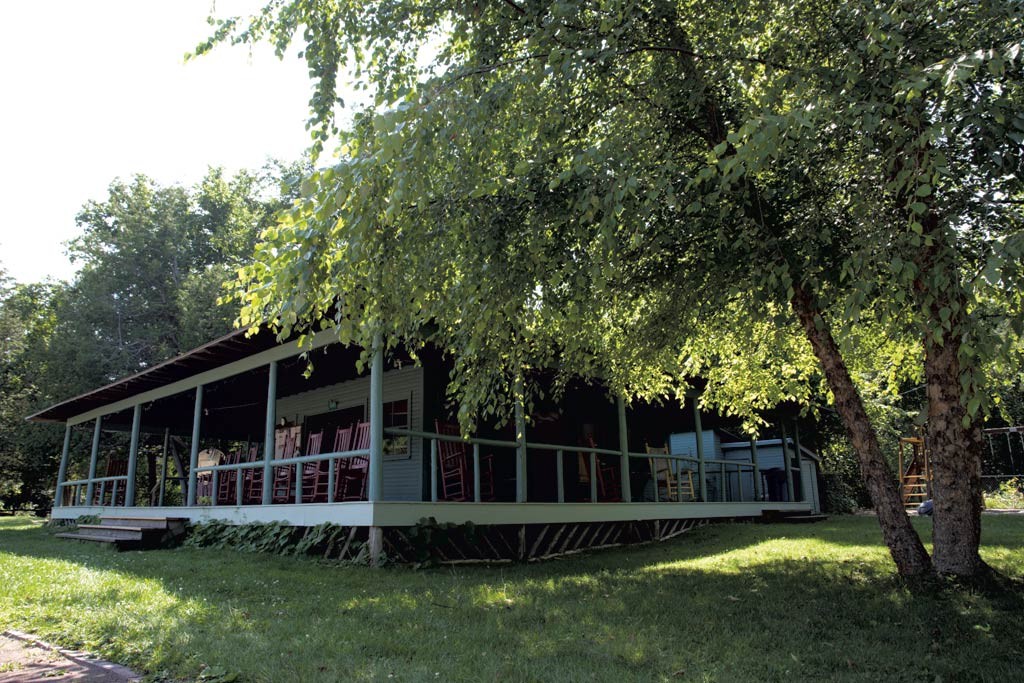 Not long after Susan and Jim Fitzpatrick first visited Thompson's Point more than three decades ago, the South Burlington educators began daydreaming about acquiring a lakeside camp of their own in the sleepy, rustic Charlotte community. A friend issued a wake-up call: "She said, 'Forget it, because nothing ever goes for sale,'" Susan Fitzpatrick recalls. "'If camps do change hands, it's always within the family.'"

A few months later, she spotted a tiny classified ad in the newspaper: "Camp for sale. Thompson's Point. Flat Rock." The couple and their two children, then 7 and 10, jumped at the opportunity. They've been vacationing at Thompson's Point every year since.

It's not hard to understand why. On this point jutting into Lake Champlain, the unpretentious and cozy seasonal homes exude a sense of North Country relaxation. The communal tennis court and clubhouse haven't changed much since the 1920s. Families stroll down dirt roads together. Kids scramble along the rocky shore, and seniors sit on shady porches while boats bob in the bay south of the point. 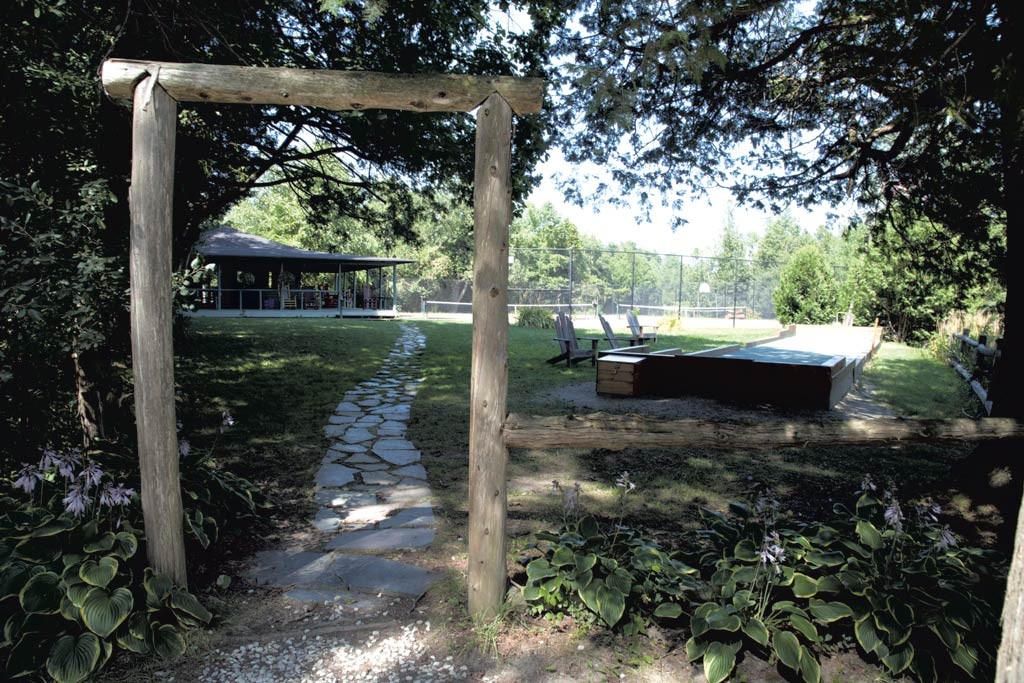 Just as Fitzpatrick's friend warned, for years it was hard to break into this historic lakefront community. But that's changing. The expense of keeping a camp at Thompson's Point has shot up dramatically in recent years. As older generations age, families begin having complicated conversations about caring for and passing on camps that have been theirs for decades. Drive the point's dirt roads and you'll note several "for sale" signs.

What hasn't changed, remarkably, is the feel of the place. Or so says Arthur Curtis, a Florida resident who still summers in the cabin his father built on North Shore Road in 1931.

"In many ways, it's exactly the same," says Curtis, who has visited Thompson's Point every summer since he first arrived in utero in 1938. It's a place of "comfortable porches and rocking chairs," wrote one lifelong visitor, Barlow Reid, in a personal history in 1999.

"It's very peaceful, and the lake is beautiful," Curtis adds. "It's just a great place."

That "great place" has been drawing vacationers for more than a century. Thompson's Point history buffs aren't sure when the first campers began summering at the point, but the oldest cottages date to the 1880s. By 1895, a small group had formed an association to draw drinking water from the lake. In the years following, the association grew little by little. More cottages sprang up — on Thompson's Point itself, and in the neighboring communities of Flat Rock to the south and North Shore to the north. (The three communities were historically quite distinct, but today all three are considered part of Thompson's Point.)

The earliest campers lived simply by the shore, many in platform tents. Larger, seasonal homes followed, along with a hotel in 1896. By 1911, the ferry Ticonderoga was docking daily at the long pier that once extended from the point. (Today, that pier is a pile of rubble; the hotel, never as grand as its advertisements promised, was demoted to a garage by a later proprietor.) In the early 1920s, members of the Thompson's Point Association erected their clubhouse and tennis courts. Wives and children often spent entire summers in Charlotte, while husbands held down city jobs and made occasional visits.

Over the years, the point was host to several notable residents and visitors. Supreme Court Justice David Brewer summered there, starting in 1895. So did Leslie Shaw, then-president Theodore Roosevelt's Secretary of the Treasury. When Roosevelt himself paid the point a visit, residents decked out their cottages with Japanese lanterns and colorful kerosene lamps, and greeted the president with a torchlight procession.

Today, Thompson's Point is a spot for vacationers with decades-long ties there, for relative newcomers who've purchased camps in recent years and for short-term vacationers who rent lakeside cottages for a few days or a week. Many camp owners on the point look to vacation-rental-by-owner websites to subsidize their getaway spots.

The actual land on which these cabins stand has long belonged to the town of Charlotte, not to the people who inhabit them. The town acquired the point and the surrounding land for $4,200 in 1839 to establish a "poor farm" — a place of last resort for those living on the margins of society, and an institution that persisted into the 20th century. Today, in addition to paying taxes on the buildings, camp residents must enter into 20-year lease agreements with the town. (They also pay for the community septic system that residents of the point installed in 1994.)

For a long time, Thompson's Point lease agreements cost a small, annual flat fee. Curtis recalls his father paying the town a mere $15 a year back in the 1930s.

"Now it costs me more to live here for two months than it does for my permanent home in Florida [for the rest of the year]," he says.

By 1994, when current town clerk Mary Mead stepped into the job, Charlotte had at least three different formulas for the lease agreements on the books. Some yielded low rates — a few hundred dollars a year, and in some cases, even less.

When the town updated the lease agreements in the '90s, its action sparked a lawsuit from some residents. The disputes were ultimately resolved, and today all Thompson's Point lease payments are calculated by a single formula: The fair-market value of the land is multiplied by the total nonresidential tax rate, which result is then multiplied by 105 percent.

It's expensive for residents — and a windfall for Charlotte.

"They pay a lot of money into the town," says Mead, who last March collected nearly $800,000 in rent from Thompson's Point residents. That's more than half of Charlotte's total revenue from nontax sources. For camp owners, it means paying a hefty fee on land that's only open for residence from mid-April through October.

The town benefits in other ways from the enclave, too. Mead says residents routinely walk the pleasant dirt roads that connect the camps. In the winter, Thompson's Point is a popular spot for cross-country skiing, snowshoeing and ice skating.

Meanwhile, the point's rich history lives on, particularly in the cottages on Thompson's Point proper; 33 appear on the register of Vermont's historical buildings.

Dorothy Naylor, who lives near the end of Thompson's Point, leads the way through the cottage where she has summered since 1967. The oldest part of the house was built in 1897, the "new" addition in 1915. "Ours is still the old 'studs and sheeting,'" says Naylor, meaning the house has no insulation.

Upstairs, the dividing walls between the bedrooms stop well short of the high, lofted ceilings. "Some people refer to them as 'abstinence partitions,'" jokes Naylor's friend Carolyn Coleburn, who spends her summers down the lane at a camp near the Thompson's Point clubhouse.

Coleburn has been summering at Thompson's Point for eight decades. Her parents first came up from New York with her and her siblings in 1934, when she was just 4 years old. That year, they rented a cottage on Flat Rock, a summer community largely inhabited by Methodist ministers. They burned kerosene lamps and cooked over coal stoves.

Coleburn remembers that when Vermont Light and Power came to electrify the road, one of the resident ministers adamantly blocked the way: There would be no electricity on Flat Rock, at least for the time being.

Even now, much of the wiring in Naylor's home is the old knob-and-tube style typical of construction between the 1880s and 1930s. She and her husband have brought in an electrician to convert the system, but it's been expensive, and slow going — with occasional unattractive results. Modern electrical cords, she notes, are a lot harder to camouflage than the old-fashioned version. 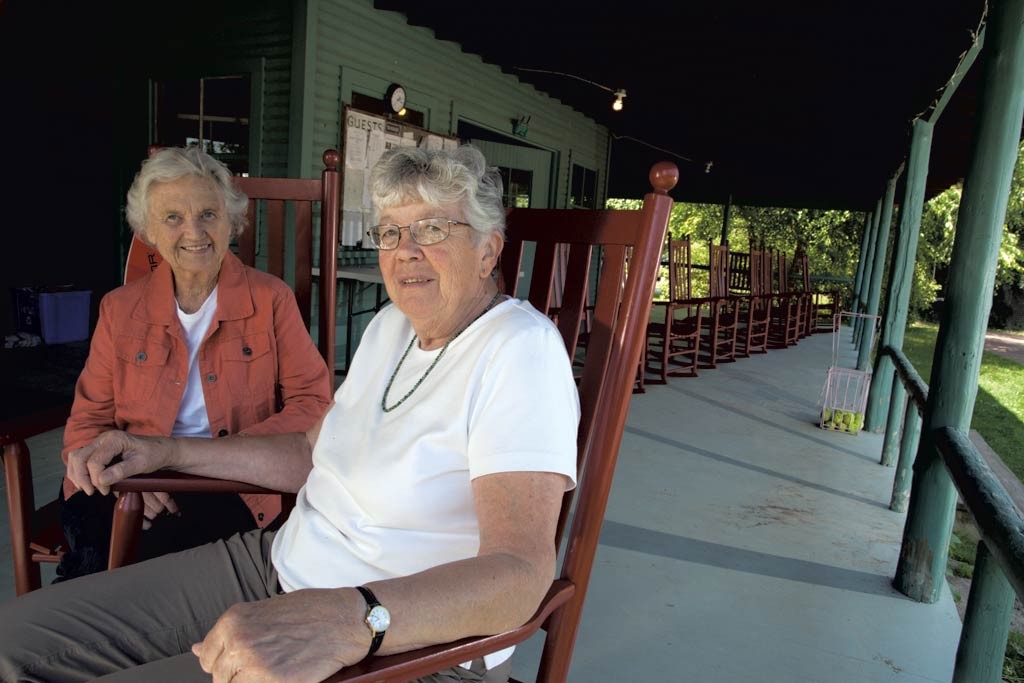 Down the road from Naylor's home, Coleburn shows off her own cottage, which her father built and furnished for $10,000 in the 1930s. She's concerned by how expensive Thompson's Point has become over the years, and says the schoolteachers and middle-class administrators who once made up the fabric of this community are often priced out today.

The good news for newcomers, though, is that when they buy into Thompson's Point, "they're buying into the community," Coleburn says — and that community tends to welcome them with open arms.

"It's like an old small town," Coleburn concludes with a smile, before returning to her screened-in porch for the afternoon.

The original print version of this article was headlined "On Point"